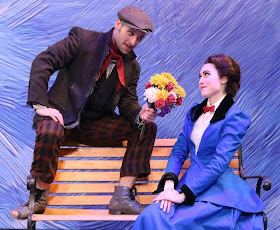 For those of us familiar with Disney’s 1964 family film classic, Mary Poppins, featuring the memorable chemistry between Julie Andrews and Dick Van Dyke, it might be understandable to wonder how a stage version (this one opened on Broadway in 2006) featuring local talent could possibly measure up. But perish the thought. This is, after all, the Players Guild Theatre, and just about every aspect of this mainstage offering is, as the title of one song suggests, practically perfect.

Directed by Michael Lawrence Akers (who also choreographed the show along with Bart Herman), the well-practiced cast is, in a word, extraordinary. The big ensemble songs are executed with a practically tribal intensity, replete with luscious harmonies and commanding choreographic bravura (even the final curtain call is an electrifying act in itself), all skillfully synced with the vibrant live orchestra led by Steve Parsons. And the set pieces designed by Joshua Erichsen, especially the chimneyed London rooftops spread across the stage in Act Two, are impressive.

In the title role of the nanny hired to serve the troubled Banks family in 1910 London, Meg Martinez is an utterly magnetic presence, even if she does seem a bit nervous hanging on to her flying umbrella. She’s an eminently gifted singer as well as very attentive to her character’s more subtle psychological underpinnings.  Yes, she’s genuinely bubbly and loving. Yet despite her infectious charisma, she’s also a wise loner in a complicated sort of way, and fully capable of answering any sassy challenge to her position with sardonic wit.

Those challenges come primarily in the form of George Banks, the family patriarch with misplaced priorities, and early on, the rambunctious children, Jane and Michael. As the irascible Mr. Banks, Micah Harvey is compelling in his own right, obsessed with his job as a banker and exuding a chilling detachment from his children as well as his wife, Winifred, played by Amanda Medley. Like the children, she’s starved for really authentic love. Medley’s piercing, bittersweet voice is a poignant embodiment of fragility, longing, and frustration initially, but as the story progresses, we watch her gather confidence when her hopelessness is palpably transformed into family healing. Through it all, young Brooklyn Fockler as Jane, and Adam Petrosino as Michael, perform with endearing  - at times even startling – panache. To quote another iconic song, Supercalifragilisticexpialidocius, they “…always sound precocious.”

Also quite astonishing is the vivacious energy that the versatile Justin Edenhofer stirs up in his role of the street-hardened yet tender Bert (Dick Van Dyke’s role in the film). He’s something of the amiable ringmaster of ceremonies here. And nowhere are his lithe and limber capabilities more  apparent than in the thrilling ensemble number, Step in Time, wherein he’s literally soaring above the crowd, gingerly stepping across the twirling tops of wire brooms held aloft by his fellow Chimney Sweeps. An equally enchanted scene ensues a little earlier in Act Two as Michael (Adam Petrosino) gleefully guides a spot-lighted kite that dances in the air above the stage during Let’s Go Fly a Kite.

Among other delectable highlights are the hilarious performances by Julie Connair and Matthew Heppe as the easily-panicked household servants; Joey Cogan as both an animated marble statue in the park and Jane’s haunted toy doll, Valentine; and Annie Giancola as the stern and spooky Miss Andrew, a “holy terror” of a nanny who can sing with operatic intensity.

It’s far more than just a spoonful of sugar that makes Mary Poppins’ magical medicine go down with such efficacious and certainly entertaining, results. Sweet, even syrupy, to be sure. But more importantly, this wondrous concoction is also laced through and through with an earnest message of real kindness and compassion – enough to soften the hardest of hearts “…in a most delightful way.”