Evocations: The Art of Martin Bertman 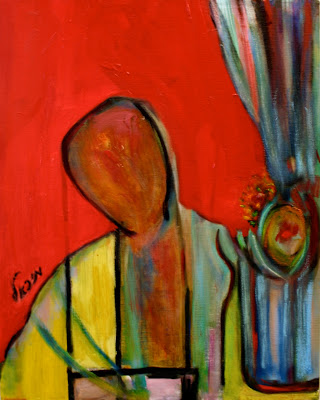 Evocations: The Art of Martin Bertman
By Tom Wachunas

My first encounter with a Martin Bertman painting was in 2008 at Second April Galerie in downtown Canton. Call it a summoning. From 20 paces, a small piece called “Before Awakening,” one of the 25 Bertman works (oil, acrylic, watercolor, and mixed media) currently on view at the Canton Museum of Art, is a portrait that, despite being faceless, beckoned with great insistence. As if reconnecting with a long lost friend, I’ve been awakening to his work, caught in its mesmerizing thrall, ever since. And so it has truly been an honor and gift most memorable that I have had the opportunity to curate this show that I call “Evocations.”

Bertman’s configurations – some abstracted, some more clearly representational - reside in a place both primal and modern. Here, a raw primitivism and a pictorial refinement resonate with equal intensity - like dance partners entwined in an ever moving, passionate embrace. While it is apparent that a number of historic influences (Symbolist, Cubist, Surrealist, and Expressionist, to name some) are threaded throughout his ouvre, the artist has deftly personalized those sources and re-organized them into a unique, compelling visual vocabulary of intriguing motifs and emblems. Yet for all of its personal content and sometimes obtuse symbolism, this is an iconography that nonetheless evokes an accessible, deeply human spirituality.

Evokes what, exactly? ‘Human sprituality’ embraces a decidedly broad canvas, as it were, of painterly exploration. Bertman’s surfaces often have a tactile physicality, though not of the heavy impasto sort. His subtler brush strokes – whether sweeping and lambent (as in “O’Keefe’s Desert”), or mincing and stippled (as in “Moses”), are invested with energetic, gestural spontaneity. His imagery can be both familiar and approachable (“Cubist Still Life” and “Large Leaf,” for example), as well as inchoate and elusive (“Night Birth,” or “Light and Dark”). The most consistently abiding conceptual element throughout these pieces (representing approximately 20 years of work) though, is their narrative resonance. There are fascinating tales being “told” here, some with gravitas, some lilting and innocent. In that, Bertman is as much a thinker and storyteller as he is a painter. And these visual voicings revel in a superbly poetic language, generously imbued with potent mystique.

Look long enough, and I think you’ll feel somehow drawn to not just the artist’s private musings about being alive, but also into the rich milieu of collective human thinking about history, myth, and matters of the soul. Not so surprisingly, then, after you read Bertman’s statement posted with the exhibit, you would hopefully sense how these are indeed images a life-long teacher of philosophy could or would make.

Residing in many of Bertman’s works is a distinctly European aesthetic sensibility, often evoking the spirits of Paul Gauguin, Marc Chagall, or Henri Matisse, among others. And the color! Always the color – sumptuous, intense, vibrant like the Fauves, emotionally gripping like Van Gogh, playful like Picasso.

Yet always distinctly Bertman. Bertman the painter/ philosopher, the synthesizer, the weaver of tales. The celebrator of seeing. The sublime evocateur.