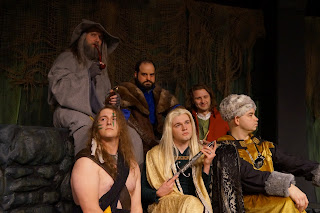 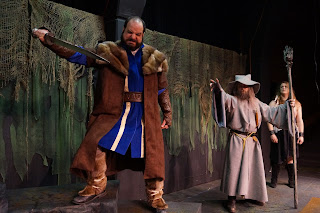 For this Players Guild production of The Hobbit (adapted by Markland Taylor and based on the classic 1937 novel by J.R.R. Tolkien), director Micah Harvey was a man on a mission. He must surely have felt a solidarity with the central character, a hobbit named Bilbo Baggins, who was recruited by the wizard Gandalph to accompany a dwarf named Thorin to hunt down the evil dragon Smaug, and steal back its ill-gotten treasure. Harvey’s dragon, if you please, was to somehow transfer the fantastical dramatic and visual sprawl of Tolkien’s narrative – already imprinted on pop culture as an epic film trilogy - into the unlikely and otherwise tight confines of the Guild’s arena theater. Even more challenging is the fact that Markland Taylor’s very compacted stage adaptation unfolds in only about 90 minutes with a cast of just six actors.

This small band of performers has to in turn play a bevy of interconnected roles depicting dwarves, elves, goblins, trolls, and assorted other woodland denizens. A daunting task, to be sure. But aside from some passages when the overall dialogue energy and expressivity becomes a bit lethargic (arguably as much a flaw in the writing as it is in audible delivery), it’s a task well met here with notable versatility and panache.

Three of the actors have single roles. Douglas Lizak, as Bildo Baggins, turns in a warm and intricately nuanced rendering of the reluctant and nervous hobbit, who much prefers simple creature comforts - such as smoking his pipe and eating favorite foods on his idyllic home turf - to stalking a dragon in forbidding lands. He’d rather be called “expert treasure hunter” than “burglar,” and much of the story embraces his struggle to realize his latent courage and inventiveness that prompted Gandalf to enlist him in the first place.

But Bilbo’s travelling companion, the dwarf Thorin, played by Bobby Severns, doesn’t initially share Gandalph’s faith in the jittery hobbit.  As Bilbo’s more confrontational counterpart, Severns captures his character’s sardonic and feisty nature with memorable finesse.
In his role of Gandalph, Jonathan Tisevich is both a commanding and at times gently understated presence. He’s at once the tender encourager and the powerful, stern mentor - a mystical catalyst and embodiment of fatherly optimism tempered with cautionary wisdom.

Meanwhile, the three remaining actors in the cast each have multiple roles of varying durations that nonetheless call for all sorts of postures and attitudes, ranging from the convincingly regal or militant, to the just plain silly or malevolent. In one of several scenes worth the price of admission, Russell Jones, Corey Paulus, and Jacob Sustersic are particularly spectacular – and hilarious – as three gargantuan trolls apparently made of stone. Bellowing in deliciously gravelly voices, they bicker over what do with the cowering Bilbo. Their sculpted costumes – a marvelous collaborative concoction by director Harvey, local artist David McDowell, and costume designer George McCarty – are works of art in themselves. A similar sculpted and kinetic marvel is the dragon, Smaug, voiced in explosive, bone-rattling tones by Sustersic, who also plays Gollum. In that role, he’s utterly startling in his frenetic writhing and leaping, all the while spitting out his urgent and faithful re-creation of that horrible and familiar voice from the films - a terribly throaty and liquid deformity.

The combined technical works of scenic designer Joshua Erichsen, lighting designer Joseph Carmola, and sound designer Scott Sutton constitute a stellar “performance” in its own right. While static, the multi-tiered set can nonetheless evoke dense forests, rocky terrain, or darkened caves via the remarkably fluid light changes amid smoky mists. The richly layered recorded aural effects include bucolic music passages alternating with night sounds near and far, soothing as well as alien and terrifying.
So did Micah Harvey and company subdue their dragon and bring home the gold, as it were?  Is this ambitious mission, this highly edited epic by the Players Guild, a success? Given the sheer breadth and complexity of Tolkien’s narrative vision, in a manner of speaking you could call it a wholly enchanting some of its parts.
The Hobbit, at Canton’s Players Guild Theatre, 1001 Market Avenue N., Canton, Ohio,  THROUGH APRIL 24 / Performances at 7 p.m. Friday and 2 p.m. Saturday and Sunday / Tickets: $16 for adults, $12 for 17 and younger, at 330.453.7617 or  www.playersguildtheatre.com