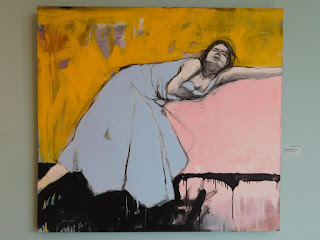 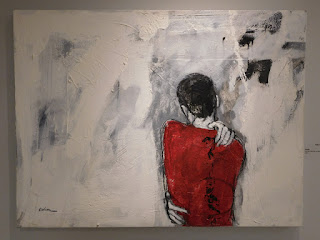 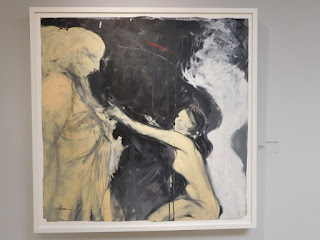 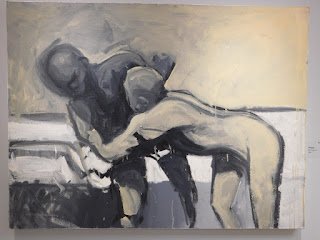 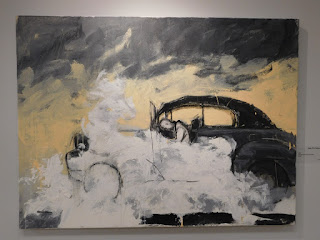 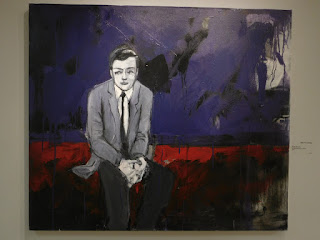 “It's really absurd to make... a human image, with paint, today, when you think about it... But then all of a sudden, it was even more absurd not to do it.”  -Willem de Kooning
“I think there has to be an interesting transformative process between your perception of reality and making the paintings. If you are just trying to render what you see you are not entering into a transformative process. And that's what makes a good painting: the process of transforming and the willingness to leave reality behind.”   -Susan Rothenberg

There’s a dichotomous, sensate tension that saturates just about all of John W. Carlson’s pieces here. It’s as persistent as the ripe, visceral oil paint that sits on and within his canvas surfaces in much the same way some mysteries and riddles can chronically tease or vex the mind.  So maybe the best introduction to his work would be for you to click on this link and read his statement, which is a beautiful poem by Joe Psarto:
https://johnwcarlsonstudio.com/artist-statement/
The aforementioned tension comes initially in the way Carlson marries his representational figures, or “characters,” to his abstract grounds.  Stylistically, there’s no bravado of illusionism or superficial preciousness in the way he draws the heavily contoured people we see. They exist in dense, truncated spaces -  ambiguous, nonobjective fields that seethe with painterly activity. Ironically, in many of Carlson’s pieces, the almost generic simplicity of figural rendering can push our attention to the intense gestural energy of paint around them, giving the backgrounds a dramatic life and personality all their own.
I keep coming back to Carlson’s statement - the Psarto poem - and a few particularly resonant lines: ‘battles and tranquilities,’ and ‘intervals of violence and peace, as in a man’s history.’  History… though not in any conventionally narrative sense.

The paintings aren’t illustrations of stories as such, though you certainly wouldn’t be wrong to think that they somehow hint at the aritst’s personal psychology, a narrative of emotional states, or perhaps cathartic circumstances of his life. In general, they exude a sense of arrested flux. While many specific visual clues and cues appear to have been obliterated, some remnants seem to still lurk under layers of thickly brushed, scuffled, and rubbed paint. Carlson may be at once erasing memories and creating new ones, yet what consistently remains after all his surface action - whether frantic and quick, or nervous and tentative - is always a human figuration. If there are conflicts and tensions to be remembered or resolved here as laid down by the artist’s hand, we the viewers have just as much a hand in deciphering them. Fill in the dense painterly blanks and blotches with your own history, because you’re already a part of the implied drama simply by virtue of looking at them.

This art is a compelling reminder that painting is a truly unique language comprised of many dialects, many of which conceived to formulate what might otherwise be impossible to manifest or communicate. Carlson speaks in tongues, as it were, and his fluency is very well suited to explaining the inexplicable…if that be possible.

Hello Tom.
It was wonderful to meet and talk with you last night at Massillon Museum for the opening. I greatly appreciated your kind and insightful comments about the work, but also the talk of art in general and how you have chosen for now, to use the written word to express yourself was fascinating. I would like very much to get together again soon for a coffee and continue this. Thank you again. If you would like to email me please do; carlsonstudio@gmail.com.