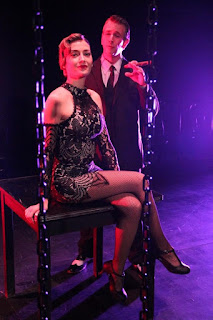 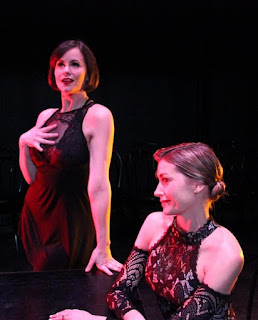 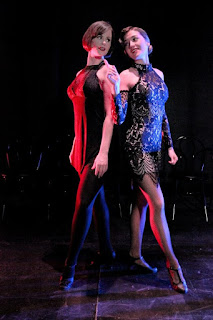 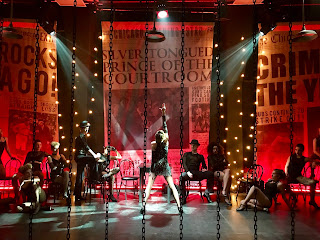 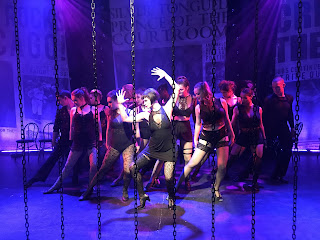 Here’s a curious prequel to the riotously titillating Players Guild Theatre presentation of Chicago, directed here by Jon Tisevich and, by the way, now sold out for its entire run through April 22.  Even as we of the audience are busy finding our seats in the Guild’s downstairs arena space - and before a scripted word was spoken, a song sung, or dance danced – ensemble performers are casually stretching, bending, pacing, and posing inside the effectively stark set designed by Joshua Erichsen. (We would later see them again in the same scenario during the intermission.) Some of them look lost in thought. Some whisper to each other furtively. Others peer out at us with a lascivious grin, or a yearning glance, or a threatening stare.

It feels as though they’ve been living there long before we arrived, caged in a cloudy light behind rows of thick chains hanging down like prison bars from the ceiling. They seem poised to break out. And break out they do, in a manner of speaking. These marvelously talented performing artists, along with the sizzling offstage orchestra conducted by Steve Parsons, go on to topple theatre’s proverbial fourth wall with all the aplomb, polish, and panache you’d see and hear in a Broadway production.

This musical ode to 1920s Chicago is set against the backdrop of local tabloid headlines screaming scandal and judicial system corruption. It’s a relentlessly biting look at criminal celebrity wherein we meet Velma Kelly in the iconic introductory song, “All That Jazz.”  She’s a vaudeville showgirl confined to the women’s block of Cook County jail, awaiting trial for murdering her husband and sister after she found them together in bed. As we hear during the gleeful writhing and stomping of “Cell Block Tango,” performed with several other “merry murderesses”, they had it comin’.

Heidi Swinford is devilishly commanding as Velma. With a strong, dynamic singing voice and dance moves to match, she gives us a deftly composed portrait of conniving desperation, driven by a viperous ego colored with gritty sarcasm. Things get decidedly dicey when another vaudevillian murderer, Roxie Hart, shows up and steals Velma’s thunder. An equally gifted singer - and electrifyingly lithe dancer - Keitha Brown, as Roxie, delivers a compelling picture of giddy complexity. For all of her fetching naïvete, she’s fiercely determined to become a vaudeville star at any cost. It’s a pursuit she brings to light in a riveting confessional soliloquy that accompanies her lusty, slinky chorus number, “Roxie (the Name on Everyone’s Lips)”. How can anyone be so decidedly childish and deliciously malicious at the same time? Fascinating.

Speaking of malicious, Aaron Brown plays the debonair crooner and defense lawyer, Billy Flynn, with memorable relish. He’s a smooth-talking shark, a money-mad, narcissistic media manipulator. One of the evening’s most hilarious scenes transpires in “We Both Reached For the Gun,” featuring the attorney as a ventriloquist puppeteer happily pulling Roxie’s strings.

Other highly noteworthy performances include Kathy Boyd as Matron ‘Mama” Morton. She’s the earthy cell-block supervisor who glibly admonishes her residents, “In this town, murder is a form of entertainment.” With a big heart and infectious swagger in her voice, she promises reciprocal loyalty in her song, “When You’re Good to Mama.”

Meanwhile, on the outside, Allen Cruz is wholly endearing as Roxie’s gentle, neglected husband, Amos. His innocent demeanor recalls the fumbling awkwardness of a young James Stewart. His poignant and funny song bemoaning his social and marital invisibility, “Mr. Cellophane,” is the evening’s most tender moment. And then there’s Micah Harvey playing Mary Sunshine, a gushy gossip columnist in drag. Miss Sunshine goes unabashedly overboard in her sympathy for Roxie. Harvey sings “A Little Bit of Good” with all the gut-splitting earnestness of a dubiously-trained soprano belting out an aria. It may be very bad opera, but it’s gloriously entertaining nonetheless.

Throughout the evening, the choreography by Michael Lawrence Akers is a character unto itself. Akers has successfully melded the jazzy spirit of Bob Fosse with a unique, sensual intricacy that is at times ferocious.

While Chicago treads salaciously along a border between satire and parody, somehow it doesn’t feel right to think of it as mere farcical escapism or irrelevant fiction. Maybe it’s a piquant metaphor. Real life these days seems more than ever driven by insatiable social appetites for debauchery and scandal, or for the rationalizing of our celebrities’ moral turpitude, or the self-congratulatory pleasure we take in witnessing their demise. Is the audience for such things as complicit as the perpetrators? Is Chicago, after all, an indictment of all of us?

Yikes. Maybe I’m overthinking. Then again, leave it to the supremely skilled artistry present in this Players Guild Theatre production to offer something so thought-provoking that it resonates long after we’ve gone home laughing.