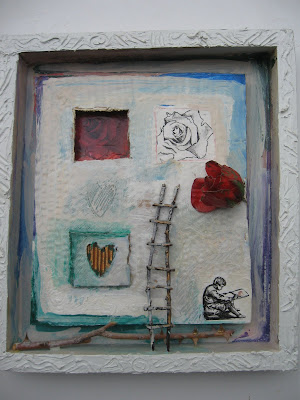 Hanging in my home are still a few assemblages from 2001- 2002 that I exhibited at Second April Galerie’s inaugural location on Cleveland Avenue. Not a day goes by when they don’t pleasantly remind me of my first meetings with gallery founders/ proprietors Brennis Booth and his partner, Todd Walburn. It was their sincerely encouraging, enthusiastic response to those then- new pieces that further fueled a personal “renaissance” after a long (10 years) and difficult hiatus from making art. I’ve been showing work at their gallery ever since, and can’t be grateful enough.

Long before there was any of the hype and hooplah about downtown Canton’s “arts explosion” there was Second April Galerie. When it relocated to Sixth Street Northwest in 2003, it was a wondrously strange and beguiling oasis, a lone salon of artistic possibility. But this once cultural anomaly in a practically (but for the historic Palace Theater) forgotten urban landscape represented a truly seminal, daring vision that would go on to inspire a phenomenal in-kind community response. Since moving to its current Cleveland Avenue address in 2007, in the heart of what’s now routinely called the arts district, Second April Galerie is still very much a magnetic, vital presence in the transformed (and still transforming) downtown arts milieu. Again, I can’t be grateful enough.

And so, in the wake of Brennis Booth’s recent ordeal with major heart surgery, it thrills me to the marrow to see the appearance of The Brennis Bunch, some 217 individuals (at last count) gathered on Facebook. Many thanks to artist Sarah Winther Shumaker for initiating it, and to all who have signed on. This ebullient, indeed phenomenal outpouring of care and support for Brennis and Todd is a marvelous testament to the impact they continue to so lovingly make on the arts community and beyond. Meanwhile…

Dear Brennis,
During and long after your time of healing and recuperation, may you remain, as the name of your gallery suggests, a constancy of bright renewal and inspiration to us all. God Bless you and yours.