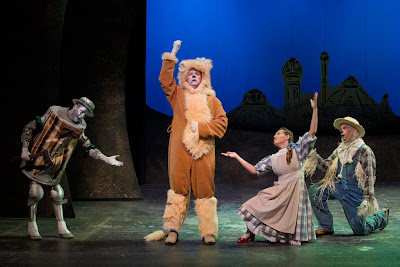 There I was, on opening night of the Players Guild production of The Wizard of Oz, happily anticipating the haunted forest scene. By this point I had successfully disabused myself of the fruitless temptation to make too many comparisons to the 1939 movie classic. But before any staged version of that iconic, chilling decent of the winged monkeys could transpire, the frightened foursome (Dorothy, Scarecrow, Tin Man, and Cowardly Lion) are attacked by the pesky “Jitterbug” sent by the Wicked Witch to, as she had just explained to her minions, “take the fight out of them.” Once bitten, the victims helplessly succumbed to paroxysms of dancing the - you guessed it – Jitterbug.

This scene never made it into the movie. Some have since posited that it would have dated the film too specifically, or that the dance - regarded as somewhat scandalous in its day - was a bit too adult for young audiences (an objection that seems laughable by today’s standards). In any event, aided by Michael Lawrence Akers’ effectively expressive choreography, the dance was here performed by all – including Mary Vaccani as the Jitterbug - with delicious abandon. And in that, the frenetic number embodied the remarkably supple energy of this production as a whole, inventively directed by Craig Joseph.

He wisely chose to bring to light a refreshingly different dimensionality to many of the scenes, songs, and characters that the film had so firmly cemented into our memories and expectations. “NO ONE, “ he writes in his program notes, “can be Judy Garland or Bert Lahr like Judy Garland or Bert Lahr.” True enough. Nonetheless, this fine cast, while certainly honoring the original script with notable skill and faithfulness, injects it with some surprisingly new, exciting flavors. In singing “If I Only Had a Brain”, The Scarecrow is joined by three hilariously heckling crows . Tin Man’s “If I Only Had a Heart” is rendered a la vintage crooner style from radio shows of old, backed up by harmonies by three cantankerous apple trees.

Brittany Hines’ portrayal of Dorothy is authentically youthful and fetching, yet strongly tempered with a visceral confidence beyond her years. She sings “Somewhere Over the Rainbow” not so much with sweet, wounded longing as with soaring, urgent determination. The performances by her traveling companions are equally credible. Joe Shipbaugh’s Scarecrow has an eminently loveable, lithe swagger; Jason A. Green brings real warmth and vulnerability to his Tin Man; and Stephen Ostertag is riveting as the Cowardly Lion, hilariously negotiating his character’s oscillating nerves.


With the intriguing performances by Lisa Belopotosky Knight as Glinda the Good Witch, along with that of Cheryl Henderson as The Wicked Witch of the West, you’ll surely get the feeling you’re not in the movie anymore. This Glinda is both refined and sassy, given to delicious moments of earthy savoir-faire, like spraying air freshener after the Wicked Witch’s departure from Munchkin Land (speaking of which, the 11 children playing Munchkins are adorable, most notably the two tikes representing The Lollipop Guild, with their hitch-up-your-pants boyish toughness). Additionally, the Wicked Witch in this production is something of a sensual Goth fashion queen with a superiority complex. Her unconvincing cackling is more bravado than outright evil. And of course it’s exposed bravado that reveals the supposedly fierce Wizard to be just a contrite, well- meaning man, genuinely played here by Don Jones.


Once again, conductor/keyboardist Steve Parsons and his 11-piece orchestra provide a lively, sharply arranged backdrop to the proceedings, and Joshua Erichsen has designed several very effective set tableau pieces. Kudos, too, to costume designers Susie Smith and Leslie DeStefano. But of all the stage machinations and “special effects” at work here (and that would include the clever depiction of a Kansas tornado via several wildly twirling dancers), none is more suitable to the task than the real dog ( not named in the program – oh the shame of it!) who plays Toto. Each time the docile little long- hair appeared on stage, on cue to a fault, whispery waves of appreciative oohs and aahs rose from the audience. He (or she) added an endearing bit of polish to this already shiny, magical evening.