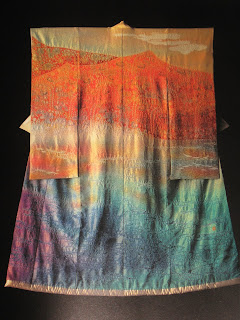 Symphonies of (De)Light
By Tom Wachunas

File this one under ‘reasons to be cheerful in Canton.’ As of this writing, my mind and heart are still unabashedly swooning over the April 25 performance of Puccini’s opera, “Madama Butterfly,” by the Canton Symphony Orchestra. I have never heard our astoundingly fine orchestra in better form. And in as much as the opera was a soaring and powerful end to the orchestra’s season, so too it provided an exclamation point to the historic “Kimono As Art” exhibit, featuring the Symphony of Light series of kimono by Itchiku Kubota, at the Canton Museum of Art.

Regarding that exhibit, I don’t mind telling you that one temporary consequence of seeing it was an overwhelming sense of futility in continuing my own work as an artist. For sheer compelling and excellent union of technique, form, and content, Kubota set an impossibly high bar, it seemed to me. I have sufficiently recovered from my depression just enough to be simply grateful that I live in a community that could offer such an exhibit as inspiring as this one was. Subsequently I am resolved to reach higher and keep practicing.

Back at the opera, I was particularly moved by Jacqueline Quirk in the key role of Cio Cio San (Butterfly) as she sang “Un bel di vedremo” (One Fine Day). Her deliriously beautiful voice transported me along into her joyous vision of anticipating the arrival of her beloved Pinkerton. Her life would surely be changed for the better. Interestingly enough, the moment echoed my own sense of anticipating both this opera, and of course the much-hyped Kimono exhibit.

While Butterfly’s hopes were tragically dashed, that is certainly not the case with the arrival of these two major artistic events in Canton. As a combined experience, I believe they herald significant and remarkable growth in Canton’s cultural profile. Our ship has come in, as it were, and we really are changed for the better. As an avowed “arts consumer,” the thought of waking up in the morning to Canton without its art museum and symphony orchestra strikes me as tantamount to discovering there is no food or oxygen.

My abiding wish is that more of Canton’s population would in turn continue to wake up to the refreshing, illuminating, and replenishing presence of these vital treasures in our midst, there for the asking, and always sweetening the very air we breathe.

Photo: Itchiku Kubota, “Rurikon / Emerald Moment of the Lake”, 1983, from the catalogue for “Kimono as Art” exhibition.
Posted by Tom Wachunas at 7:34 AM No comments: 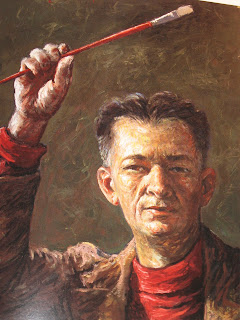 Savoring a Legacy
(get this book!)
By Tom Wachunas

“Clyde Singer’s America” is the catalogue that accompanied the major 2008 joint exhibition at the Canton Museum of Art and the Butler Institute of American Art, and it’s a finalist for a 2009 Ohioana Library Association Award. As exhibition catalogues go, this one is a real gem both for its subject, painter Clyde Singer (1908-1999), and the solid writing by M.J. Albacete (executive director of the Canton Museum of Art), with an additional essay by Nannette V. Maciejunes (executive director of the Columbus Museum of Art) and Christopher S. Duckworth (executive editor at the Columbus Museum of Art). The book’s 123 full-color reproductions are remarkably true to the original paintings, offering a comprehensive (and much needed) tribute to an artist who can fairly be called the under-heralded last master of the American Scene genre.

The Maciejunes-Duckworth essay expertly addresses Singer’s work in the historic context of the Ashcan School and the disciples who expanded its gritty urban realism by painting a broader Midwestern milieu, effectively capturing the American heartland in all its industrial and rural richness.

But it is Albacete’s sure, easy writing style that paints for us a warm and resonating biography of Singer – the man and the artist. Albacete delivers this compelling portrait with the same delightful vigor with which Singer himself lived and painted. The author’s commanding insights, informed by personal acquaintance and interviews with the artist, will leave you, I’m quite sure, with an abiding respect and admiration for a prolific (nearly 4,000 paintings) painter.

And if some art lovers may find it sad that Singer remained steadfast, even stubborn in eschewing the modernist trends that grew up all around him during his long, fruitful career, this book is a lovingly compiled record that surely points to a greater sadness: the passing of a vibrant era in both American painting and American living. 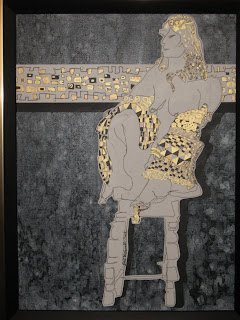 It has become clear to me that I needed to learn how to include photos with my writing. This one is a photo I took of "Contemplation" by Gail Wetherell -Sack, an acrylic work in the Watermedia Wizards show. I know that photos of visual art, particularly painting, no matter how technically and professionally advanced as photos, are inherently incapable of faithfully reproducing the authentic presence or the real substance of original painted works. I remember thinking, after seeing paintings for the first time in a museum by van Gogh and a Rembrandt, that the pictures in history books were woefully short of the mark in communicating the tactile intensity those painters had mastered. Some paintings are terribly resistant to photographic translation. Still, photos can, even at their worst, offer readers a general enough approximation of the real thing.
Posted by Tom Wachunas at 12:57 PM 1 comment:

Watermedia Wizards, part 2:
These Walls are Poppin’
By Tom Wachunas

The six artists’ 28 works that comprise this offering by the Watermedia Wizards (formerly known as Wizards of Watercolor) at Gallery 6000 are wildly varied in style and content. One thing the artists share, however, is the guidance they have received from fellow wizard Nancy Stewart Matin. She designs her instruction to inspire a daring spirit among her students in developing their personal esthetics. Of her approach, Matin has said, “The common thread is not any consistency of the artwork, but the consistency of commitment to experimentation – exploring any road less traveled. As you look about the show, you will see a whisper of the teacher, not a shout.”

That may be true to a large extent, but there’s still a whole lotta shoutin’ going on here. As in, to name only one interesting aspect of the show, electrifying colors rising from bold, tactile surfaces.

Matin’s “Chagall’s Teacup” and “Kimono in High Heels” are extremely fine evidence of her gift for composing engaging pictorial structures and laying in impossibly iridescent hues that make them seem illuminated from within.

Some of Judi Longacre’s work possesses a spirit of refreshing innocence akin to high-caliber illustrations you might encounter in children’s books. While her paintings can be comparatively innocuous in the presence of more muscular works in this show, they’re never vapid. And her “The Emperor’s Clothes,” with its electric greens and pinks, demonstrates a notable capacity for substantive abstraction.

Gail Wetherell-Sack is in fine form here with her sharp, sensitive eye for design and texture, creating works that are often whimsical without being wimpy. Her “Contemplation” is a marvelous, wiry seated nude rendered as a clear homage to Gustav Klimt.

Both Kristine Wyler and Lynn Weinstein deliver riveting compositions that straddle rich territory between ethereal representation of the recognizable and the purely abstract. Wyler’s dense “Through the Eye of the Needle” seems to convey a ghostly message with its wispy black markings suggesting calligraphy. And Weinstein’s “Navigating by the Stars” is a wonderfully poetic and spontaneous picture of nocturnal sailing.

For sheer painterly heft, visceral drawing, and remarkable versatility, there are the works by Kevin Maxwell. His “Red Figure at Window” transcends its small size with large, confident brushwork, as if each individual stroke is itself a compelling figure.

Collectively, these wizards of liquid magic have concocted an efficacious elixir for the eyes. And as viewers joining them on their less traveled roads, we can savor their satisfying potions. Drink up.
Posted by Tom Wachunas at 10:08 AM No comments:

Watermedia Wizards, part 1
(confessions of a curator)
By Tom Wachunas

Since becoming curator of Gallery 6000 last year, I have been guilty of the first cardinal sin of curating: hanging overcrowded shows. The current show, “Watermedia Wizards,” is my fourth, and no exception to my sinful ways. In my shaky defense, I plead unabashed enthusiasm for the artists I choose, the fact that Gallery 6000 is not a typical white-walled art gallery, and my failure to remember (despite my ardent resolve to do better next time around) the physical dimensions and limitations of the space. Or is it just outright denial?

Anyway, Gallery 6000, located in the Kent Stark Professional Education and Conference Center, is not really an art gallery at all. It’s a dining room. Granted, it’s an exquisitely appointed space fitted with a clever and unobtrusive system for exhibiting framed art with state-of-the-art track lighting, but a dining room all the same. As such it accommodates thousands of people annually, hailing from many locations, who attend all manner of seminars, corporate meetings, and conferences. I dare say that most of those people could not be categorized as serious art collectors, aficionados, or even casual gallery-goers. Still, popular response to the art in the dining room has been positive and very supportive. And several works, much to the delight of the artists, have been purchased.

Paintings in an exhibit need breathing room so they can “speak” not just to each other, but to the viewer as well. Stuffing a room with too many paintings stifles their individual impact and makes the space throb with too much competing visual information. I favor a harmonious “less-is-more” ensemble over visual cacophony, no matter how well cadenced. The 28 works gathered for this exhibit would very likely have been better served by hanging 6 or 7 fewer pieces. Fewer pieces, more peace.

Having said all that, I nonetheless firmly believe that these 28 works make a joyful noise indeed, and one worth the time it takes to perceive the many sweet melodies woven throughout. For my review of the show, look here for part 2 in the very near future. Meanwhile, come to the opening reception to view the work and meet the 6 artists on Monday, April 13 at 5:30p.m. Please RSVP to Becky DeHart at (330) 244 – 3518 or rdehart@kent.edu
Posted by Tom Wachunas at 1:13 PM 3 comments: