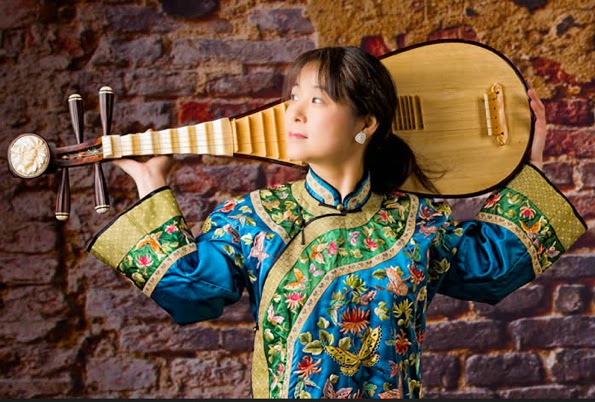 
Exiting Umstattd Hall after the January 24 “East Meets West” MasterWorks concert by the Canton Symphony Orchestra (CSO), I briefly noticed wide-eyed wonder on the face of a woman just ahead of me as she looked at her companion. I heard her gush, “Oh, those strings, those glorious strings! I had no idea!” And I thought to myself ah ha… another convert.
She was probably voicing her pleasure at the orchestra’s remarkable performance of the last work on the program, Brahms’ Symphony No. 4, memorably rendered here with sharply majestic and passionate grace. Still, her glowing assessment could just as well have applied to the entire evening, beginning with Grieg’s Holberg Suite, with its rollicking pizzicatos from basses and cellos in the first movement, the delicate lyricism of the fourth movement, and bright dance energy of the fifth movement. Those glorious strings…con brio indeed.
But it was the second of the three program selections that delivered a delightfully more expansive sense of string power to these proceedings. Pipa Concerto No. 2, composed in 2013 by Zhao Jiping, was commissioned by the Sydney Symphony Orchestra and co-commissioned by the CSO for world-renowned pipa soloist, Wu Man, who was the featured guest artist for this Ohio premiere of the work.
The single movement concerto is an adventurous pastiche that deftly weaves together modalities both traditionally Chinese and distinctly Western in flavor. Given Jiping’s distinguished history as a film score composer, it’s not surprising that this work would have a cinematic sensibility. At times it subtly evokes the spirit of John Williams’ most extravagant orchestrations, and the folkloric poeticisms of Aaron Copland. In all, a lyrical merging of power and gentleness.
The real thrust of the work, however, lies in the astonishingly dexterous hands of Wu Man. You’d think that a four-stringed wooden instrument as ancient and delicate as the pipa would be swallowed up by lavish orchestral sonority. But a well-placed microphone was all that was required for Wu Man’s artistry to be heard in perfect balance with the orchestra.
For all of her consummate technical facility in achieving a considerable array of timbres – from percussive and twangy to silken and liquid – Wu Man is as much a magician. She conjured textures and moods at will, joyous and pensive, here fanning the strings in lush cascades of staccato notes, there drawing out lilting melodic lines, or strumming furious, rhapsodic rhythms. She wasn’t just playing the instrument. She was making it sing, whether in soaring unison with the orchestra, or in dramatic counterpoint. Particularly savory were Wu Man’s various dialogues with other soloists in the orchestra, like gilt threads running through a plush tapestry – a shimmering frolic with the harp or violin, a haunting call and response with the cello.
Through it all, Wu Man’s demeanor suggested the serenity of a Buddah, occasionally flashing a coy or knowing smile. When she wasn’t clearly caught up in the sheer sweep of the music, she looked closely at Maestro Gerhardt Zimmermann, perhaps not so much for cues or prompts, but as a mutually poignant embrace of a lovely or potent moment. They, and the orchestra, were wholly on the same page in a sustained musical meditation.
Late in the work there is a cadenza that seemingly explodes with an intensity reminiscent of brash Russian Romanticism. Yet the work ends not with a bang, but an airy whisper, a harkening back to ancient quiet. The audience clamored for an encore. The magician responded generously with a traditional, electrifying Chinese piece that left us standing in slack-jawed amazement.


I include here a link to a video of Wu Man talking about the pipa: 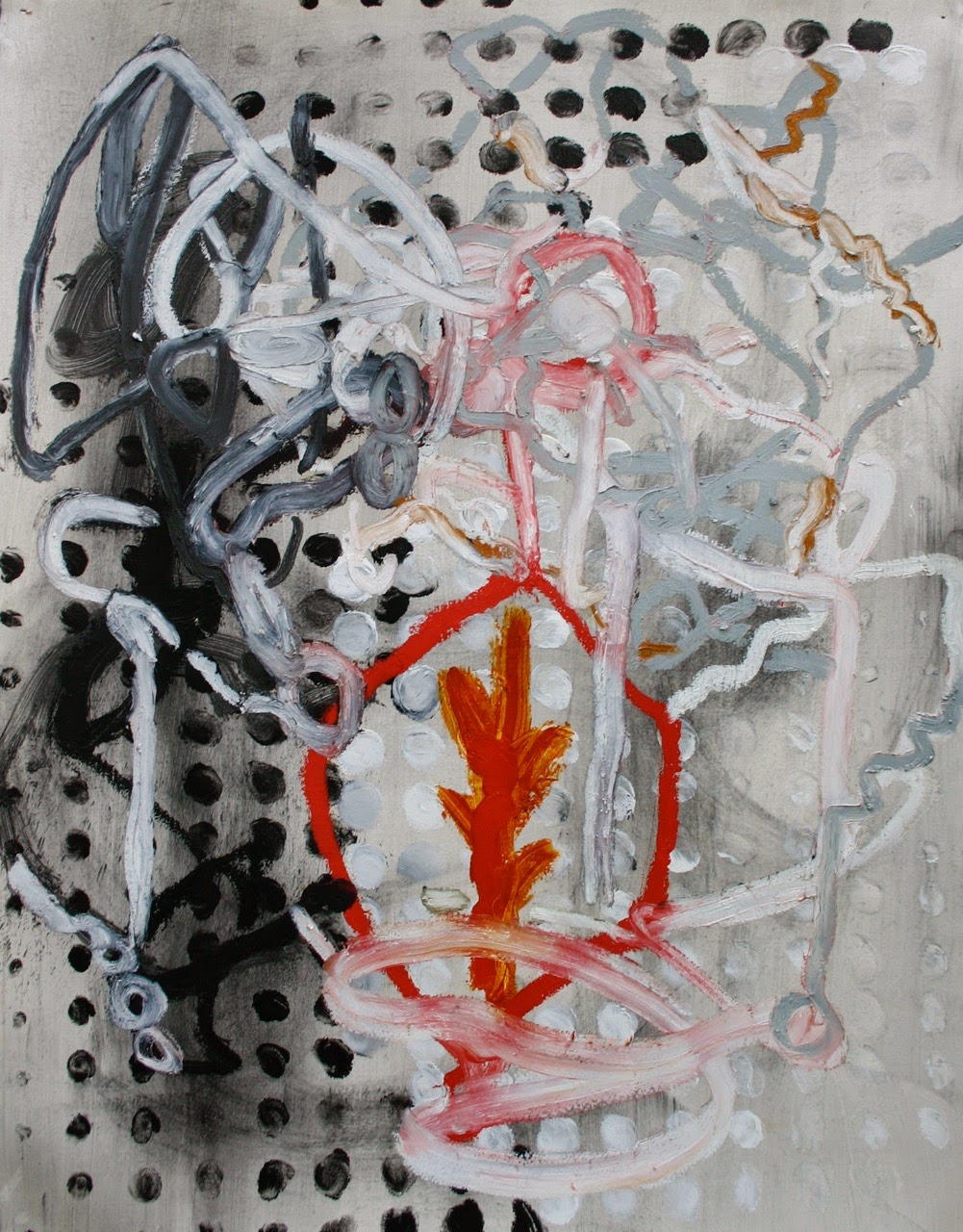 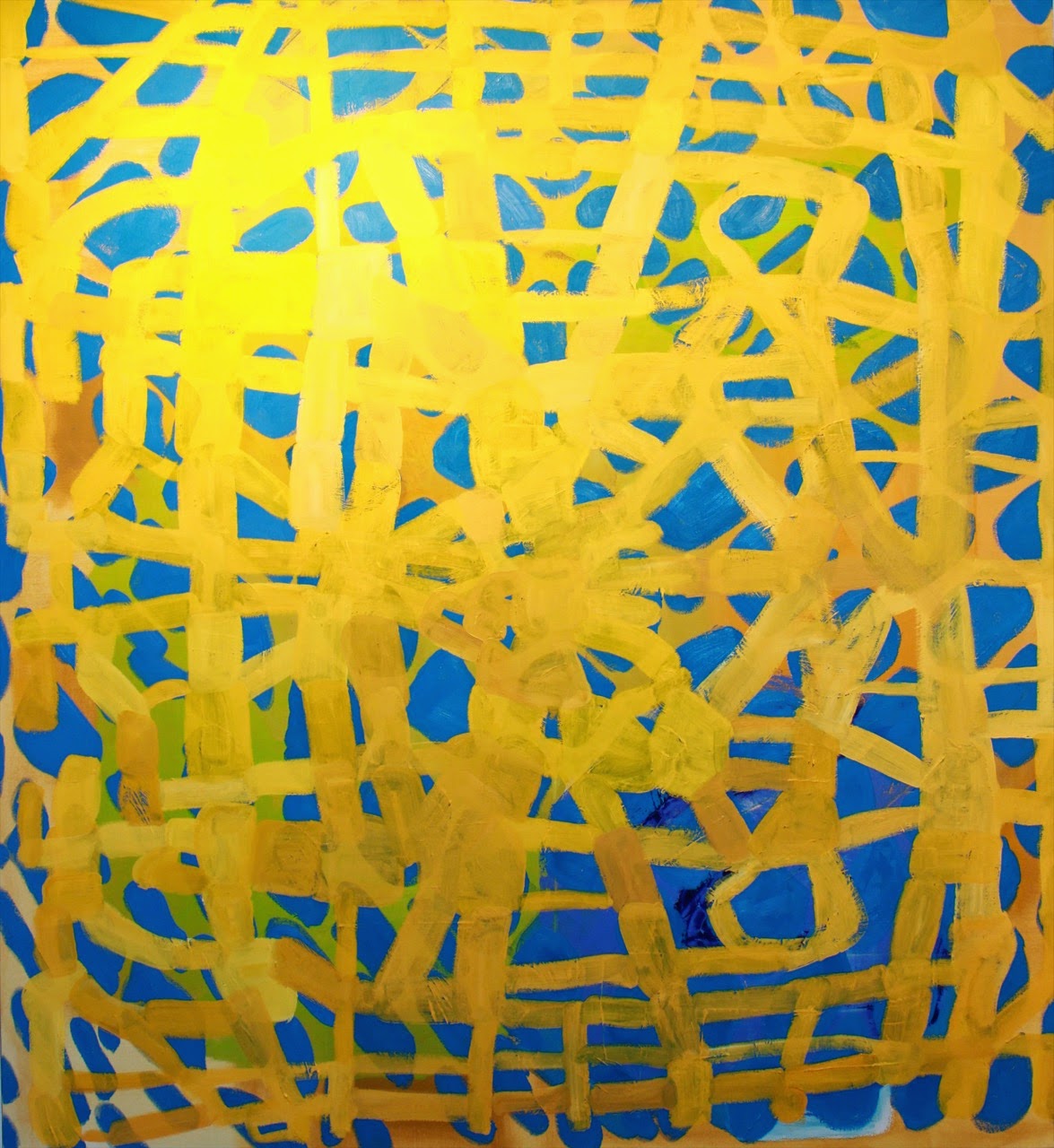 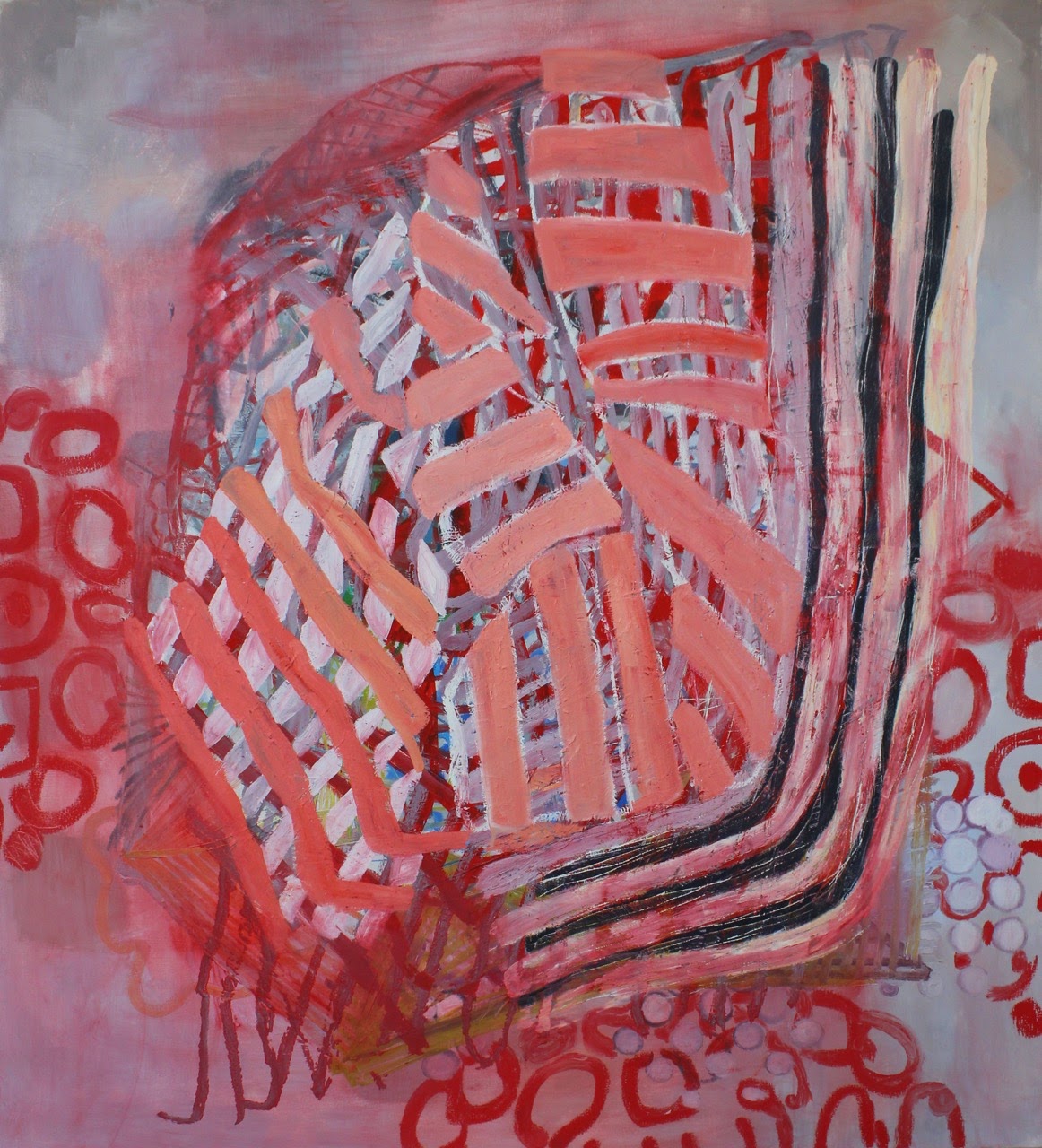 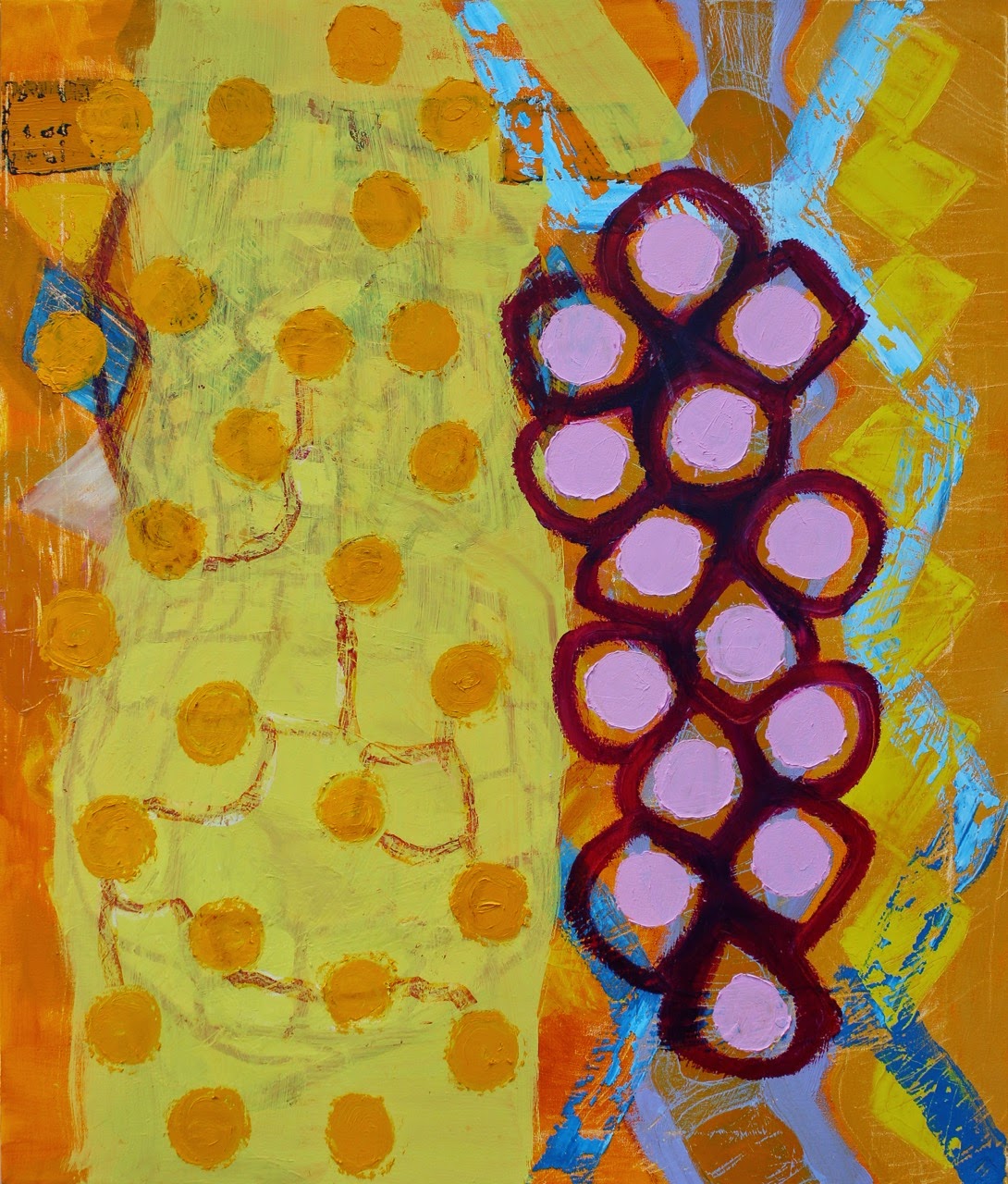 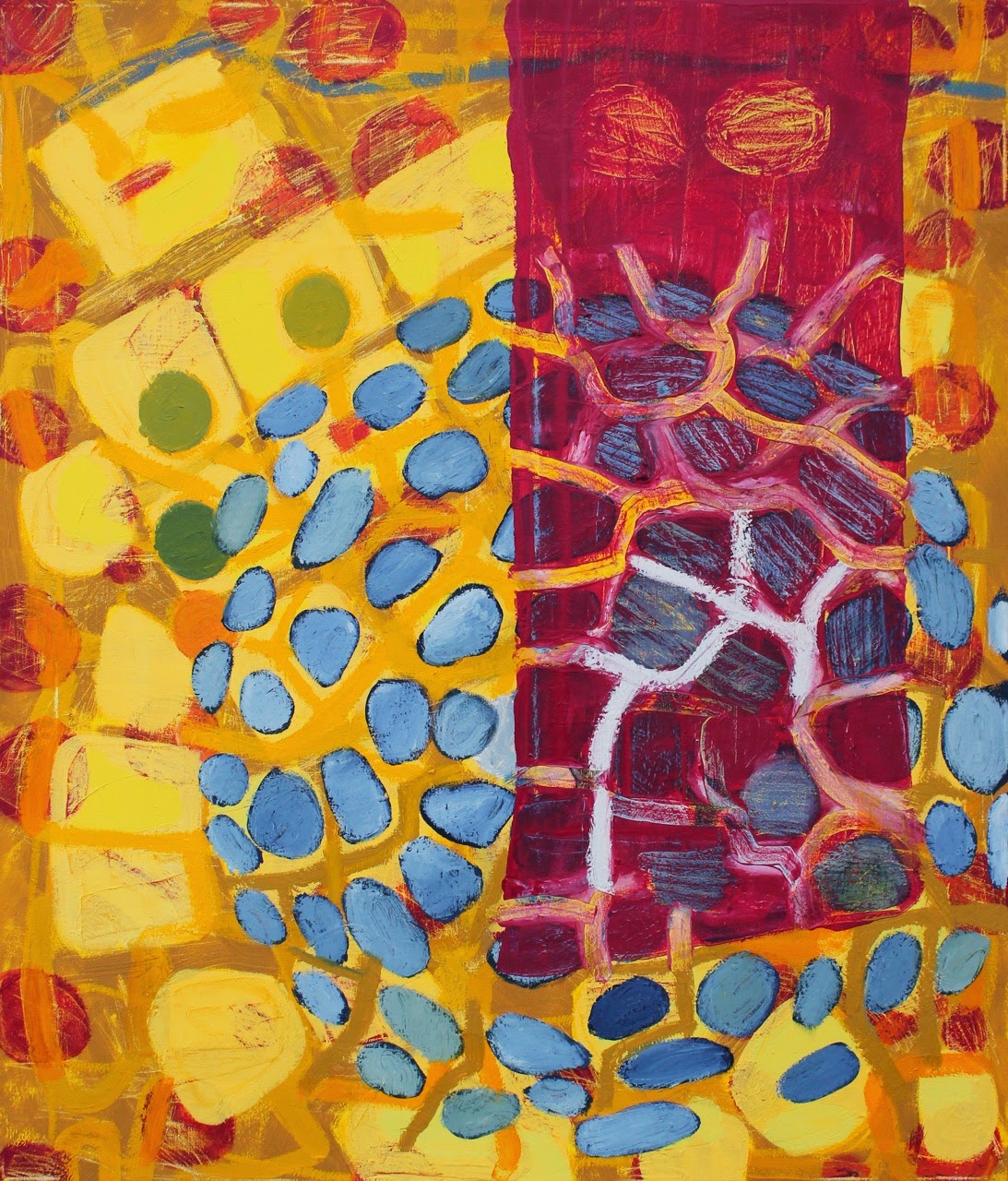 “… in both life and art, we register only those details that actually matter to us. What, then, are the roles of seeing relationships, accidents, morphologies, systems? Do we communicate what we see in metaphors? Allusions? Parables? Abstractions? Structures? What, indeed, are the processes of thinking and wondering that make science and the arts work?”  - Jack McWhorter

If you’ve not ventured into downtown Massillon in the last several months, don’t be too deceived by the name of the venue now hosting a solo exhibit by painter Jack McWhorter. While Gallery 121 isn’t exclusively an art gallery per se, from the outset the owners of this new upscale nightspot for food and cocktails were seriously committed to sating aesthetic appetites as well by providing a very long white wall, brightly lit and fitted to hang original art.


I think it useful if not necessary to introduce those of you not yet familiar with McWhorter’s work by directing you to a review I wrote in 2012:  http://artwach.blogspot.com/2010/02/molecularities-and-other-quarknesses.html


In many ways, what I said then is still apropos to this collection of 16 paintings, most of them from 2014. McWhorter continues to explore the confluence of art and science – a remarkable formalization of intuition. The push-and-pull dynamic between organic and geometric shapes and structures still constitutes his visual syntax. And the paintings continue to evoke cosmological and/or biological diagrams, models, or paradigms that scientists use to delineate the workings of esoteric physical phenomena and ephemeral forces in flux.
Yet these recent works are invested with a distinctly more intensified painterly panache than in the past. Even when a layer of paint gets scraped away or thinned, the overall character of the markmaking exudes a rigorous confidence. Coupled with a brighter, more elevated palette, many of these newer pieces pulse, seethe and crackle with what can only be called jubilant energy in the way they describe excited interactions of rhythm, pattern and motion – systems or processes simultaneously matured and nascent, static and morphing.
A particularly effective component of the exhibit are the small reproductions of line drawings with text notes mounted alongside the paintings. The drawings appear to be the germs of ideas for structuring the picture plane, i.e., establishing a pictorial architecture. The notes – streamings of single words and brief phrases – often read like a lyrical flow of consciousness, as in this example accompanying the painting titled Sudden Change : Living system/ rendering examples of time / choices symbolic / outside, inside/ impossible to draw / dwell within
Think of these combined elements – sketches and text - as conceptual guideposts or prompts for interpreting nuances of meaning in the paintings. And in the process, you might consider how it is indeed possible to articulate intriguing poetry with a paint brush. 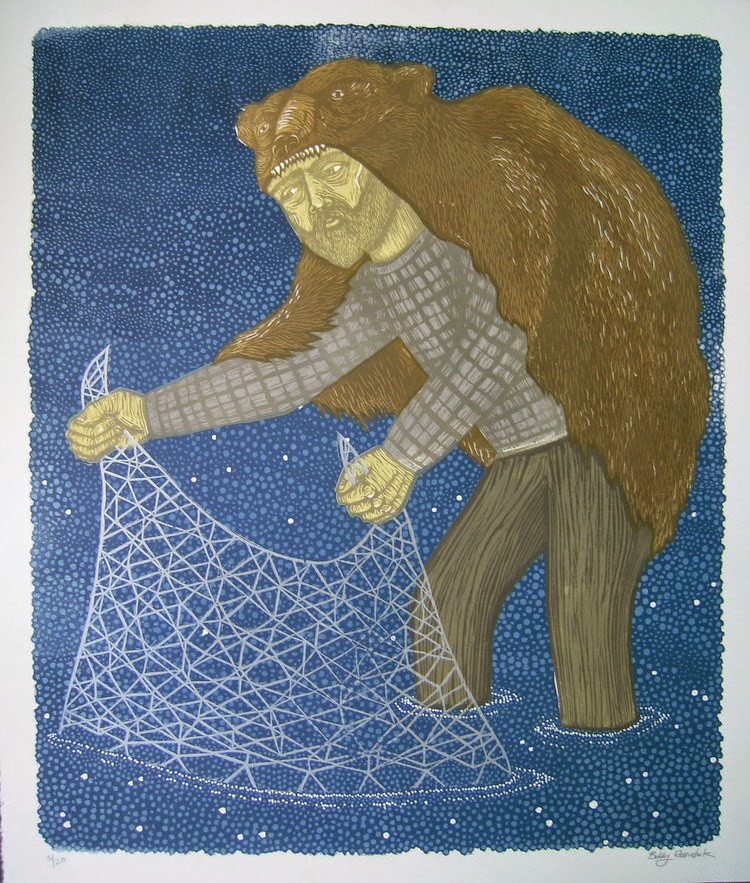 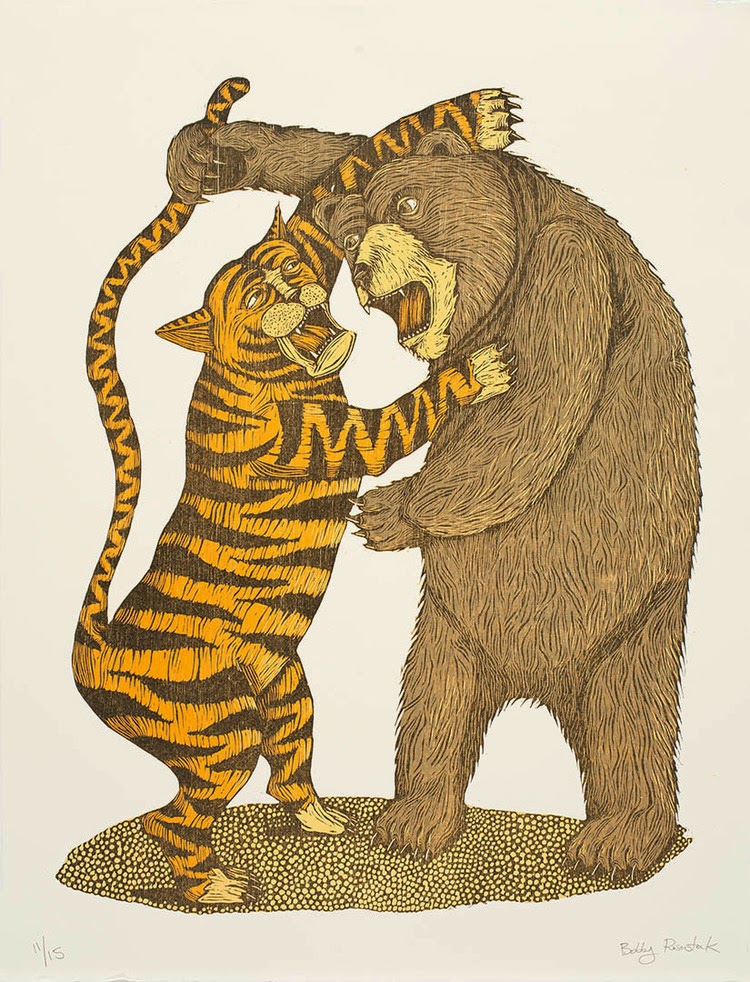 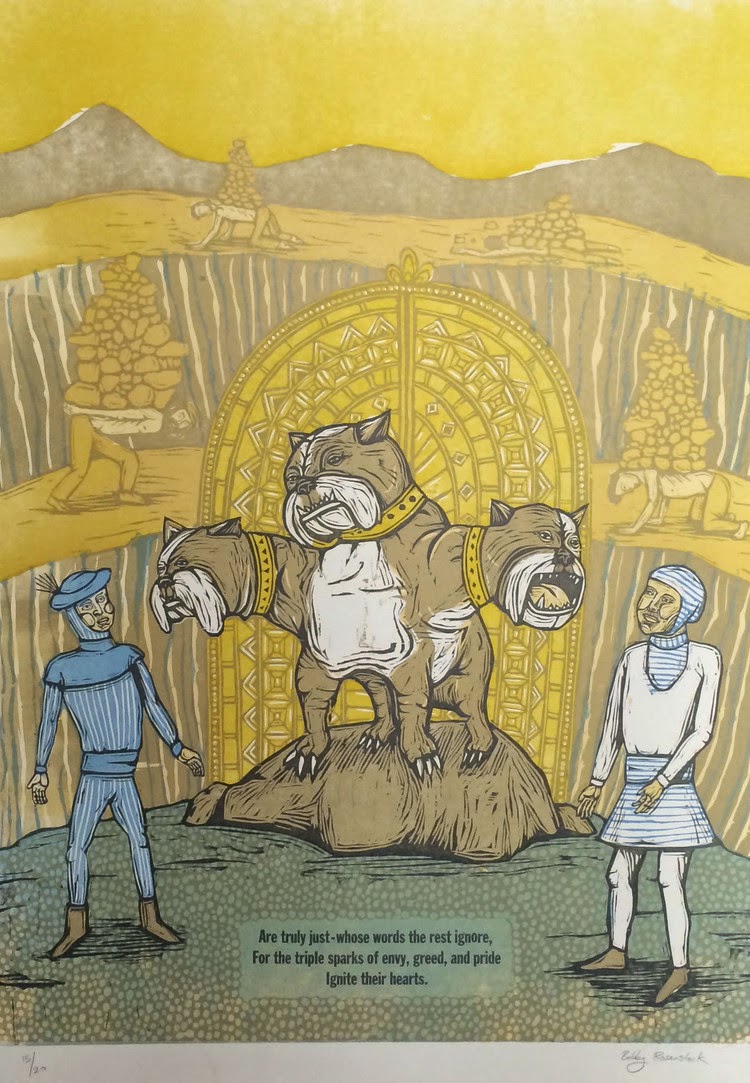 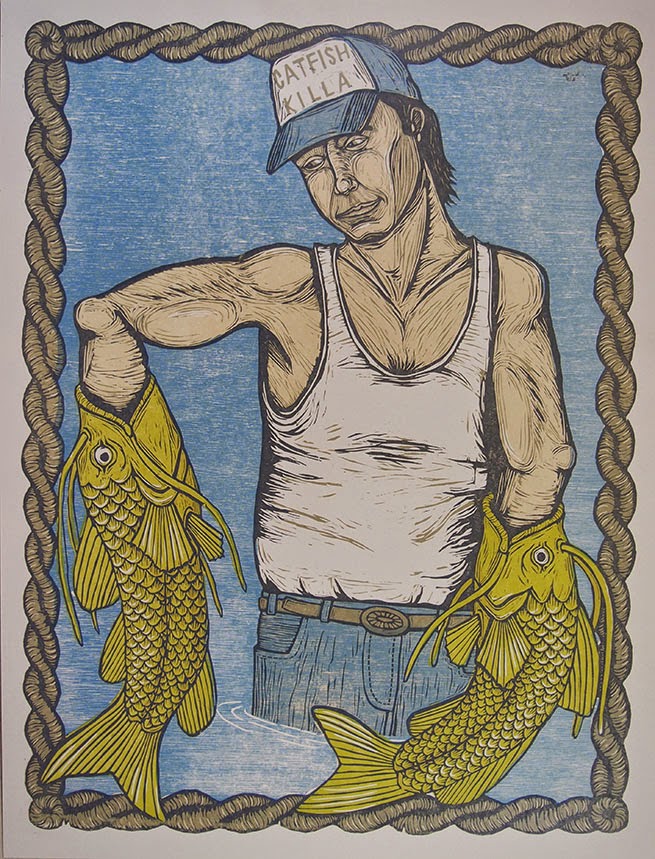 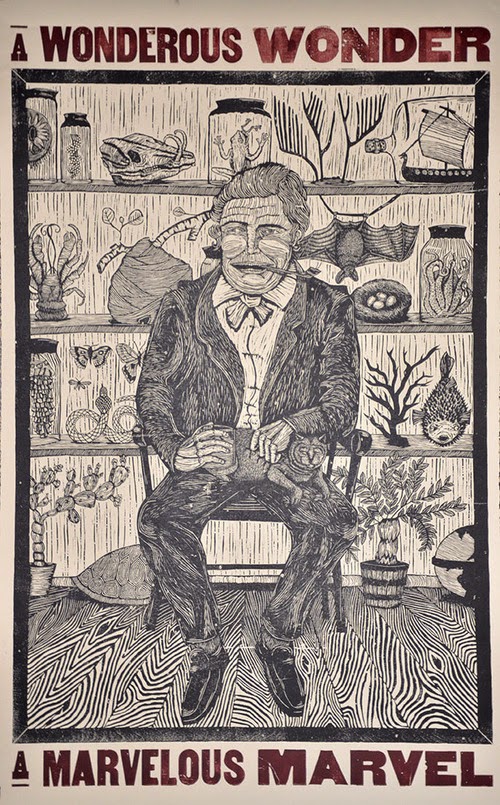 
Canton art lovers have seen works by printmaker Bobby Rosenstock featured in past group shows at Translations Art Gallery. This show, however, launches Translations as a roaming presenter, or “mobile, pop-up entity,” as curator Craig Joseph called it when he announced plans to vacate his Cleveland Avenue location. So this time around, Rosentock’s woodcut prints are mounted in a wholly alternative setting – Julz by Alan Rodriguez, a world class jewelry store in downtown Canton.
While this site does have its limitations as an exhibition space when compared to more traditional, airy galleries (though it has been a Canton arts district exhibitor of original wall art for about eight years), Rosenstock’s extraordinary stylizations seem nonetheless right at home in this context. They suggest to me a symbolic kinship with the powerful appeal of diamonds.
Cut, color, and clarity. Just as these elements are combined to craft exquisite diamonds, so too Rosenstock has mastered a centuries-old methodology to produce his images. They’re all the more savory when considering the meticulous, demanding nature of the relief printmaking process, so named for the uncarved surface of the woodblock – the surface in relief – that gets inked. The process is not a “right-reading” one. It requires backward thinking, so to speak - seeing in reverse. The artist must duplicate the original drawing/design by carving or cutting its mirror image into the woodblock. And usually, for every color we see in the finished print, a separate block was made.
Whether in music posters, whimsical portraits or fantastical scenes, Rosenstock’s aesthetic is imbued with the patina of other eras, recalling vintage book illustrations and sometimes, as in his renderings of Dante’s Inferno, medieval manuscript illuminations (sans gold leaf). He articulates his figures and textures with impeccable precision while maintaining a remarkable fluidity of line, and his deftly balanced palette of softened hues often evokes a spirit of enchantment.
Like elegantly sculpted diamonds, these images are gems of pictorial allure.


PHOTOS, from top: Unfathomable Tangle; Battle of the Beasts; Dante 3; Noodler; Wondrous Wonder
Posted by Tom Wachunas at 3:54 AM No comments: