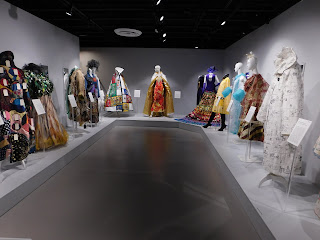 From Judi Krew’s exhibition statement: “…I embrace the mantra of reuse, repurpose, reconsider, and reimagine to guide the overall concept of each piece. What began nine years ago as a small scale sculptural dress serves to explore the idea of why we feel the need to hold onto “things”, this project has grown into an exploration rooted in problem solving…The original intent of Hoard Couture, to reduce an accumulation of things, has evolved over time into a series that sometimes looks back at our past and perhaps also forward to our future…”

Here’s an eye-popping parade of femiquinns bedecked in a bodacious array of unconventional materials. In this context, we can rightly regard Judi Krew’s works as not just “fashion design”, but also as remarkable mixed-media sculptures.

On a purely formal level, she consistently achieves an elegant balance of volume and mass animated with electrifying patterns and textures, and all harmonized by an intoxicating color sensibility.

On a conceptual plane, I think there’s a kind of probity to many of these pieces that brings new meaning to the idiomatic trope of wearing one’s heart on one’s sleeve. In all of their astonishing intricacy of constructed details, these exquisitely crafted assemblages are more than merely decorative. They’re declarative. I’m confident that you would be well served to read the text placards accompanying each piece, wherein Krew speaks about the history of her materials and their ideological symbolism, as well as processing and resolving the technical challenges in making a given piece actually wearable.

Dress for Sex-cess: Truth or Dare is a stark white denim dress covered with handwritten names or victim numbers of 358 women who filed sexual harassment claims against Bill Cosby, Harvey Weinstein, Roy Moore, Bill Clinton, and Dr. Larry Nasser. It’s a literally gripping document and, as Krew tells us, “…a walking, wearable record of history to spark conversation and awareness.”

What color is your COVID is a cape comprised of neckties with varying configurations of circles, spots and dots, and attached toetags with numbers written on them. Krew counted every single one of those circles, spots and dots, totaling 44,935. But that number is just a starting point for grasping the symbolism of this ingenious work. Once again, here’s where reading the placard can be especially vital in appreciating the meticulous way Krew breaks down that tally further into a sort of algorithm signifying the staggering and still growing number of COVID victims in the U.S.

We Burned is a beautiful and haunting remembrance of the deadly 2018 California Wildfire season. That billowy bodice is a cluster of 2,000 hand-cut “leaves”, each one burned or charred, and made from such things as greeting cards, photos, wrappers and cartons – stuff easily lost to fire. Krew adds this poetic note: “…Sometimes a leaf will fall off and float away, another lost soul returning to nature.”

In all, the excellent physical installation of this collection exudes an inspiring theatricality. You might easily imagine being backstage at a fashion show, or standing in the wings while gazing at the line of “models” poised to strut and swirl their fantastic finery onto the runway. A palpable sense of imminence. Suddenly those static sculptures seem positioned to become kinetic entities in space - a thrilling and provocative work of performance art.

ALSO, MassMu will post a podcast interview with Judi Krew on Tuesday, September 21, at noon.

Posted by Tom Wachunas at 12:19 PM No comments:

On a Parting Note

On a Parting Note

“THE LAST HURRAH features 65 artists reflecting on last things, final occurrences, ends of stuff, and how and when events come to a close. It's the last exhibit I'll be curating under the Translations banner, and a celebration of all the wonderful artists who've collaborated under the brand in the past 11 years.”  - Craig Joseph

Of all the art spaces that have come and gone from downtown Canton’s “arts district,” none was for me a more exciting art gallery in the truest sense than Translations (located at 331 Cleveland Avenue NW). Craig Joseph’s curatorial acuity consistently provided us with shows of remarkable aesthetic and conceptual depth.

It’s certainly no surprise, then, that this Last Hurrah is any less inspired and inspiring. The show is exceptionally rich in its diversity of media, materials and styles, including several excellent written works presented in enlarged text on tall, wall-mounted banners of white paper. The emotional, psychological, and spiritual arc of this entire exhibit is broad, often infused with poignant reflections on not just endings, but the prospect of hope in beginnings as well. So come ready to really read, literally (hey, this is a library after all) and figuratively.

On one level, I’ve been thinking about the end of the Translations era as a somewhat bitter pill to swallow. Speaking of pills, there’s Kevin Anderson’s stark Citalopram, 30 Mg. Made from molded (carved?) foam, it’s a larger-than-life representation of an antidepressant medication. To everything there is a season if not a cure, eh? That specified 30 Mg dosage seems to deepen the piece’s symbolism. In the world of print media, writers’ often ended their typed articles or press releases with – 30 - . It’s a codified designation, and I’m not sure if it’s still a common practice in journalism. In any case, it means “finished” or “end of story.”

On a more important level, I’m thankful and honored to be in the company of all the of very fine artists who made work for this show – a  communal, heartfelt farewell to an important exhibition platform. Read the statement that David McDowell included with his mixed media work, The End and the Beginning, and see how he expresses his own gratitude. Inspired by a memory of an incident from 20 years ago, it’s a mesmerizing image of a glowing tree, on fire after being struck (and killed) by lightning, and actually flickering here in blue and green LED lights. I echo McDowell’s concluding words: “…May we let this Last Hurrah prompt us not to mourn, but to step up. Some clichés are true: Every ending is a new beginning. Thank you, Craig.”

Posted by Tom Wachunas at 1:08 PM No comments:

A Compelling Illumination of 'Different"

A Compelling Illumination of ‘Different’ 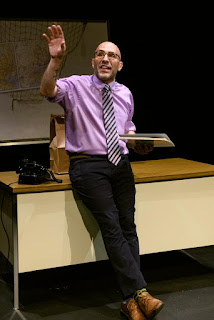 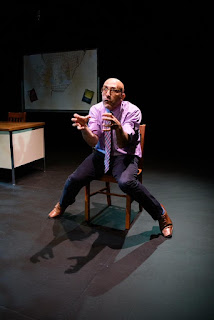 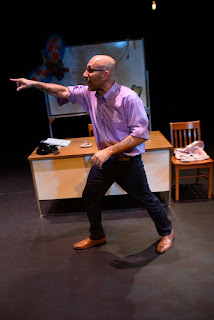 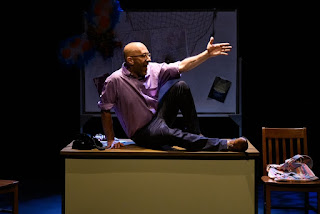 ‘This above all: to thine own self be true, And it must follow, as the night the day, Thou canst not then be false to any man.’ – from Shakespeare’s Hamlet, Act 1, scene 3

“A much-needed, beautiful testament to the power of the human spirit and the power of being oneself.”  - Craig Joseph

This play is a marvelous one-man show and an otherwise brilliant tour de force of storytelling. Written by James Lecesne and here deftly directed by Abraham M. Adams, it stars Craig Joseph, who plays every character – eight in all – beginning with Chuck DeSantis, a frayed-at-the edges police detective with a fondness for quoting Shakespeare, as in, “The evil that men do lives after them...” We might quickly think we’re in for a rough ride when in his opening lines, he glibly declares, “… The dark side is my beat.”

For the next 70 minutes, we watch and listen as he re-lives a case from 10 years ago, probing what happened to Leonard Pelkey, a fourteen-year-old boy who had gone missing in his Jersey Shore small town. The detective interviewed a bevy of local citizens. They included Leonard’s guardian, feisty “aunt” Ellen, who owned a local beauty salon and who refused to call the boy “gay,” preferring instead, “just different”; Ellen’s jittery daughter, Phoebe; chain-smoking Marion, who tearfully recalled at one point how Leonard  “…saw us not the way we were, but how we hoped to be…”; Buddy, the British director of a local drama and dance school who treasured Leonard’s uncanny theatrical talents; Otto, the German immigrant who owned a clock repair shop where Leonard took refuge from the bullies who relentlessly attacked him; and Gloria, the church-going, bespectacled widow of a mobster, and who spotted one of Leonard’s signature  rainbow platform sneakers floating like an omen in the lake outside her home. Good news, this Leonard’s shoe, thought the detective. And bad news. Leonard wasn’t attached.

Yes, there’s evil and darkness and tragedy here. But that’s not the end of this ride. Evidenced by all the character’s very animated testimonies, most of the townsfolk judged Leonard’s differentness to be somehow intolerable. “Too much,” they said. Yet in honestly recalling what he did and said, and how he did it and said it, hardened hearts were softened. It’s a bittersweet hindsight, to be sure. Only when Leonard was gone from their midst did they see him, in all his objectionable “flamboyance” and quirkiness, as a bringer of light, indeed love. His undaunted trueness to himself gave them pause to examine their own lives in that same light.

All of these characters come to credible life thanks to Craig Joseph’s remarkable performance acumen. From the timbre of his various accents (New Joisey, Britain, Germany) to the detailed nuances of body language, his expressivity is riveting, at once fiery, poignant and not without a generous dose of edgy humor. He turns the playwright’s words into specific, tangible people with attitudes - funny, happy, frightened, angry, mournful -  switching from one to the next with astonishing speed and precision. And all of it is beautifully enhanced by lighting and sound elements designed by Micah Harvey and Megan Slabach respectively.

This is beyond fine acting. It’s absolute magic.

Posted by Tom Wachunas at 5:24 AM No comments: