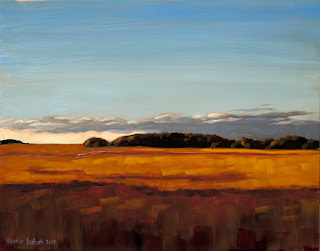 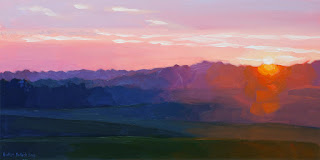 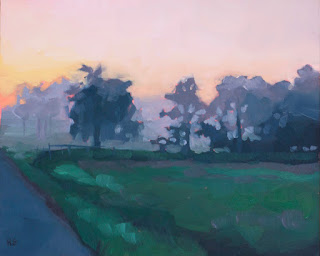 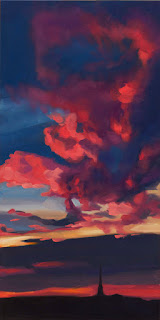 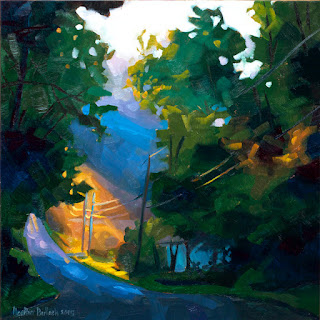 “Now I really feel the landscape, I can be bold and include every tone of blue and pink: it's enchanting, it's delicious."  -Claude Monet
“Painting from nature is not copying the object, it is realizing one’s sensations.”  -Paul Cezanne


Here’s an excerpt from a review I posted back on February 11, 2014, about Heather Bullach’s portrait paintings: “…And to her method she brings a necessarily keen, sensitive eye for nuances of light, color and perspective, along with a remarkably adroit physical touch that gives a silken presence to her surfaces.”
That assessment remains largely apropos to Heather Bullach’s current body of work, but it also merits appending some other observations. Whereas her earlier surfaces effectively honed the “silken presence” of her paint handling, giving her images a tidy realism, her new works represent a transition toward purer painting, which is to say letting the paint be paint. In so doing, they announce an invigorated and considerably less timid presence of the artist’s brush. While this sort of manual expressivity is subtly evident in a few of Bullach’s recent portraits, it’s decidedly more apparent in her newfound embrace of the landscape genre.
Her intimately-scaled oil paintings are seductive hybrids of the literal (representational) and the essential (abstract). Throughout most of the compositions, colors and shapes are treated as harmoniously balanced planes, rendered with a quietly gestural energy (as opposed to weighty impasto). Sometimes the softly blended brushstrokes appear a bit formulaic or precious in the regularity of their application, such as in the gold and brown fields depicted in September. But generally, they suggest actual textures while not belaboring meticulous illusionism. Bullach is beginning to use the materiality of paint not toward a strictly mimetic end so much as a sensational one in the true sense of the word.
Certainly the most striking presence here is the ephemeral yet tangible character of light itself. Reflected light, as in the jewel-like shimmering of Indian Summer. Refracted and dispersed light, as in the eerily serene Fog. Or the spectacular potency of dramatic light, as in Charelston Steeple.
Of course, it’s via the transformations of color that we best apprehend light in its most palpable manifestations. The subtle dynamics of variable color intensity and saturation work remarkably well together in Bullach’s landscapes, imbuing them with - to borrow another reference from my 2014 review - not just credible likenesses, but enchanted lifenesses.
And if colors can be said to impart real tastes, Bullach’s are indeed delicious. Monet would approve. 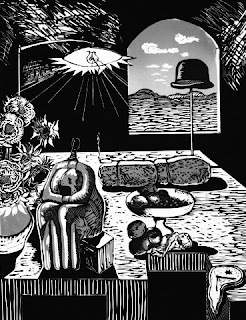 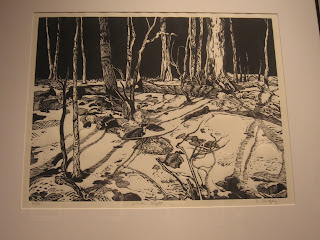 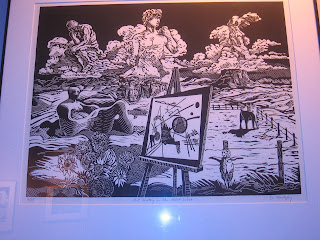 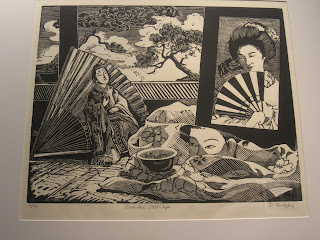 "If you can't do it in black and white, all the color in the world is not going to help." - Robert Malone, Southern Illinois U., Edwardsville


“Sane judgment abhors nothing so much as a picture perpetrated with no technical knowledge, although with plenty of care and diligence.”  - Albrecht Dürer


I remember well an episode from the fifth grade when I first encountered a picture of Albrecht Dürer’s woodcut print (c. 1497-8), Four Horsemen of the Apocalypse, in an encyclopedia. The crisp precision and abundance of detailed linearities, and the dramatic capturing of light – all in black and white - were completely mesmerizing. I want to learn to draw just like that, I thought to myself. Subsequent learning about the demanding process of  producing such an image, called “relief” printmaking, made Dürer’s artistry all the more amazing to me.
A brief primer is in order. The relief method of printmaking requires cutting or carving into a block of suitable material such as wood (“woodcuts”) or linoleum (“linocuts”) so as to produce a raised image (hence, an image “in relief”) to which the artist applies ink and transfers it to paper via pressure from rubbing by hand or rolling it through a mechanical press.
While skilled drawing in the traditional sense produces instantaneous results by directly applying a drawing implement to paper, much of my fascination with relief printmaking lies in appreciating its meticulous procedure of sculpting the matrix, i.e., the surface of the block, to recapitulate the artist’s original drawing. Additionally, relief prints are not “right-reading” duplications of the original drawing, but rather mirror images. The artist must necessarily think in reverse, as it were.
Though the images in this remarkably arresting collection of black and white linocuts by Dennis Revitzky aren’t as densely packed with tight clusters of individual lines as, say, the Dürer masterwork mentioned above, they are no less enthralling in their diverse pictorial textures. Their very high contrasts of light and dark values cause them to practically pop off the wall with a sculptural boldness (even when viewed from a substantial distance) while simultaneously drawing us to the finer points of their interiors. Reading them abstractly, the whites function not as static backgrounds or inactive negative spaces, but as integral units of illumination in an organic whole – white light as a discrete, positive form sublimely balanced with heavy blacks and “grey areas” of delineated patterns.
Mr. Revitzky is multi-lingual, in a manner of speaking. His particular brand of naturalism (sometimes imbued with surrealist sensibilities) allows him to be equally eloquent in landscape, still-life and figural genres. And playful, as evidenced by his witty appropriation of significant works from art history. With pieces such as Art History in the Great West and The Collection, for example, try making a game of identifying borrowings from ancient Greece, Michelangelo, Van Gogh, Picasso, Magritte, or Dali, among others.
Revitzky’s fluid drawing/cutting style has all the confidence and elegance of finely-wrought calligraphy. From that perspective alone, you might consider the experience of looking at his prints a delightful exercise in write-reading.


PHOTOS, from top: The Collection; Winter Night; Art History In The Great West; Oriental Still-Life
Posted by Tom Wachunas at 2:52 AM No comments: 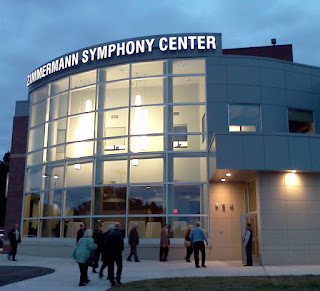 Peculiar Heroics from the Canton Symphony

The theme of the Canton Symphony Orchestra’s season-opening concert on October 3 at Umstattd Hall was “Heroes Among Us.” It is an ambitious theme, to be sure, and one that understandably sets up an expectation of hearing truly iconic music exemplifying lofty ideals such as bravery, courage, or sacrifice. And yet I felt half the program content on this occasion to be somewhat underwhelming in that regard, if not downright peculiar.
The evening’s first selection was Joan Tower’s Fanfare For The Uncommon Woman #1(1986).  The piece uses the same instrumentation as Aaron Copland’s unforgettable Fanfare for the Common Man, and even begins with essentially the same solemn, measured strokes from the percussion. But after that, Tower’s scoring for the brass instruments is considerably more busy and textured than the majestic or “heroic” simplicity of the Copland work. It’s probably best to think of Tower’s piece not so much as a cheeky or feminist retort to Copland (as some have considered it in the past), but rather as a respectful and warm embrace of women across history who, in Tower’s words, “…take risks and are adventurous.”
Further pursuing the notion of adventure as it relates to women - though this time of a fantastical sort - the second work on the program was the stormy Ride of the Valkyries, from Wagner’s opera, Die Walküre. In Norse mythology, the Valkyries were valiant warrior maidens on horseback, given the power to determine a battle’s outcome and reward fallen heroes by delivering them to Valhalla to reside with the gods. Not surprisingly, the orchestra, like the Valkyries themselves, boldly soared to the occasion, effectively conjuring all the music’s haunting imagery of ominous battle cries echoing through windswept cliffs.
Continuing with Wagner’s ‘Ring Cycle’ as source material, the proceedings took a decidedly quirky and abstract turn with Christopher Rouse’s Der Gerettete Alberich (roughly translated as “Alberich Saved”), composed in 1997. The work is a concerto-like fantasy for solo percussionist and orchestra that very loosely explores Wagner’s melodic themes connected to the character of the maleficent dwarf, Alberich.
“As Alberich’s whereabouts are unknown at the end of the Ring,” Rouse tells us in his program notes, “it occurred to me that it might be engaging to return him to the stage, so to speak, so that he might wreak further havoc…” And that’s precisely what guest artist/percussionist Colin Curie accomplished with his dizzying array of instruments, including a variety of drums, wood blocks, and marimba.
Also in the array were two guiros – hollow gourds or wooden cylinders with notches cut into the sides to produce a raspy noise when rubbed with a stick. In this context, that sound was a particularly appropriate irritant, representing Alberich’s mischievous, taunting nature. Curie’s manual dexterity, tempo management and rhythm sensibilities were marvelous to behold as he produced an astonishing range of tonalities harmoniously balanced with the orchestra. At times the music erupted into very loud, wildly textured cacophonies of rhythms exchanged with the orchestra, with one passage suggesting that Alberich had become a 1970s rock-and-roll drummer. So yes, the music was cleverly structured and loaded with aural witticisms, yet ironically light in poetic or emotional thrust.
This was not so much the case with the final work of the evening, Prokofiev’s powerful Symphony No. 5. For all of its rhythmic complexities, tempo changes and occasional dissonances that tend to interrupt its more inspired and emotive passages, it is nonetheless a compelling enough homage to fortitude and joyous valor in times of war.
In the end, the program seemed to dangle a question: where do our most meaningful ideas of heroes reside? In the fables of fictional gods, or in the inspiring accomplishments of real humans? Thematic shortcomings notwithstanding, one other expectation of the evening was certainly well met, and that would be the breathtaking sonority of the Canton Symphony Orchestra under the baton of Maestro Gerhardt Zimmermann. This remarkable ensemble’s consummate artistry is itself…heroic.
Posted by Tom Wachunas at 12:53 PM No comments: