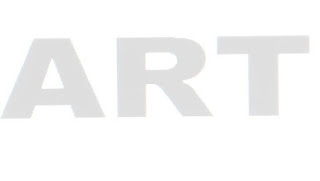 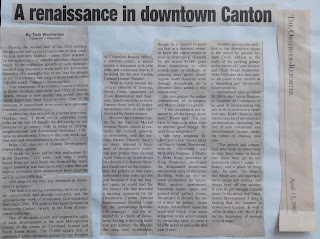 It is with heavy heart that ArtsinStark announces the closure of the gallery of Avenue Arts Marketplace. For 16 years Second April Galerie and then Avenue Arts were the heart of the Canton Arts District. Through the tireless efforts of countless artists who have shown their work and been in residence, the space at 324 Cleveland was a living arts center. The ArtsinStark staff has worked very hard to keep the flame burning, but with reduced sales and the latest wave of closures due to Covid19, the space is no longer financially viable.

With the closure of the gallery space, the theatre will live on housed at the Education Center at the Cultural Center for the Arts opening tentatively with “Spring Awakening” in September. While we will miss our visual artists in residence at the 324 Cleveland space, we look forward to the new opportunity to grow the theatre program and the continued excellence of Avenue Arts Theatre.

The community will get one last chance to visit and shop with us on Friday, June 5 from 4-9pm during Canton First Friday. You can also shop online now through June 5 on the website at  www.avenuearts.org

Between 2006 and 2008, I reported on the arts in Stark County for a short-lived weekly newspaper called The Observer-Reporter, published out of Jackson Township. On April 12, 2007, the paper published my article titled A renaissance in downtown Canton. It was an enthusiastic look at the early stages of what came to be called The Canton Arts District.

The article ended with the words of Robb Hankins, president and CEO of ArtsinStark: “The people and companies who want to move here or stay here want to know that when they go to our downtown, there’s some vibrancy and a place to hang out. So there’s this whole arts and entertainment image and feeling, and things feed off one another if you’ve got enough critical mass. In my mind, that’s economic development. I have a feeling that this summer in downtown Canton, it won’t all be in place yet, but it will be the beginning of enough critical mass.”

As summer 2020 approaches, I’m thinking that what comes around…goes away. Critical mass diminished. Heavy heart indeed, thanks for the memories.

Posted by Tom Wachunas at 1:23 PM No comments: 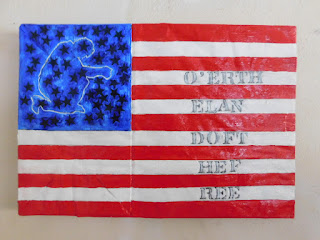 Recalling my small painting, The Untied State of America, from October, 2017. At that time, I wrote very briefly about the work here, referring to it not as “political art,” but simply as a prayer. I asked then: What do we stand for, when, and in whose presence?

The question still burns, as it always will - a torch that won’t be extinguished. So on this day, in circumstances here and now most vexing, I offer you just a few additional, though urgent thoughts. United, we stand. In praise and loving remembrance, in gratitude and grace. Untied, we kneel in the mind of God, and in the eternal, infinite light of his promise to those who love him.

“…For I know the plans I have for you,” declares the Lord, “plans to prosper you and not to harm you, plans to give you hope and a future. Then you will call upon me and come and pray to me, and I will listen to you. You will seek me and find me when you seek me with all your heart. I will be found by you,”… (Jeremiah 29:11-14)

Posted by Tom Wachunas at 7:48 AM No comments: 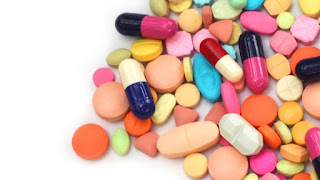 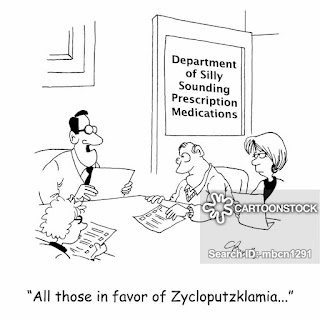 “…Drug names often contain subtle linguistic cues that are the product of a high-stakes creative exercise that marries the magic of marketing with consumer psychology and scientific testing….”
- Amy Nordrum, from her article in International Business Times (6/24/15)

Here’s a link to the article:

2: a word or morpheme whose form and meaning are derived from a blending of two or more distinct forms (such as smog from smoke and fog)

One of the many reasons offered by big pharmaceutical companies for the staggering retail prices of prescription medications has to do with recouping (or anticipating) the high cost of continuing research, development, and of course, marketing. Somebody has to pay for all those riveting, state-of-the-art television commercials about drugs with funny names, usually accompanied by innocuous music, and gently narrated with cautionary litanies of side effects, including a reminder to tell your doctor about any other medications you’re currently taking (just in case he or she has forgotten), even though you (and maybe your doctor?) can’t remember how to pronounce, much less spell them.

Who comes up with this stuff anyway? Professionals. And we pill-poppers contribute to their paychecks. If you’re of a mind to click on the link above, you’ll read that yes, there is supposedly a scientific protocol, an officially sanctioned rationale and procedure, for naming medications. It’s all a bit complicated, certainly.

A fantasy. Let’s say I’m interviewing for a job in one of those imagined departments at, say, Johnson & Johnson, or Pfizer. To test my biomedical acumen, I’ve been asked to name some of their newest medicines. Here are some of my  answers:

Guys, try AKTLYKAMAN for an energy supplement; for curing acne, ZAPAZIT; for eliminating those pesky aromas after an intestinal explosion, NEUTRAPHART; for obesity, LOOZALDAFLAB; for chronic clumsiness, ANTIKLUTZINOL; for sleep apnea, DOZALNITE; for foot fungus, TOZARCLENE. And so forth.

“Thanks, but much too silly,” said the interviewer as he showed me the door, adding, “We’re very serious about our work here.” In my defense, I explained to him that the test had triggered another of my many HWS episodes – Hyperactive Wordplay Syndrome. I’m actually quite fond of the condition, though, and relieved to know there’s no pill for it.

Posted by Tom Wachunas at 2:36 PM No comments:

“All photographs are memento mori. To take a photograph is to participate in another person’s (or thing’s) mortality, vulnerability, mutability. Precisely by slicing out this moment and freezing it, all photographs testify to time’s relentless melt.” ― Susan Sontag

“I can look at a fine art photograph and sometimes I can hear music.” – Ansel Adams

- all the images here are digital infrared photographs -  © Stephen Paternite

More Spring gleaning, more virtual curating, in the spirit of my post here from May 7. During my Facebook browsing excursions of late, I’ve been admiring a significant number of black-and-white digital photographs by Stephen Paternite. He’s a prolific Akron artist who has been working in infrared photography since 1978. As an evolved photography technique, digital infrared is empowered with a particular sensitivity to light radiations beyond the visible color spectrum. A marvelous tool for seeing the otherwise unseeable.

Amid the incessant showers of photographs saturating social media, the ubiquity of bright, clamorous color can sometimes feel numbing. In that context, it’s only at first glance that Paternites’s digital infrared black-and-white images might seem like curious incongruities – throwbacks to another era. Yet they’re actually a calming respite from the deafening polychromatic noise of the Internet.

Look closely. Not at them so much as inside them. You might even hear them - veritable symphonies of dramatic tonal contrasts and exquisite textures. These impeccably composed pictures are spectral landscapes, or dreamscapes, if you will, emanating an immersive, crystalline light that transforms the familiar into something wholly enchanting and otherworldly.

And it seems to me that beyond being a maker of beautiful photographs, Stephen Paternite is also a poet. Think of his work as optical writing - a wordless, arresting poetry - articulating the luminous persistence of nature’s quiet magic.

Posted by Tom Wachunas at 7:42 AM No comments:

From my front yard, ARTWACH goes BIRDWATCH. Focusing on a few fabulous frequent flyers feasting on fast food is more fun than flipping through Facebook. Fancy that. 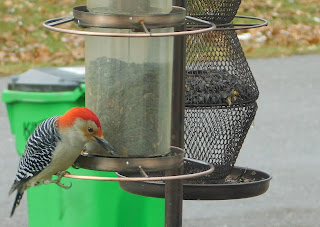 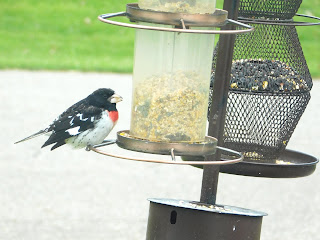 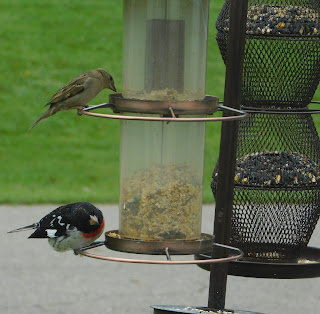 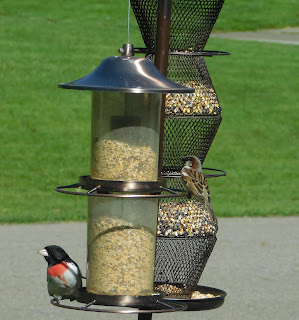 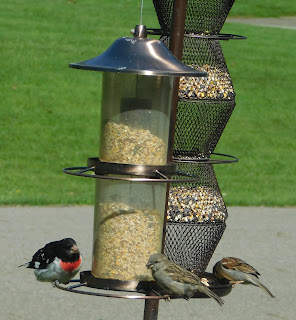 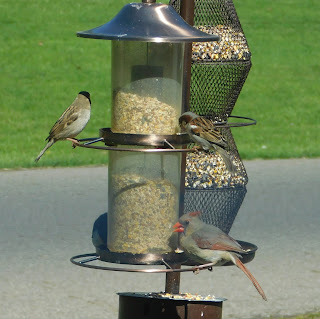 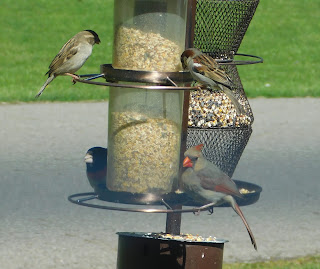 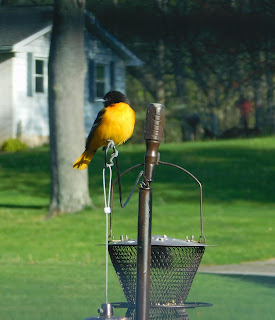 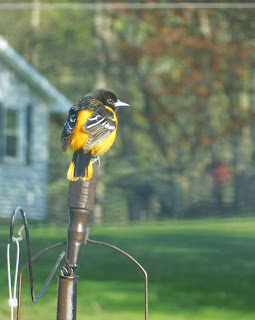 Posted by Tom Wachunas at 8:05 AM No comments:

1: to gather grain or other produce left by reapers / 2: to gather information or material bit by bit

1a: to pick up after a reaper / b: to strip of the leavings of reapers - glean a field
2a: to gather (something, such as information) bit by bit - can glean secrets from his hard drive / b: to pick over in search of relevant material - gleaning old files for information

3: FIND OUT - The police used old-fashioned detective work to glean his whereabouts

Planting time. The seed of an idea: Once this Covid crisis has eased enough, some ambitious soul(s) out there should seriously think about organizing an exhibit of works made by local artists working through this strange and stressful time of social distancing. A celebratory commemoration of resilience and productivity. A harvest festival. In the right setting, it could be a truly inspiring and stunning show.

Meanwhile, consider this post a very modest exercise in virtual curating. My Facebook browsing has yielded many encounters with artists I’ve written about in the past. This gathering of digital images, all found in their recent Facebook posts, is certainly not an exhaustive look at what’s been pouring out of studios in these parts. It’s a love letter of sorts. Virtually yours, think of it simply as me being…grateful. Be well, everyone. 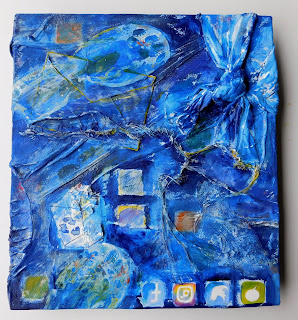 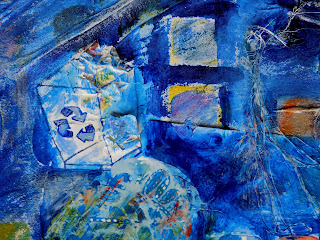 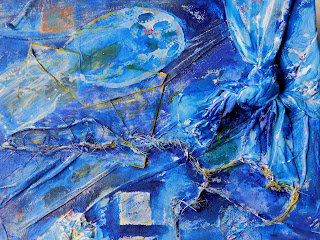 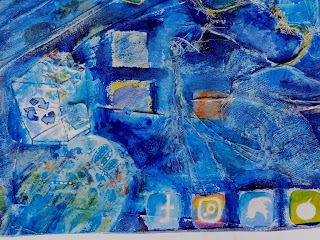 One of the most important things you learn from the Internet is that there is no 'them' out there. It's just an awful lot of 'us.' - Douglas Adams
The Internet is neither good nor bad. It's neutral - it becomes for each of us exactly what we bring to it.  - Glennon Doyle Melton

The Internet is the most important single development in the history of human communication since the invention of call waiting.   - Dave Barry

When the Internet first came, I thought it was just the beacon of freedom. People could communicate with anyone, anywhere, and nobody could stop it. - Steve Wozniak

More musings from my studio. I’ve been thinking about – fretting over, actually – sophisticated distance learning programs and remote instruction platforms as they necessarily apply to my current situation as a teacher of art appreciation and art history. At this point my brain is floundering in “the cloud” of Internet potential and practice. What is an old-school lecturer like me to do in the face of the growing demand for online teaching?

At the moment, I’m making art about understanding another language I call Digitalese. And once again (as in the previous work I addressed here on April 21), I’m immersed in an assemblage/collage dialect. This newest manifestation is called #tangledweb. I’m seriously thinking of subtitling it html blues. HTML – Hyper Text Markup Language. Hyper- textured, and marked up, to be sure.

I’m stepping slowly into a complex realm, twisting and turning in a mysterious matrix folding in on itself. It’s got me tied up in knots, a little unraveled at the edges, and feeling blue about it. Just like a jittery kid on the first day of school. How ironic.

Posted by Tom Wachunas at 5:39 AM No comments: