“…Is it not crystal clear, then, comrades, that all the evils of this life of ours spring from the tyranny of human beings?...Man serves the interests of no creature except himself…”   - from the pig named Major, in his speech to the animals from Chapter 1 of Animal Farm, by George Orwell

Remaining performance dates are Friday and Saturday, November 20th-21st. Tickets are $5 and can be purchased at

Once your ticket is purchased, on the day of your selected performance, you'll receive a link at your e-mail address at 12:01 AM; this link will enable you to watch the production at any point during that 24-hour period.

One viral casualty of this protracted time of social distancing is the art of live theatre. With local playhouses empty and their stages dark, where can an ardent theatre enthusiast go? Why, to digital technology, of course – that ubiquitous deliverer of virtual (though not always virtuous) life. Zoom is in the room, effectively making my desktop monitor a compact stage in itself, even if it is only a flattened, albeit inventive facsimile of 3D theatrical reality. An illusion of an illusion, if you will.

Still, this project nevertheless delivers a skillfully crafted portrait and an otherwise deeply probing manifestation of the characters and their circumstances. So for the moment, you might consider putting aside any expectations you may have of seeing a conventional-looking stage production.

There aren’t the traditional stage accoutrements here such as the elaborate artifice of costumes, variable lighting, or constructed sets. That said, and with thanks to the excellent camera work and editing by Josh Branch Productions, the incorporation of 46 artworks by various artists in the concurrent Animal Farm exhibit at Stark Library - like so many quotation marks or exclamation points - greatly enhances the dimensionality of the on-camera oral narrative. The proceedings unfold in a found environment, an actual farm, bathed throughout in natural light. It’s a bright, sunny day for a dark, satirical allegory.

The seven student actors, directed by Craig Joseph, deliver this unusual presentation with an intense, emotive clarity that is truly riveting from beginning to end. They’re not simply reading Orwell’s words back to us, vivid as those words certainly are. Often looking directly into the camera, they perform the words with earnest credibility, actualizing them in the same way eyewitnesses to a revolution might look us in the eye as they report what they have experienced. And interestingly enough, beyond the specific events being described in Orwell’s narrative, the most compelling, tangible actions in this entire production are to be found in the sharply honed authenticity of facial expressions and mesmerizing vocal inflections from each these gifted performers as they confidently trot, canter, and gallop through the story.

Here’s hoping that in the not- too- distant future, we’ll see them again, electrifying our local stages.

Posted by Tom Wachunas at 11:45 AM No comments:

“It's with great excitement that I invite you all to ANIMAL FARM: A 75th Anniversary Appreciation… I've revived the Translations Art Gallery brand and partnered with Stark Library to host an exhibit of 52 scenes from the book, created by artists from Stark County, Ohio, and around the nation. These are people whose work I treasure and admire and I'm so honored to have them all creating and exhibiting under one roof.”   - Craig Joseph, curator

Click on this link for digital catalog of entire exhibit, and purchase information:

Sign up here to attend a Zoom Panel Discussion with several of the participating artists on Thursday, Nov. 12, 7 to 8 p.m.:  https://events.starklibrary.org/event/4656967

First, let me repeat what I wrote here in my post from Oct 19. “I’m thrilled and grateful that Craig invited me to exhibit a new work for this show. In my re-reading of George Orwell’s classic tale about a rebellion of farm animals against their human keepers, I was startled at how the vivid narrative seemed to literally pop off the pages and invade my consciousness, my sense of place in time. While Orwell’s novel was a bitterly satirical allegory of the Russian Revolution and its tumultuous aftermath, I felt the story explode beyond the confines of its time. An ignoble ethos of tyranny and corrupted ideals, the story still lives today, outside the book. A then has become a now.”

The exhibit is among the most riveting thematic group shows I’ve ever seen in Canton. With 54 works by 53 artists, it’s a megadose of remarkable creativity and an otherwise a spectacular panoply of aesthetic styles and media.

Craig Joseph’s curatorial prowess is in full force here, reminding me that superb curating is a performative act in itself. He mounted the individual artworks as numbered episodes, each with an accompanying brief synopsis, retracing the order of the story’s events as they unfolded in the novel. So even if you’ve never read the book, or forgotten it, you can still follow the narrative. He has also provided a complete digital catalog of the artworks (click on the hyperlink above). For the duration of the show, his vigilance goes further still with his very astute comments via live Facebook posts wherein he provides a closer look at two pieces every day (except Sundays).

Much more than a collection of storybook “illustrations” in the conventional graphics sense, the artworks here form an altogether stunning, multi-dimensional translation of Orwell’s novel. Maybe you could think of this gathering of artists as a singular entity on task to not simply retell an old story, but to illuminate, enhance, and intensify it with a new sense of immediacy – even urgency. Many of these fervent creators have articulated uncanny parallels between Orwell’s descriptions of sociopolitical chaos and depravity, and the distressing conditions of our own time. A wild journey, to be sure, and one that yields truly compelling art.

One more note: be sure to check out ANIMAL FARM: A FABLE IN TWO ACTS, an online theatrical production by Malone University Theatre, adapted by Nelson Bond and directed by Craig Joseph, 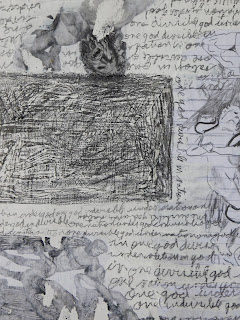 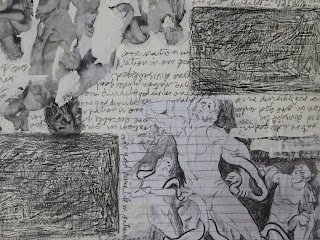 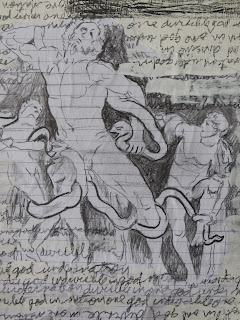 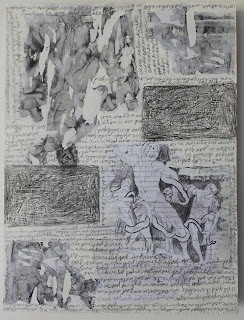 “…Cursive, after all, remains for me the most urgent if not earnest form of drawing.”  -from my Oct. 19 ARTWACH post

My hypergraphia is acting up again, prompting yet another response to this protracted season of national trauma. These are turgid times. Caught up in a torturous maelstrom of manic anxiety and sociopolitical tensions, we writhe, blurting our pledges and prayers through gritted teeth, desperate for deliverance from our disease and dissension.

My most recent artwork (which I have tentatively titled Politics and Religion) was sparked by watching a TV news report on the presidential election as I simultaneously flipped through one of my art history books. Something ignited in me when I saw a photograph of Lacoön and His Sons. It’s a magnificent, life-sized Greek marble sculpture from the 1st century BCE. The sculpture illustrates a moment from the Trojan war when the priest Lacoön warned Troy not to let the giant wooden horse, “gifted” by the Greeks, inside the city walls. The gods were angered, and sent serpents from the sea to kill the priest and his two sons.

My graphite rendering (along with some altered photo-transfers) of the statue is not, however, intended as a remembrance of the mythological narrative per se. Nor is it necessarily a commentary on divine wrath. It’s more a metaphorical springboard into my concerns about the current spiritual state of our country - the gripping drama of a society in the painful throes of a tragic identity crisis.

And so it is that my piece does include a written (in cursive) narrative of sorts. It’s drawn from a phrase in the American pledge of allegiance: “…one nation, under God, indivisible…” My written script is a series of repeated re-arrangements of the phrase’s original word order. Call it a serpentine, run-on scrawl, creating other meanings, questions, and emphases suggesting a troubled society adrift in its dividedness. InoneGodundernationdivisible.underonegodgodnationonedivisiblenationingodunderinonegoddivisiblenationinonenationunderdivisiblegodinonedivisiblegodundernationonenationgodindivisibleunder Etc., etc.

One nation? Under God? Indivisible? Really? What have we wrought?

Posted by Tom Wachunas at 5:32 PM No comments: