Describing this season’s final concert by the Canton Symphony Orchestra at Umstattd Performing Arts Hall on April 26 brings to mind a bevy of feel-good bromides. Still, none would be more apropos than “out of this world.”
Everything that makes this orchestra truly noteworthy was in full force. With just two works on the program – Mozart’s Symphony No. 41, “Jupiter”, and Holst’s The Planets, the orchestra under Maestro Gerhardt Zimmermann thrilled the capacity audience with its broad palette of commanding sonority, astonishing technical virtuosity and gripping expressionism.
Zimmermann’s reading of Mozart’s greatest symphonic accomplishment was brilliantly balanced in its moderate pacing, precision of textures, and palpable affection for Mozart’s intricate, complex mixing of thematic motifs. That intricacy is clearly apparent in the first movement’s melding of majestic pomp with gentle graciousness. Even more so, the second movement is a sumptuous triad of contemplative, fiery and calming moods.
But it’s in the ebullient finale where Mozart pulled out all the fugal stops as it were. The coda is a magnificent soundscape of five interwoven melodic elements and the orchestra met its dizzying contrapuntal challenges with remarkable clarity and authority. This was no headlong rush into perfunctory flamboyance, but rather a stunning surrender of sorts - an impassioned caress of the breathtaking power of the music itself.
While Gustav Holst’s The Planets is certainly less complex than Mozart’s “Jupiter” symphony in terms of its seven movements’ thematic structures, the work is nonetheless Olympian in its dramatic thrust.  Augmenting the already cinematic character of the music were the gorgeous HD projections on a giant screen above the orchestra. They were originally created by filmmaker Duncan Copp in cooperation with NASA and Jet Propulsion Laboratories for a 2009 production by the Houston Symphony. The images were a constantly moving, hypnotic montage of photos from satellites, surface rovers and computer generated animations of vast alien landscapes.
The orchestra has never been more startlingly thunderous, particularly during the brutish, menacing tumult of the first movement, Mars, the Bringer of War, or more committed to brassy, heroic jubilance than in the fourth movement, Jupiter. Balancing out these and other moments of rattling aural intensity were many powerful passages throughout the work wherein strings, winds and percussion soared into lyricism so crisp and shimmering that the air in the auditorium seemed to crystalize.
As if defying the beautiful mass and poetic gravity of the previous six movements, Holst fashioned his final movement, Neptune, the Mystic, not as an outward burst of otherworldly wonder, but a diaphanous falling away of melodic fragments.
Like so many meteoric trails of light, the orchestra evanesced into distant harmonies. Then, amid the instrumental fading, the faintest of eerie intonations from an offstage women’s chorus gradually emerged into a haunting, wordless cadence that in turn progressively drifted to nothing.
This silence of the spheres was indeed a potent, mystical ending. Yet days after the concert, it continues to speak volumes in my memory – not so much of cosmic phenomena, but of the mesmerizing phenomenon that is the Canton Symphony Orchestra.


www.cantonsymphony.org
Posted by Tom Wachunas at 3:08 AM No comments:

On the Commendable Wit and Wisdom of Comedienne Joan Rivers 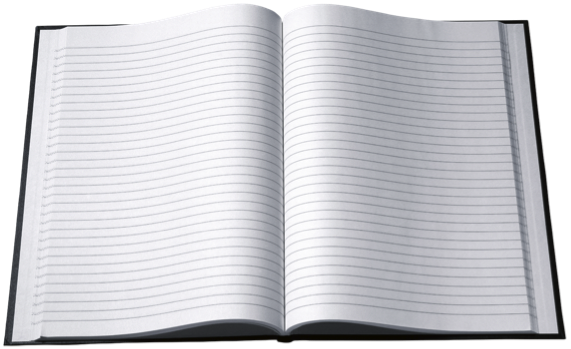 Posted by Tom Wachunas at 10:00 AM No comments: 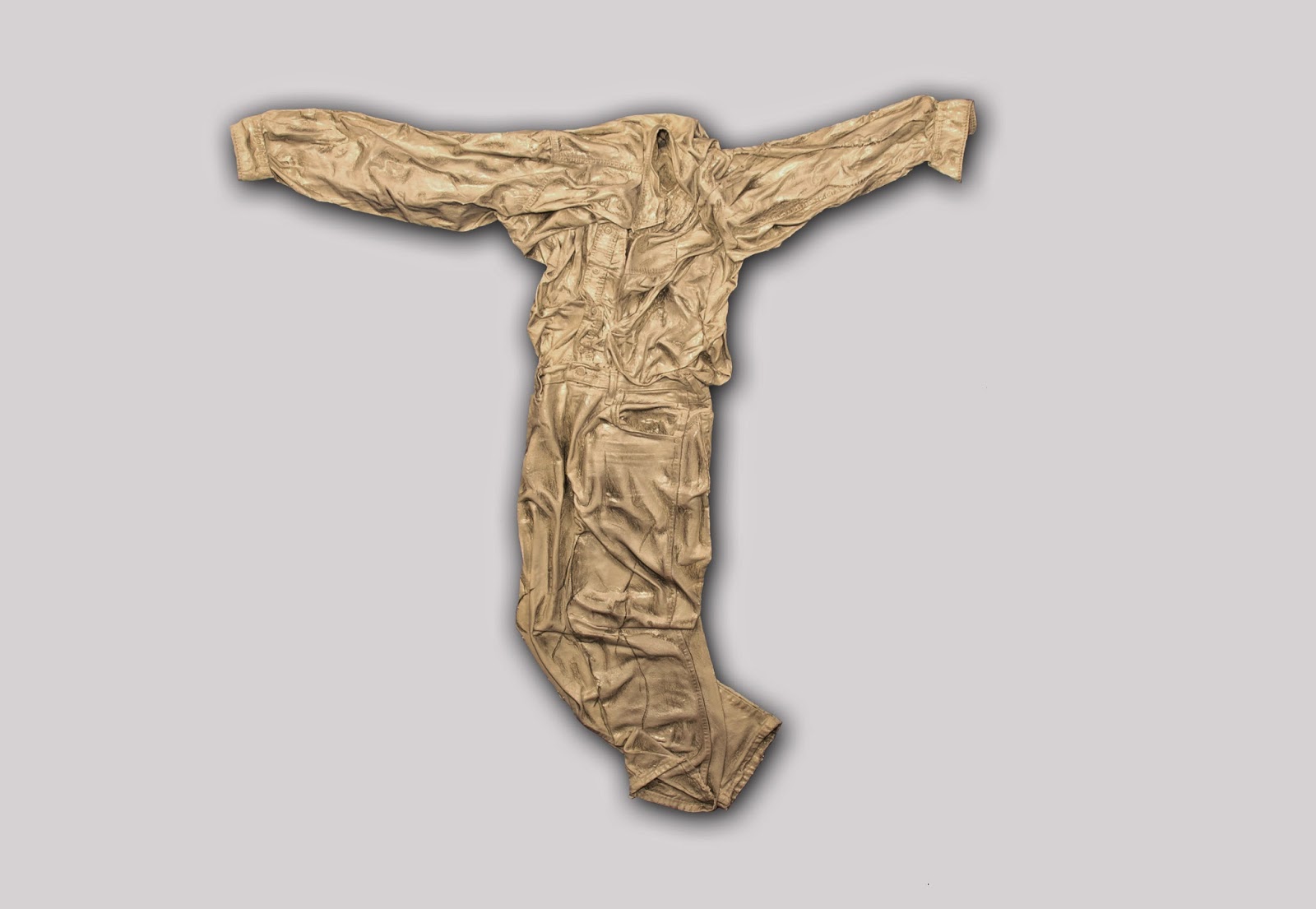 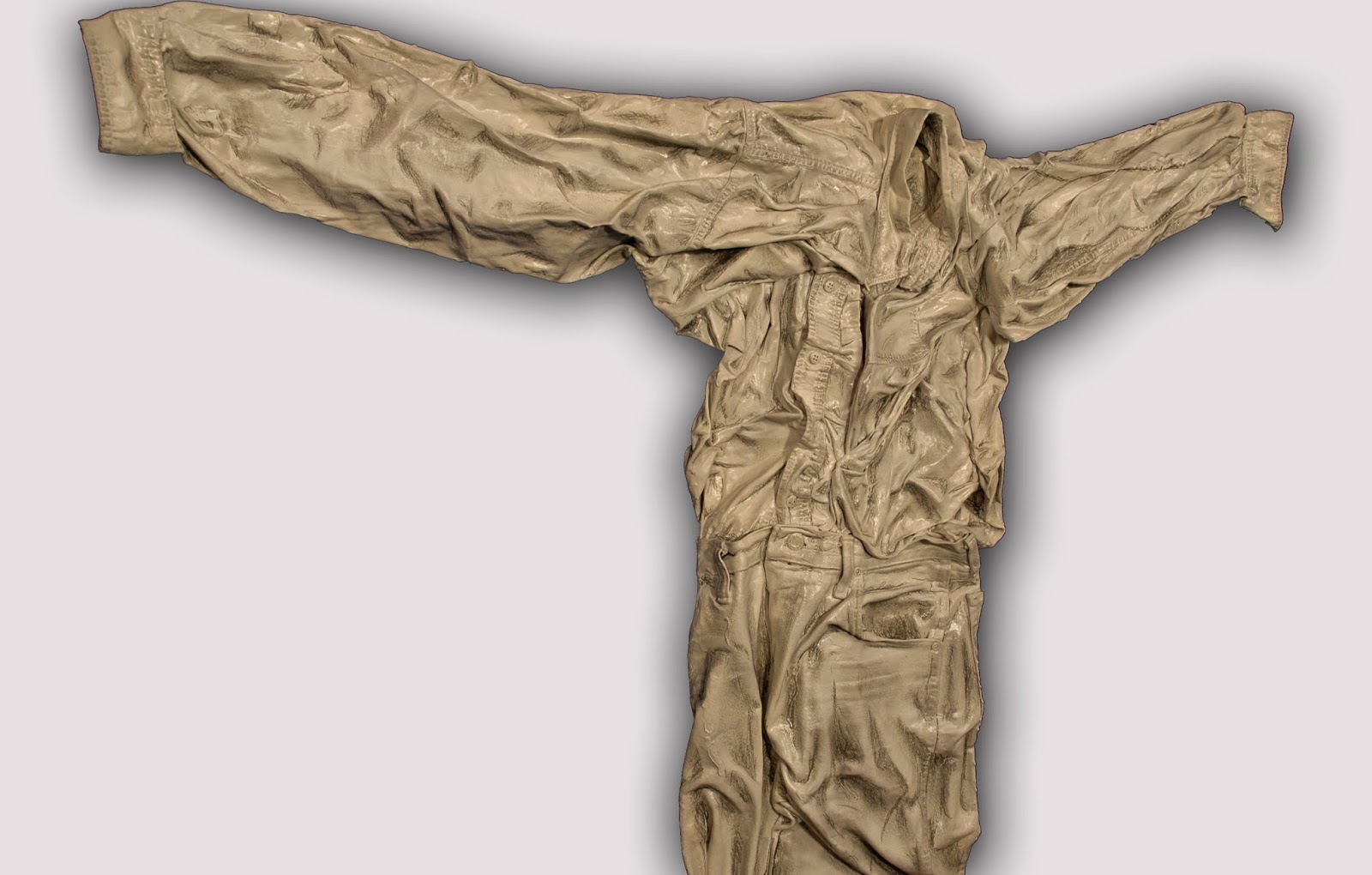 It’s Holy Week. I’ve come to savor it as a time to consider and celebrate exactly what Jesus meant when he uttered his last words before dying – “It is finished.”


Notice he didn’t say, “My life is finished.” “It” was his purpose on earth, the culmination of his incarnate walk among us. It was his design for all of humanity – an immutable, perfect design. It was the invitation to step into everlasting communion with him – our destiny, which he planned before any of us were here.


In the crucible that is my still-evolving understanding of his very real, living presence, Jesus continues to make an eternal future with him accessible by dwelling in me. I am, to be sure, an imperfect abode for his Spirit. I am corrupted and corruptible, yet miraculously and progressively renewed as I am caught up in the throes of transformation.


And so here I get around to offering for your consideration a 2013 work of mine that was included a short while ago in the Sacred Voices exhibit at the Canton Museum of Art (pictured above). Titled Drawn Clothes to Him, this mixed media (paint-stiffened clothing, graphite, 48” x 48”) wall piece is an ancestry totem of sorts. In that it takes a form suggestive of Jesus crucified, it is intended to declare my identification with him. This spiritual self-portrait is a meditation on New Testament writings by the apostle Paul, specifically those which describe believers as new beings, immersed in a spiritual process of complete identification with Christ crucified and risen.


Paul wrote in 2 Corinthians 5:17, “Therefore, if anyone is in Christ, he is a new creation; the old has gone, the new has come!” Particularly inspiring and relevant are these words from Galatians 2:20, “I have been crucified with Christ. It is no longer I who live, but Christ who lives in me,” and again, from Galatians 3:27, “You are all sons of God through faith in Christ Jesus, for all of you who were baptized into Christ have clothed yourself with Christ.”


These cathartic verses would be meaningless were it not for what transpired in the last earthly days of Jesus – what we now call “Holy Week.”   Drawn Clothes to Him was made to be a physical expression of these verses – a tangible prayer of surrender to, and gratitude for what Jesus made possible.


Finally, and with my deepest thanks, consider these additional words as Easter approaches:


Rejoice in the Lord always. I will say it again: Rejoice. Let your gentleness be evident to all. The Lord is near. Do not be anxious about anything, but in everything, by prayer and petition, with thanksgiving, present you requests to God. And the peace of God, which transcends all understanding, will guard your hearts and your minds in Christ Jesus. (Philippians 4: 4-7)
Posted by Tom Wachunas at 1:09 PM No comments: 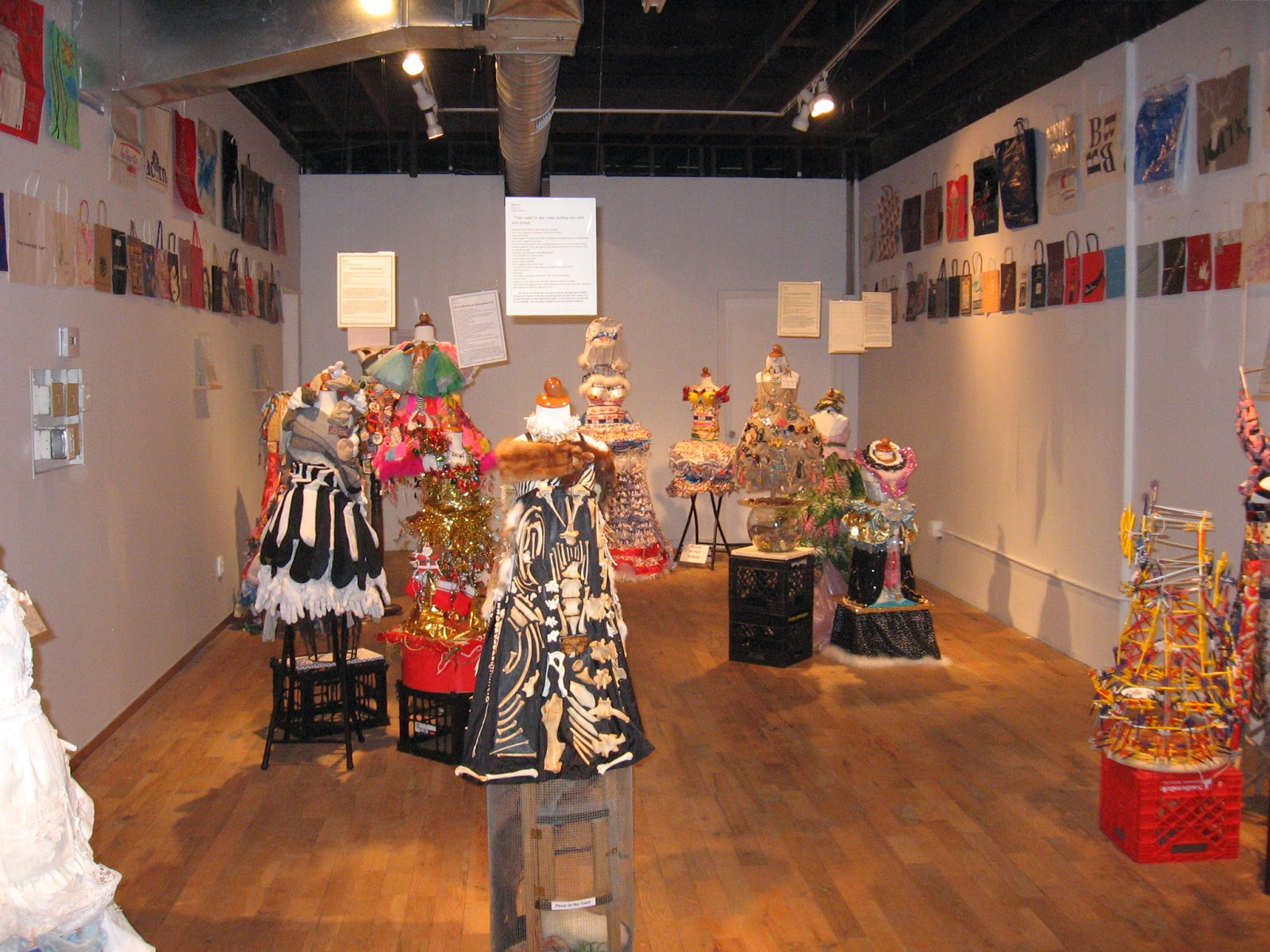 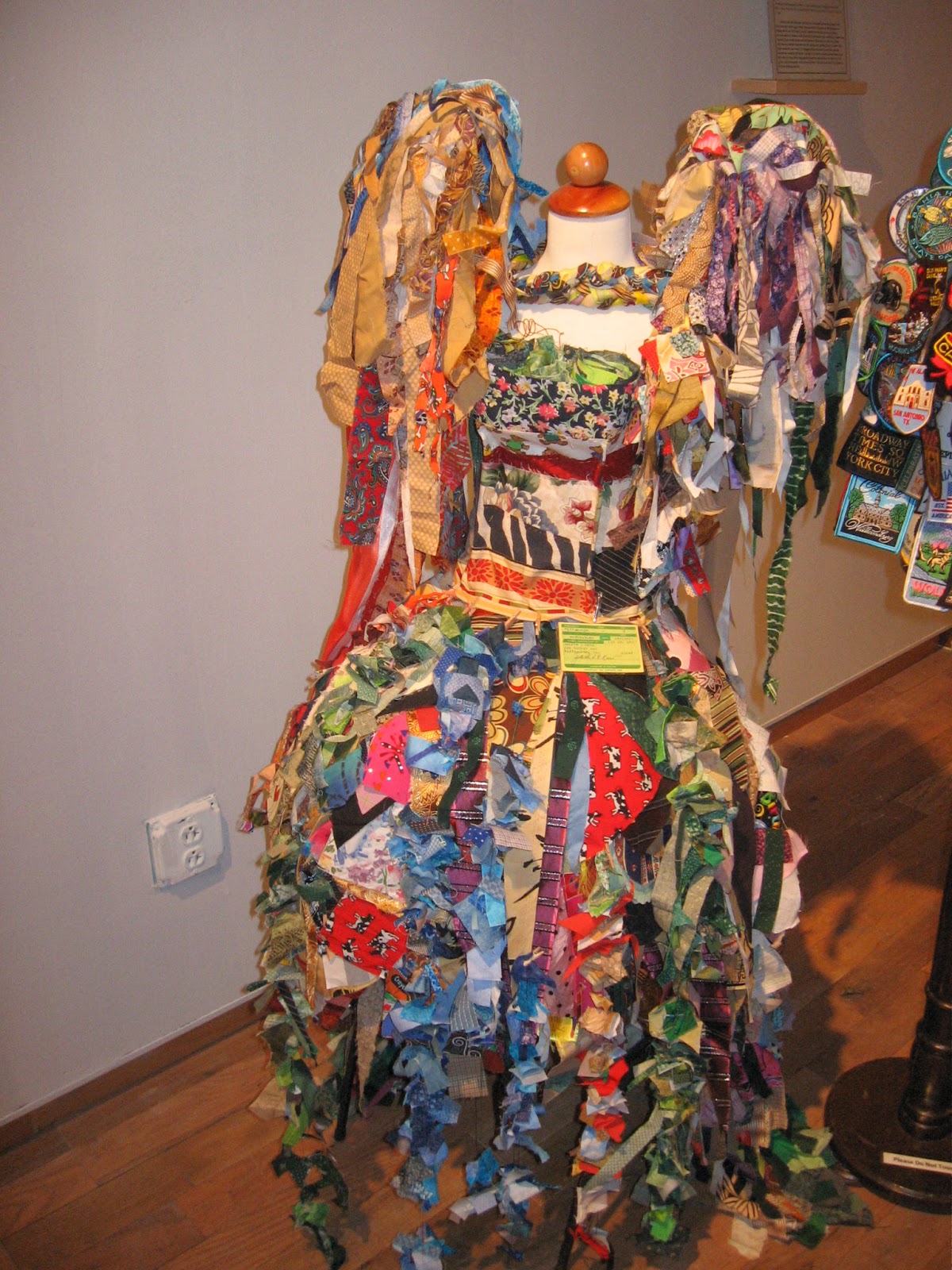 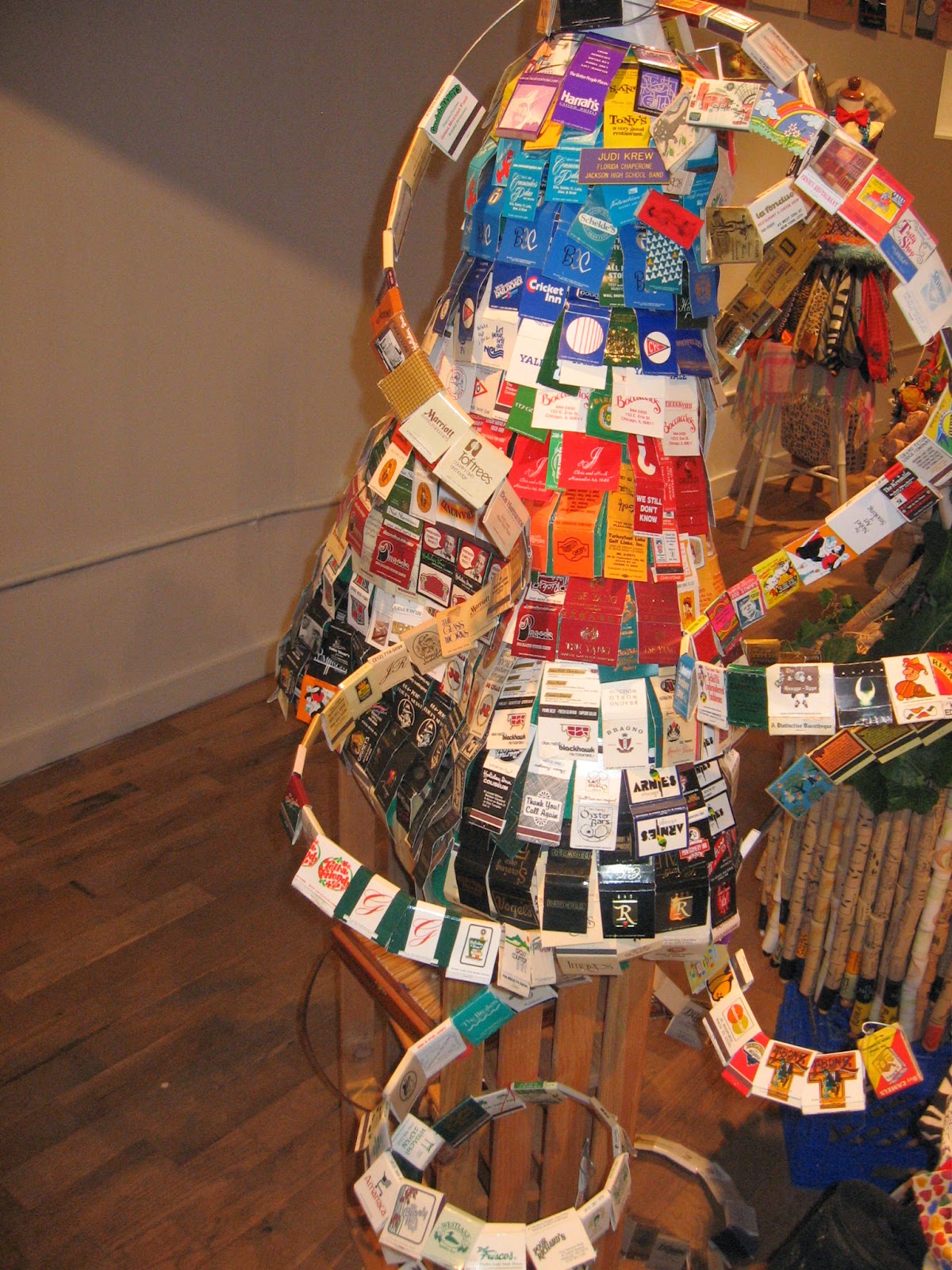 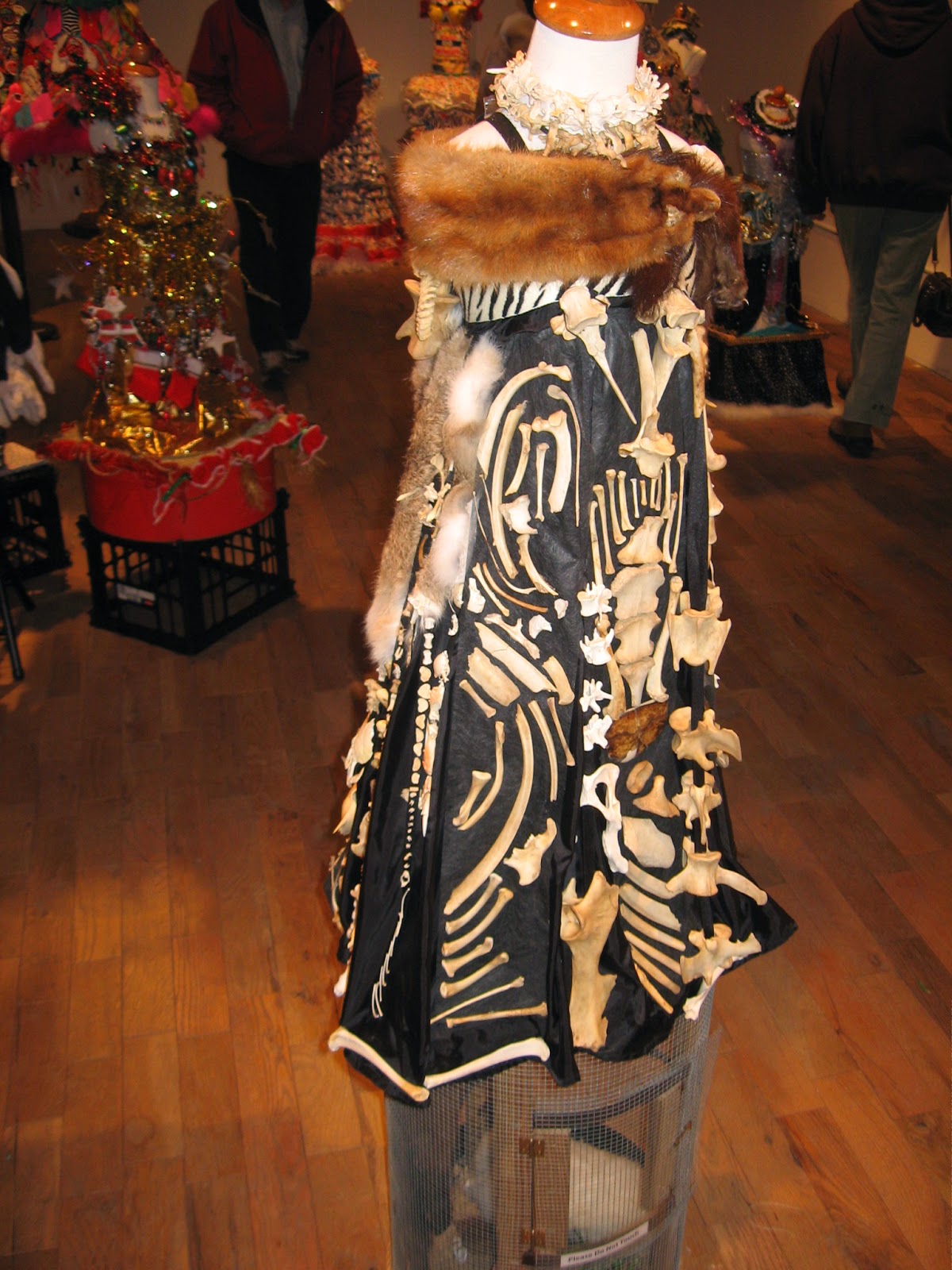 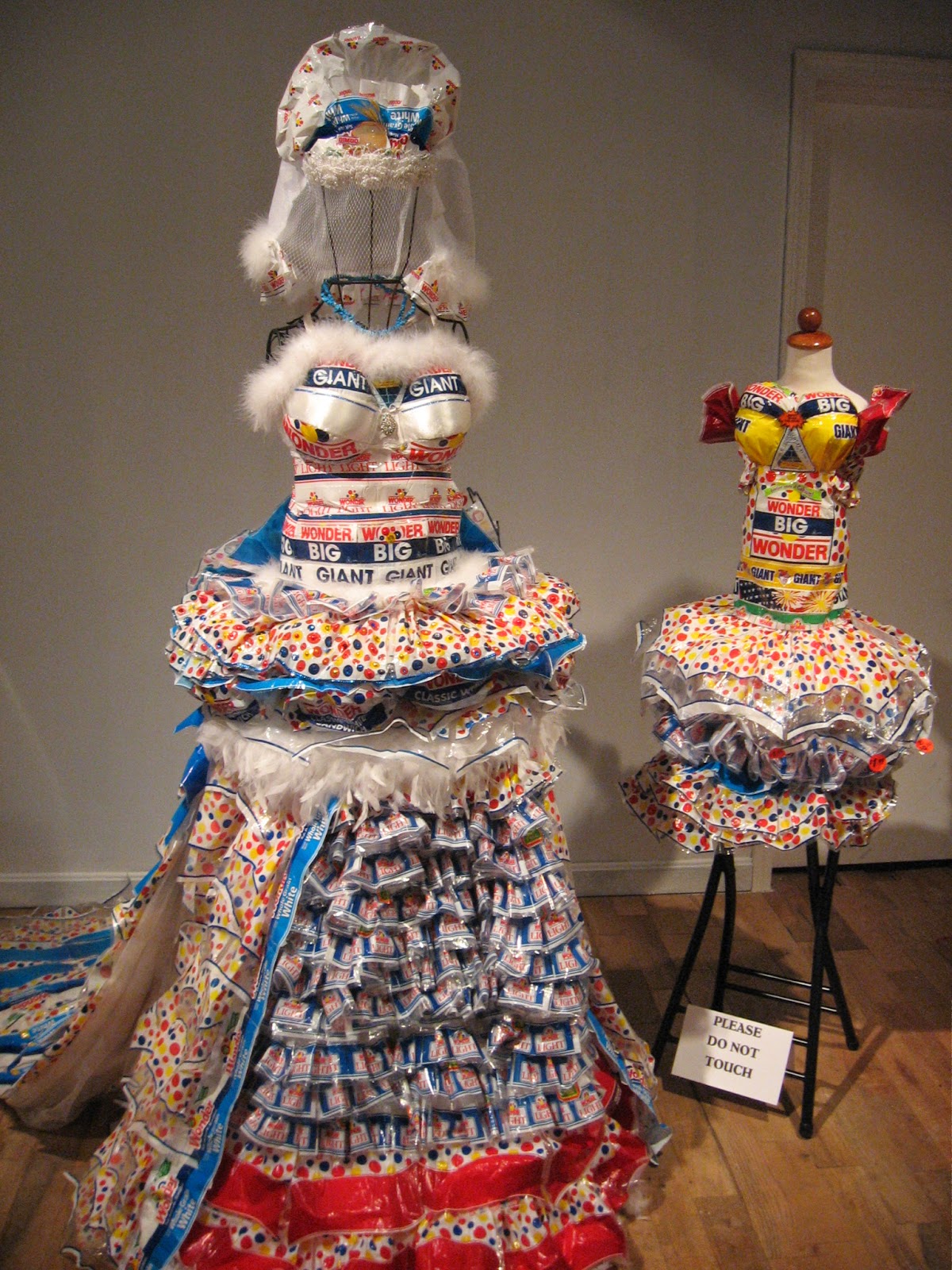 “A house is just a place to keep your stuff while you go out and get more stuff.”  - George Carlin


Assembled assorted appurtences of artistic attire. A bodacious bric-a-brac boutique. A curious collector’s colloquium on cheap chic. A disambiguation of dressy detritus. An elaborate exposition of eccentric entities. A fanciful flurry of floordrobes. A goofy gamut of glad rags.


Apparently, this show has awakened the word hunter/gatherer in me. It’s an appropriate enough pursuit when considering the content and presentation of Judi Krew’s Hoard Couture.


With this exhibit, she showcases her ongoing line of sculpted dresses. It’s a sprawling pastiche of myriad odds and ends constructed to look like whacky pop diva gowns from another dimension (eat your hearts out Lady Gaga, Nicki Minaj, Ke$ha, Miley Cyrus, Katy Perry, et al.). But that’s a somewhat superficial impression. So don’t make the mistake of neglecting to read Krew’s statement as well as the title documents that accompany each work.


You might call these objects the evolved culmination of an error in judgment - what she calls in her statement “…a great idea gone totally wrong.” Once upon a time, Krew determined a protocol for preserving personal memories by making dresses from all manner of well-organized and stored ingredients. So she insists she’s not a “hoarder” in the pathological sense of the word. Understandable enough. Call her, then, an avid gatherer of stuff with which she makes very funky armor against forgetting. She planned to put her creations on hangers. However, the formal demands in manifesting her idea presented unforeseen problems to be solved. Krew needed to be not just an inventive clothier, but a structural engineer as well. The dresses far outgrew closet storage, blossoming into full-fledged freestanding sculptures. And they lived heftily ever after.


A host of heady hilarities. Judi-cious jumbles of jocular junk. Lavish lumps of levity. A marvelous marrying of materials. A pretty profusion of processed petticoats.  A riotous raiment roundup.


Humorous word-play is a significant element in Krew’s descriptions. One dress laden with animal bones and fur is marked, “They used to say I was nothing but skin and bones.” Another made of matchbooks, “This dress could be really hot if it were not so striking.” And another - a second version of a wedding gown made from plastic Wonder Bread wrappers and which melted in an unprotected gallery window – reads, “She rises again…it was the yeast I could do.”


Beyond the sheer spectacle of meticulously composed color schemes, engaging pattern dynamics and entertaining tactile ornamentation, these works are intriguing celebrations of the power of physical matter to evoke the intangible. Ordinary consumerist tchotchkes take on a vibrant life of their own and become extraordinary totems of remembrance – what Krew likens to “…personal encyclopedias or scrapbooks.”


Snappy samplings of surreal styles. A treasure trove of tantalizing textures. A vantage point on variform vanities. Wondrous wads of whimsicality. A zenith of zany Zeitgeist.
Posted by Tom Wachunas at 2:26 PM No comments: