“Instead of just looking at the finished product, I want people to have a look at the process…I selected artists where you can see the specific building blocks better.”  -exhibit curator Michele Waalkes, from an article by Dan Kane for The Canton Repository

Lately I’ve been starving. As in greatly missing what was once a lively art gallery scene in downtown Canton. While that scene was already experiencing a slow but sure diminishing long before the pall of COVID19 settled on us, the pandemic has only made matters worse in terms of regularly accessing what few art venues remain. In any case, THANK YOU to The Hub Art Factory for continuing to provide some aesthetic nourishment. My only regret is the lateness of this post, and for that I sincerely apologize.

The artists in this eclectic gathering have provided written statements regarding the conceptual thrust and/or process involved in the making of their pieces, and in a few instances, framed shadowboxes containing samples of their raw working materials.

Jacques Jackson makes his charming mosaics with various sorts of glass glued to plywood substrates. He’s interested in fashion design among other things, and often inserts bits of patterned fabric behind the glass shapes. The contours of the mosaics are cut to suggest figures with softly curving torsos, as if moving in an exotic dance.

The mixed-media assemblages by Jennifer Omaitz, at once dense and airy, are examinations of stacked architectural structures. She tells us in her statement that they’re inspired by architects who “…address space constraints, refocusing the design of living environment to create a sense of community and reduce the environmental footprint.”  From this theoretical starting point, Omaitz’s constructions further explore “…questions surrounding climate change, and post-modern architecture, modular architecture, and psychological spaces.” Complex conditions indeed, these are intriguing maquettes – models of buildings precariously balanced or teetering in midair, and seemingly on the verge of tipping over.

The hand-woven linen yarn weavings by Stephen Tornero are exquisitely crafted, shimmering abstractions that might be transparent organisms or perhaps shifting landscapes. “I am inspired by the colors I find in nature,” he says in his statement, “and how they interact with artificial colors of electric light.”  His mesmerizing pieces are a dynamic tour-de-force of myriad threads that seem to breathe through undulating hues and patterns.

Liz Maugans’ “Apathy Parade” series of wood intaglio relief prints is her response to the extreme sociopolitical divisiveness that emerged during the 2016 elections, and which has certainly become even more intense these days. The banner-toting “people” in her images have been reduced to anonymous pixelated blurs – clusters of amorphous Ben-Day dots. What exactly they’re supporting or protesting isn’t all that clear either. Maugans explains the words on their signs this way: “…I lifted rants and responses from social media debates where people were clearly not doing their own research and co-opting others’ arguments that don’t stand up to credibility…”

Maugan’s images are – pardon the pun – arresting and timely. They make me wonder about the identity of American society. Who are we really, and where are we going? Maybe we need to be concerned with a pandemic of another sort – the kind that has blurred us into a viral meme culture, entrenched in the scene-and-herd mentality of the social media masses.

Posted by Tom Wachunas at 4:12 PM No comments: 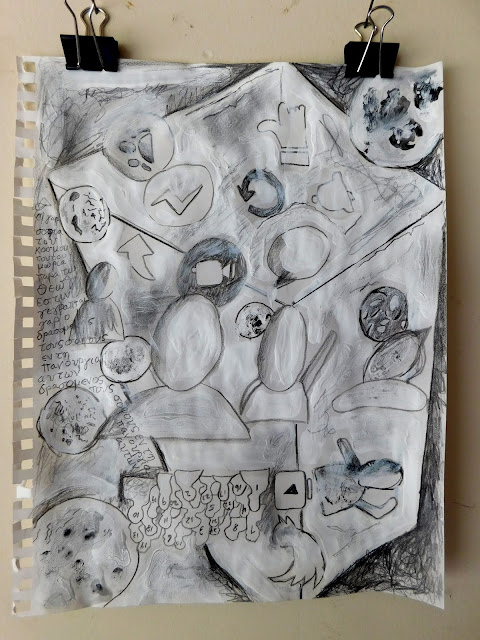 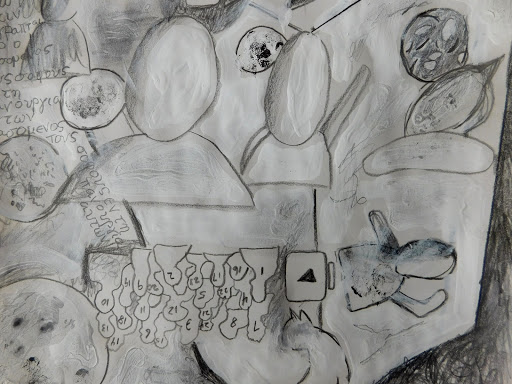 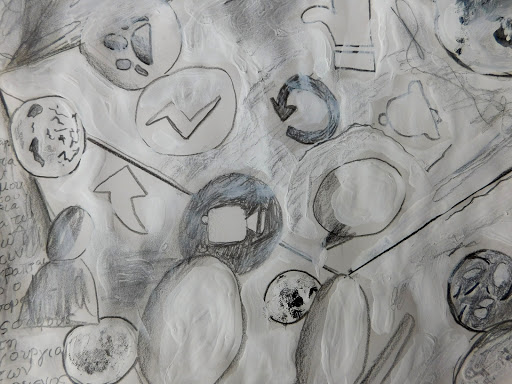 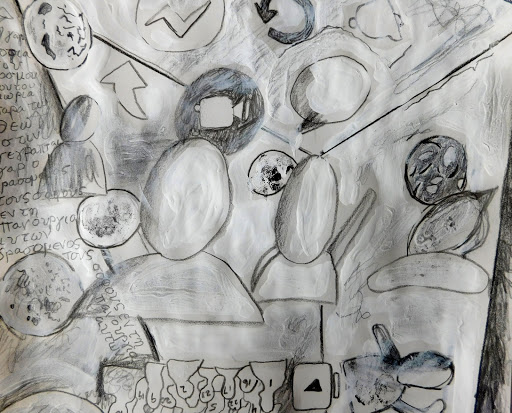 "Drawing is putting a line (a)round an idea."  - Henri Matisse

Here’s a new drawing of mine called Remote Yearning: Prompt and Circumstance (graphite and acrylic on sketchbook paper). At first, I regarded this return to a black-and-white dynamic as a possible starting point for a more elaborate work replete with lots of painterly textures, along with some robust color and collage elements, and not too unlike a few of my recent Summer pieces on wood panels. Some day, perhaps, but not yet.

I’m satisfied at the moment to offer it simply as a work of abstract writing -  a codified reaction to the vexing challenges of designing an online version of the course I’ve been teaching at Kent Stark (“Art as a World Phenomenon”) for the past 13 years. For most of this Summer I’ve been reluctantly navigating the technological muck of tutorials and webinars on using digital media platforms and tools for remote teaching. Thanks to the necessary practices that Covid19 has wreaked upon our schools and universities, we’ve become dependent on the Internet, like never before, to facilitate education. I remain unenthused, even questioning the efficacy of “distance learning,” all the while missing the hallowed (and still wisest) traditions of  real, face- to- face teaching…teaching as a true performance art.

So this drawing is by a complainer. He’s temporarily floating and aimless, cut, dragged, pasted and downloaded (or is it uploaded?) into a sea of infection connections - icons, tabs, hyperlinks and prompts, screens within screens within screens. In the end maybe it’s all just an exercise in remote yearning.

Posted by Tom Wachunas at 9:32 AM No comments: