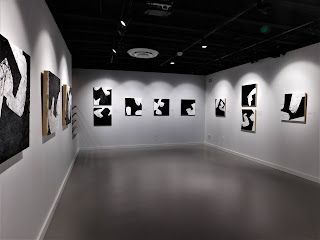 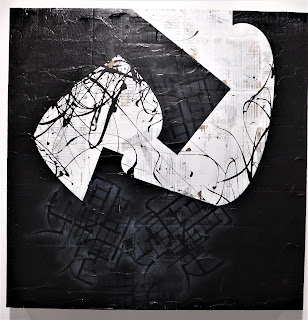 “Letters act as practical and useful signs, but also as pure and inner melody.”  - Wassily Kandinsky

“Handwriting is a spiritual designing, even though it appears by means of a material instrument.”  - Euclid

“Calligraphy is the most direct form of all artistic expression. Just as each movement of the dancer is absolute, so every gesture of the calligrapher is essential. It is not the meaning of the character but the writing–the movement of execution and the action itself–that is important.”  - Tseng Yu-ho Ecke

From Merriam-Webster: Definition of calligraphy / 1a: artistic, stylized, or elegant handwriting or lettering / b: the art of producing such writing /

2: PENMANSHIP / 3: an ornamental line in drawing or painting

Born and raised in Shanghai, China, John Chang is now based in Southern California. At one point in his statement for this solo exhibit, he writes: “…By invoking calligraphic forms, I am commenting on the distortion of language, but I am also reclaiming the energy of the written word. Tapping into my ancestral roots, I also use pigments for their symbolic power. For example, black and white are the colors of most ink painting but also represent yin and yang… I consider myself a 'spiritual escapist.’"

Escape from what, and into what? Frankly I’m not exactly sure. Not able to interpret the elegantly drawn Chinese characters/words floating throughout his paintings like so many ghosts, I can only guess. I’m reminded that one of the paintings in the show is called, interestingly enough, Beyond Interpretation. This is not to say that the process of interpretation can’t be intriguing. Here, it most certainly is.

For starters, remember that the traditional strictures of Chinese calligraphy require a mastery of brush (or pen) and ink. Chang’s arresting paintings are a departure from that ancient discipline. An escape? They regularly employ large, shiny textured shapes (or plains) rendered in the plastic patina of black acrylic paint. A nod to modern Western industrialism?

There’s plenty of ambiguity here. Visual tensions. Weight and counterweight. Yin and yang. Positive and negative. Are those precisely-edged black shapes -  looking like so many puzzle pieces - macroscopic views of partially defined calligraphic letters? Or is that more what the white shapes are doing? Which is the positive shape, which is the negative ground? Indeed, both the black and white fields are transparent, revealing a variety of underlying as well as superimposed characters, marks, drips, scrapes, and textures. In some of the paintings, Chang has incorporated scraps of corrugated shipping boxes. The Amazon-delivered pleasures of American consumerism?

A synthesis of text, context, subtext. Abstractions. Gestures. Actions of the hand to set the mind traveling. Metaphors for a meeting of cultures, a hybridization of identities.

So as a viewer, maybe on one level you could commence your own inter-actions with these fascinating works by becoming a spiritual inquisitor. Think  of them as (I can just about hear your groaning now)… guesstures.

Posted by Tom Wachunas at 2:00 PM No comments:

Meanings to an End

Meanings to an End

“…Now, you’re either on the bus or off the bus…”  - Ken Kesey, quoted in the Tom Wolfe novel, “The Electric Kool-Aid Acid Test”

Back on May 4, I received an email from curator Craig Joseph (remember Translations Art Gallery in downtown Canton?) with an invitation. Here’s most of the email content:

“ Ladies and Gents... I am very likely going to be departing Canton this fall in pursuit of an MFA or some other new adventure, but before I go, I want to create with you one last time under the Translations banner.

To that end, I've poured over 10 years of files to pull together a list of most everyone who has ever exhibited in a Translations show before and I'm inviting you all to be part of one last hurrah…

The show is called THE LAST HURRAH and I'm inviting you to reflect artistically on some sort of ending, a last something, a finality. Might be the ending of a favorite book or movie, might be the ending of a relationship, might be a historical ending (the Titanic sinks or Marie Antoinette gets beheaded), might be getting your vaccine. It's entirely up to you what you choose…”

The exhibit is planned to open at the Main Branch of Stark Library on Friday evening, July 30, and run through August 28.

I decided to make a piece about my troubled departure from New York City (after living there for fourteen years - ten of those in Brooklyn). The new piece is called “Outbound,” and it’s been 30 years in the making.

It wouldn’t be accurate to say, however, that I’ve been actually working all that time on the painting itself. Better to say… it’s been working on me. The piece was originally a slap-dash acrylic self-portrait on a small scrap of unstretched canvas (11 ½” x 13”). It was the last painting I made in 1991, during my final days in Brooklyn -  homeless, jobless, divorced. In debt. And drunk. A few months after painting it, I left Brooklyn at night, a few days before Christmas, on a Greyhound bus – the last bus ride I’ve ever had - bound for my native Ohio, where I have remained ever since.

I never thought of that untitled painting as a “last hurrah”  so much as a last, lurid harumph from a devastated New York dreamer. It seemed to me that nothing in it spoke enough about its generous measure of dark ugliness. In fact I always felt it prodding me through the years to do something more with it, not to make it somehow prettier, but rather to at least paint a hint or two of specific context or point of reference. The painting kept saying only, “You’re not finished with me yet.”

And so for this exhibit, I finally got on board to finish the journey.

Posted by Tom Wachunas at 12:05 PM No comments: