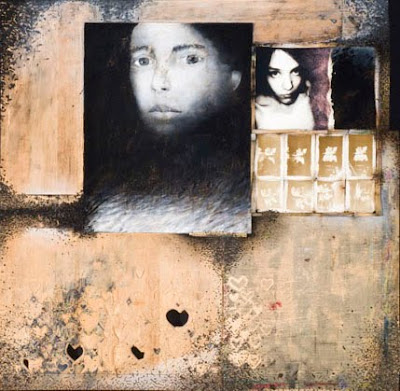 
If there’s such a thing as having the ability to artistically formalize the metaphysics of memory and dreams, Dr. Fredlee Votaw has it. Like some of the titles of Votaw’s works, my scribbled notes on his show of 25 mixed media pieces at The Canton Museum of Art, called “Restless Dreams”, seem like the beginnings of prose poems: inklings of faint certainties; distant, old melodies or memories perceived through vapors of the crowded present. The images here live on the cusp of revelation, the ethereal edge of familiarity, many of them imbued with a sepia patina of old wood, faded linen, tarnished metal.

Aside from Votaw’s astonishing precision as a draftsman, and his uncanny feel for lusciously tactile surfaces (which is all certainly compelling enough), the wonder of these pieces is in their power to evoke. This is to say that in as much as these works represent what Votaw calls a visual diary – something intrinsically personal to him – they’re not so private or obtuse that they can’t evoke connections and associations every bit as personal to us, the viewers. And the essence of those connections and associations is centered in lovingly recollected people, places, and moments, whether joyous and tender, bittersweet, or melancholic.

One of the more intriguing and recurring (and enigmatic) motifs in Votaw’s assemblages are metallic passages he creates with what must be very painstakingly laid-in clusters of tiny nails, as in “Thinking About the Holocaust.” In the top half of the work is a large face - pale, hairless, haunted and haunting, with eyes that seem to peer into and beyond history itself. Beneath the face there is a wreath of sorts, made of intertwined pairs of human hands – some in prayer, some limp, some partially open in pain or supplication. Those tiny nails form a frame, or an aura around the wreath. So many of them! Like a procession gathered ‘round the cruel magnet of human tragedy.

Votaw’s graphite drawings here are utterly stunning in their meticulous, mesmerizing detail and subtle textures, as in “Wedding Ring Quilt Dreams,” or “She Dreamed of the Butterfly Her Soldier Boy Caught for Her.” Yet they aren’t cold and calculated exercises in photorealism. Rather, they seem to have real breath - simply, even magically appearing out of white mists.

The quality of the markings in these and so many other works in this show is such that you get the sense Votaw has not so much ‘drawn’ as somehow coaxed and whispered them on to his surfaces. They’re the kind of whispers that are the soundtracks of dreams, transformed into physical imprints of memories – never too loud or too deep, but always gently steady and quietly urgent.


Photo: “When We Gazed Up at the Night Sky, I Saw the Wonder of the Stars, While She Saw Only the Blackness In-between,” mixed media assemblage by Dr. Fredlee Votaw, on view in his exhibit, “Restless Dreams,” through October 31 at the Canton Museum of Art, 1001 Market Ave. N., Canton, Ohio. For Museum hours and other info, call (330) 453 – 7666 or visit www.cantonart.org
Posted by Tom Wachunas at 1:31 PM

Tom: You have truly captured this show in its true essence.I loved the way you describe the artist as coaxing his pieces into being. That is truly what it looks like. I loved this show and I know he'll love you review!!