In Living Black and White 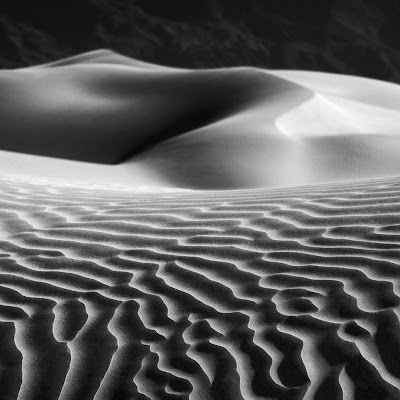 In Living Black and White
By Tom Wachunas

“…everything looks worse in black and white.” - Paul Simon, from “Kodachrome”

“A photograph is a secret about a secret. The more it tells you the less you know.”
- Diane Arbus –

“Life is like a good black and white photograph; there’s black, there’s white, and lots of shades in between.” - Karl Heiner –


Our word “color” comes originally from the Old Latin noun ‘colos’, meaning a covering, related to the verb ‘celare’ - to conceal or to hide. It seems an ironic word meaning, really, when we consider how much power we assign to color in revealing what we think of as particular qualities of the visual world. Certain colors connote warmth, joyous optimism, or fiery passion, while others conjure cold, distant things, loneliness, or isolation. We’ve become accustomed to how the visible spectrum of light resonates with us emotionally. In art, we praise an artist’s mastery of color’s luminosity and intensity, and its capacity to manipulate our perception. In this polychromatic world that can be photographically imitated, translated, and supposedly improved upon via ever more sophisticated digital tinkering, how has the hallowed tradition of black and white photography been faring?

Move over Roy G. Biv and Paul Simon. The world is not necessarily best – and certainly not always – viewed through rainbow lenses. Case in point: the current showing of approximately 40 photographs by Jan Bell in his exhibit called “An Intimate View” at The Joseph Saxton Gallery of Photography.

Yes, there are marvelous color photographs here that, as the show’s title indicates, present intimate, very close-up visions from nature, all of them masterfully crisp and arresting. “Ripples on Water”, for example, with its intricate clusters of tiny white ridges afloat in luscious cerulean wavelets, is startlingly faithful to reality while being a stunning abstraction.

But for truly compelling visions of texture, tonality, and formal drama, Bell’s black and white photographs soar where color would seem to be a distraction. A monochromatic world, as so superbly demonstrated here, is neither boring nor complacent. His images, both from natural and urban settings, are eminently poetic and riveting. Many of them bring to mind the sleek sensuality of Edward Weston’s work, or the powerful visual majesty in the work of Ansel Adams.

Savor the undulating curves and sumptuous wrinkles of sand in “Dune Waves”, or the eerie tactility of “Resting Boulder”. Who knew a rock could speak such depth and mystery, or that grey areas could be so intense? There are myriad secrets in that surface tattooed by eons of geologic change.

Call me unashamedly old school, but sometimes I think our love affair with color can sabotage real, thoughtful seeing. The idea that black and white photography could reveal the deepest essence or spirit of a thing might seem too counter-intuitive, high-flown, and/or obsolete to some viewers and practitioners. Thankfully, this is one show that offers clear, engaging, and beautiful evidence to the contrary.