The Soulful Elegance of Sean Qualls 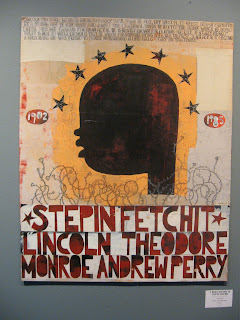 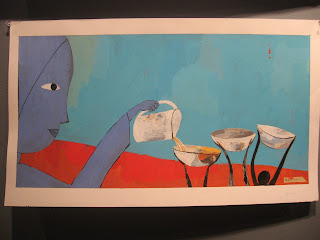 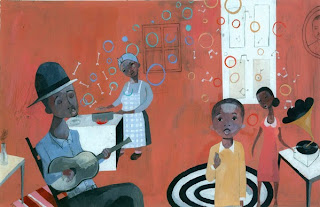 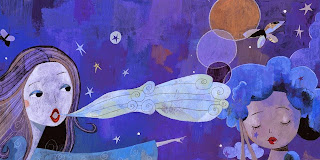 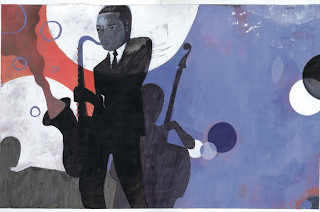 The Soulful Elegance of Sean Qualls


Lest you think the title of this exhibit hints at things too cryptic, two good places to start in appreciating its aesthetic scope (the show is something of a retrospective, actually) are the artist’s web site at www.seanqualls.com and Dan Kane’s excellent Repository article from November 6: http://www.cantonrep.com/article/20141105/ENTERTAINMENT/141109590/10558/ENTERTAINMENT
The world of haute art can be a divisive enough place wherein “illustrators” are still sometimes viewed disparagingly, as if the practice of illustrating is an inferior or insignificant aspiration when compared to “real painting.” I can still remember a college art teacher looking at an ambitious painting by a fellow student who was clearly influenced by Norman Rockwell. With a dismissive wave of his hand, the pompous professor said, “That’s not painting, that’s a magazine cover.” So much for intelligent critique.
Not that the children’s book illustrations by Brooklyn, New York-based artist Sean Qualls should or could be compared to Rockwellian Americana. But make no mistake, Qualls’ mixed media works (mostly combinations of acrylic, collage and pencil on paper) function quite effectively both as tactile illuminations (so ok, illustrations if you insist) of specific narratives (many of them historical in nature) as well as remarkably striking, stand-alone images.
While most of them were made to be pages for books about particular individuals such as great jazz artists John Coltrane and Ella Fitzgerald, others are Qualls’ more personal probings of racial identity. A Brief History of Stepinfetchit, for example, is a potent, earth-toned emblem that asks and answers “what’s in a name?” Indeed, as the adopted moniker of a film actor became synonymous with “lazy negro,” this starkly poetic work transcends stereotypical associations and reveals that Mr. Lincoln Theodore Monroe Andrew Perry was anything but.
In the simply configured Mother Theresa, the ideological focal point of compassionate service to the needy is certainly clear enough and charmingly rendered. Yet the most important points of visual impact in the work are the  red brush marks that appear to float on the right side of the large empty background of grayish blues. These painterly marks might seem isolated, perhaps even accidental. But in fact they’re vital, abstract unifying elements, activating the blue field in a way that ties it to the dominant red horizontal wave at the bottom.
This sort of compositional economy and elegance – an impeccable design sensibility - occurs consistently throughout the exhibit. Pieces such as John at Home and Before John Was a Jazz Giant, with their playful variety of organic and geometric shapes rhythmically harmonized through connecting colors, bring to mind the serenity and balance that the great modernist Henri Matisse achieved with his representations of interior spaces.
Finally, there’s the distinctive palette that Qualls employs. For the most part, his hues are tinted to a low intensity, washing his scenarios with a haunting softness, and reminiscent of the moody color shifts you might encounter in films when the story cuts away from present reality to a character’s memory of a past event or distant place. So while many of Qualls’ images are imbued with an ethereal sense of remembrance, they nonetheless possess a palpable immediacy, and a vitality that makes them feel timeless.


PHOTOS, from top: A Brief History of Stepinfetchit; Mother Theresa; John at Home; Little Cloud Dreaming; Before John Was a Jazz Giant
Posted by Tom Wachunas at 6:53 AM