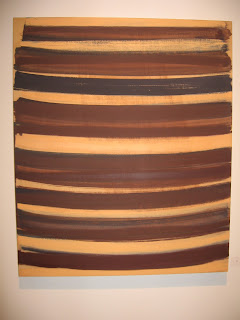 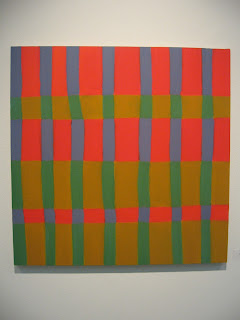 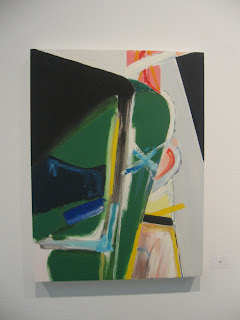 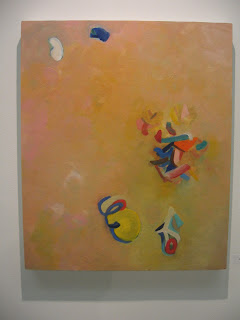 “What I mean by 'abstract' is something which comes to life spontaneously through a gamut of contrasts, plastic at the same time as psychic, and pervades both the picture and the eye of the spectator with conceptions of new and unfamiliar elements...”
- Marc Chagall

“When I see people making 'abstract' painting, I think it's just a dialogue and a dialogue isn't enough. That is to say, there is you painting and this canvas. I think there has to be a third thing; it has to be a trialogue.”  - Philip Guston

In 1960, critic Clement Greenberg wrote in Modernist Painting, “…Flatness, two-dimensionality, was the only condition painting shared with no other art, and so Modernist painting oriented itself to flatness as it did to nothing else.” Accompanying that particular orientation was the Modernists’ hearty embrace of the materiality of paint and the gestural physicality of applying it to the flat surface, which was something that critic Harold Rosenberg had already declared in 1952 (in The American Action Painters) to be “…a gesture of liberation...”

Another significant element in the advancement of abstraction in painting was the advent of Abstract Expressionism and its dismantling of the Old Masters easel tradition. Modernist abstraction of this sort had wholly severed ties to Renaissance ideas (and ideals) of painting as meticulously crafted imitations of the apparent, to create illusionistic windows on physical reality. Modernist canvases became large, immersive environments unto themselves. No longer “pictures” in the traditional sense, these were events of a kind - confluences of gestural expressivity, accident, and pure intuition on a grand scale.

Of course this is not to say that abstract painting must necessarily require larger-than-life scale to achieve a compelling aesthetic impact. Applying  Philip Guston’s observations quoted above, it’s precisely the small scale of the works currently on view at Kent Stark’s Main Hall Gallery that can effectively draw us into an intimate “trialogue” with the painted surface.

I think it’s important to appreciate painterly abstraction in general as a visual language of many dialects, and the four artists here (three working in NYC/Brooklyn, one in Boston) as engaged in dialogue with their own mark-making. Painters as raconteurs. You could consider it a call-and-response dynamic, wherein the act of putting down a brush stroke or a wash of color, or defining a shape, activates the surface and initiates an ongoing process not unlike constructing a written phrase, a sentence, or a paragraph. The artist “reads” the marks and responds (and here’s where the mystique of intuition comes into play) with other marks which could in turn cue the painter in how to proceed further along the picture plane. We viewers are in effect a third party in this conversation – negotiation, really – reading and interpreting what’s before us.

Two of the artists – Emily Berger and Susan Post – have used grid configurations as a compositional foundation for their works. That said, most of Emily Berger’s seven oil paintings here have no drawn verticals as such. Verticality is implied, though, in her stacking of thinly painted, ribbon-like arcs of often transparent, earthy hues that sweep across the surface. There’s a tactile sensibility in the way the paint incorporates the grain of the support – either wood or linen – so that in some ways the paintings have the look of loosely-hung, dyed woven fabrics, or perhaps window blinds through which we see subtle changes in texture and color saturation. Additionally, look closely at how the paint sits on the surface, and notice how at times what appears to be the lighter “background” color can jump forward to become a positive mark on a dark ground.

A similar spatial playfulness with the figure-ground dynamic is at work in Susan Post’s oil paintings. The warp and woof of materiality and light. While the grid format is more overt in her pieces than in Berger’s, the vertical and horizontal elements aren’t actually straight “lines” so much as they’re gently undulating, rhythmic arrangements of soft-edged rectangular bands of alternating hues, seeming to simultaneously advance and recede. There’s often a lyrical sensibility to the repetitive, codified structuring of the picture plane, as if the vertical elements could suggest rows of trees or buildings, while the horizontal movement could signify strips of earth or sky.

The intriguing compositions by Liz Yamin (including works in acrylic/ collage, and oil) and Bosiljka Radista (oils), on the other hand, are distinctly less structurally regulated. Yamin’s can be at once dense and airy in their loose mixing of vaguely familiar and ambiguous forms which can alternately suggest everything from figural and still-life studies to interiors and urban landscapes. Stylistically, while there are both solid and sketchy reminiscences of past Modernist luminaries in Yamin’s pieces (hints of Georges Braque, John Marin, Arthur Dove and Richard Diebenkorn, among others), she has deftly hybridized such influences into a unique vocabulary.

Bosiljka Rodista’s brushy surfaces possess an exquisite sensuality and translucence. Little ghostly clusters of amorphous shapes are still visible beneath layers of glazed color. Other clusters, luminous and strange, remain either uncovered or floating above these sumptuous fields, like so many diacritical marks in a mystical essay.

Probably like many of us, there was a time when I was fairly sure that the only folks who could fully apprehend abstract painting – both as process and product – were themselves abstract painters. But I’ve long since come to appreciate that something of the painter’s personal life and/or physical surrounds, no matter how subtle or masked, will invariably find its way into the visual vocabulary we encounter in a given work. Call it a joining of the psychic with the plastic.

There’s abundant enough material in this show to inspire us to willful seeing. Willful seeing. That in itself is our purposed action, empathetic with the painter’s own act of painting. Despite the modest scale of these pieces, they nonetheless can cause us to experience surprise, to embrace the unexpected, and to be ourselves…enlarged.