“The history of modern art is also the history of the progressive loss of art's audience. Art has increasingly become the concern of the artist and the bafflement of the public.”   - Paul Gauguin


“The object isn’t to make art, it’s to be in that wonderful state which makes art inevitable.” - Robert Henri

To begin, I provide here some useful background info excerpted (italicized here) from the Canton Museum of Art News Release from a few months ago:


“Art and the Animal refers to both the annual exhibition of the Society of Animal Artists, and the traveling exhibition and tour that is generated from it…


…Only the best animal art is selected for Art and the Animal. Consequently, it extremely difficult, and therefore prestigious, for artists to have artwork accepted into the exhibition. Combining natural history and fine art in creative ways, SAA members compete to have their work included in annual exhibitions chosen by a selection jury comprised of SAA members who meet at the Salmagundi Club in New York each Spring…


…The Society of Animal Artists was founded in 1960 by the late Patricia Allen Bott and Guido Borghi, two visionaries who sought to reposition animal art as an important contemporary art form by creating a community of like-minded artists…” 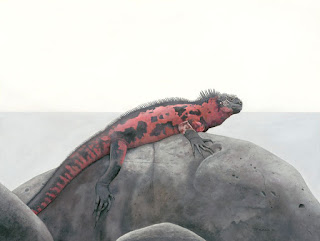 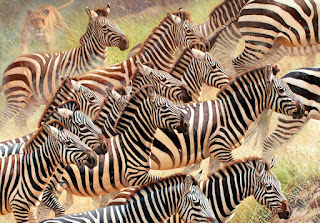 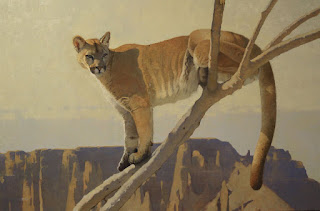 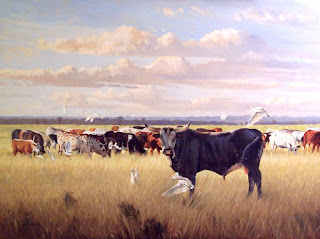 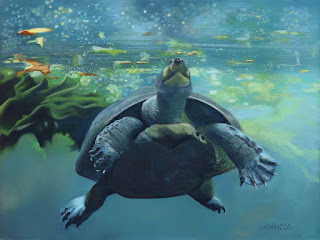 
OK now, onward. I’m not going to be commenting on any specific pieces if only because there are simply too many of equally superb caliber in this exhibit of more than 60 works from world-class wildlife artists. I have no “favorites.” In fact, I was amply overwhelmed at the consistent level of utterly exquisite technique and design sensibilities apparent here in both 2D and 3D works. To be sure, the SAA is one very seriously gifted fellowship of, as stated above, “like-minded” artists. And it’s that “like-minded” reference, along with “…to reposition animal art…” that resonate most deeply with my appreciation of this spectacular show. As it is, my commentary here is largely centered on the art of painting as perceived and appreciated by both those “in the know” as well as by the general viewing public “in the now” of these postmodern times.


For many years I have sung the praises of non-objective, abstract, “painterly” works – their pursuit, both dauntless and daunting, of intuition, spontaneity, improvisation…of inventing the world anew to the point of creating an autonomous reality, true only to itself, it would seem. Vive la differénce.


Yet all along I’ve been acutely aware that this sort of contemporary painting can often be perplexing enough to squelch meaningfulness to many viewers who might be too easily if not wrongly dismissed as unsophisticated, or insensitive to really seeing. I remember feeling both amused and humbled when I saw a Calvin and Hobbes cartoon some years ago, wherein I read, “As my artist statement explains, my work is utterly incomprehensible, therefore full of deep significance.” It’s hilarious in its way, not to mention ironic in how it embodies the elitist philosophy apparent in so much art critique these days – experts floundering in arcane artspeak to “explain” the latest showing of the emperor’s new clothes.


Don’t get me wrong – my respect for, and appreciation of truly compelling non-objective painting remains undiminished. That said, I think it also true that representational art of the sort seen here (call it what you will – Realism, Naturalism, tromp l’oeil, even Hyper-realism) harks to a time and culture where faithful imitation of the natural world was a sufficiently compelling enough metaphor for the nobler aspects of the human condition. I think we’re currently entrenched in a culture that has too quickly marginalized such art, somehow determining it to be merely nostalgic, pleasant or “entertaining,” but impotent. Hence, the SAA and similar entities must necessarily – and courageously – continue to “reposition” themselves in the minds and hearts of all those dedicated to savoring truly great art.


If Modernism opened a Pandora’s Box of stylistic and philosophic variances in painting, Postmodernism has served to further advance both the best and the most eccentric, ridiculous, and aberrant of those variances. Vive la differénce, but how much, and for how long? This is certainly not to say there’s no place for non-objective expression, only that history will find a way to sort out and prioritize the vagaries of trending cultural tastes.


Meanwhile I’m nonetheless hopeful, even confident, that when representational art rises to the level of visual sublimity we see in this particular exhibition, it rightly remains a timeless, relevant and necessary witness to the ineffable beauty of the natural world.


Can what was old be made new again? Vive la révolution.