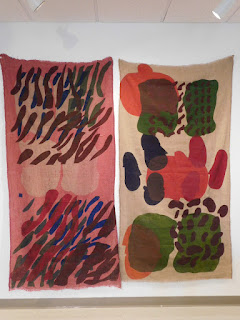 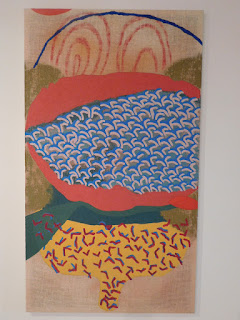 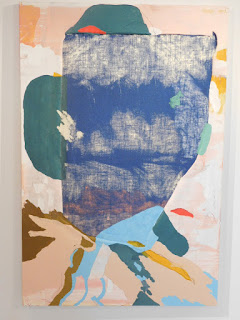 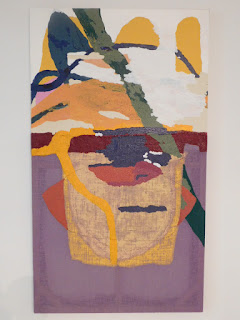 “My artistic practice began as a reaction to an alien environment. I was born in New Delhi, but was brought to the States for a better future. The essence of my work lies in my need to resolve the often- conflicting aspects of my hybrid identity. The way in which I navigate the social, cultural, and spiritual sphere of my life rely deeply on the need to both assert myself as an individual and as part of a community…My artistic explorations exist between two and three dimensions, and deconstruct abstraction by uncovering layers of uncertainty, may it be personal, compositional, or material.”
- Kaveri Raina

My apologies for this late posting, as there are only a few days left to view this exhibit. But it is yet more significant evidence for appreciating Kent Stark’s Main Hall Art Gallery. The exhibits here – very often by artists outside our immediate region - are simply in a class by themselves. And frankly, it’s the only gallery in all of Stark County that consistently makes me feel connected with the cosmopolitan energy, scope, and yes, challenges, of contemporary aesthetic visions one can regularly encounter in places where a more matured and embedded gallery culture can be found.

Speaking of embedded, the paint, or dyes, in Kaveri Raina’s seven large, highly tactile abstract works don’t just sit atop a primed surface. They often  saturate, soak, and otherwise bleed through it. The pigments themselves seem to have become expressions of a spirituality - memories of, or desires for, connecting to a longed-for ground.

Additionally, the raw materiality of burlap that Raina employs in these paintings is loaded with cultural associations: the modest stuff of a tough life, a sack cloth wardrobe, the crude luggage of the poor. With its woven structure at once solid and porous, it allows for both opaque and transparent forms (suggesting people, places, or things) to coexist on, and in, the same plane. Sometimes it seems that the paint we see is coming through from the back side of the surface. A duality, an inside-out dynamic. There’s a beautifully poetic tension between something hidden and something revealed, between something implied and something apparent .

With these thoroughly intriguing visions, Raina asks us, “Will I be missed?” Missed where, and by whom? Will her native heritage be acknowledged and  remembered as a discrete, valuable history? Will its unique flavor be completely lost, forever diluted in the multicultural soup called America? Indeed, as she puts it in the excerpted statement above, she’s seeking resolution of conflicting elements in her “hybrid identity.”

In the end, I found Raina’s question to be more alluring than foreboding. In her art, it is a question neither casually whispered nor even spoken, but rather boldly sung.