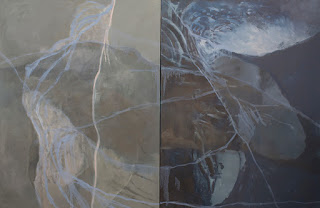 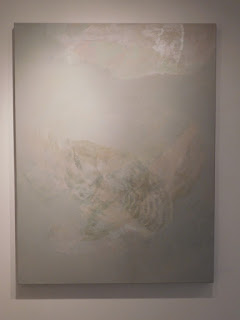 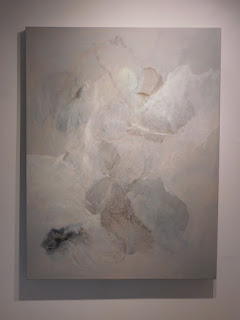 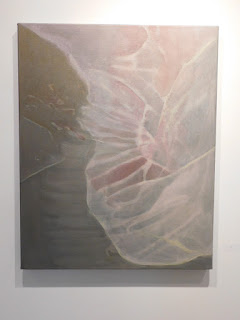 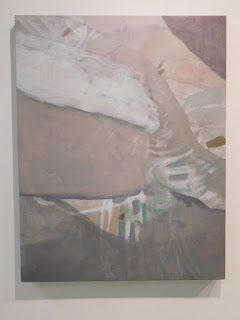 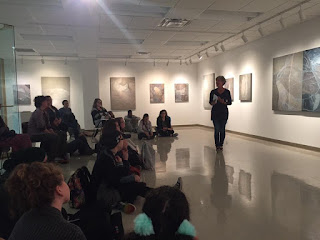 “To a nonpainter, oil paint is uninteresting and faintly unpleasant. To a painter, it is the life's blood: a substance so utterly entrancing, infuriating, and ravishingly beautiful that it makes it worthwhile to go back into the studio every morning, year after year, for an entire lifetime.” – James Elkins

“The secrets of alchemy exist to transform mortals from a state of suffering and ignorance to a state of enlightenment and bliss.”
― Deepak Chopra
EXHIBIT: in the whisper of silence / paintings by Mona Brody, on view THROUGH OCTOBER 27, 2017, at Main Hall Art Gallery, Kent State University at Stark, 6000 Frank Avenue NW, North Canton, Ohio / viewing hours Monday-Friday, Noon-5 P.M.

http://www.monabrody.com/
Early in her gallery talk at Main Hall Art Gallery on October 6, visiting painter Mona Brody - currently Professor of Art at Pratt Institute in Brooklyn, New York - described her methodology. Several times she used the term alchemy in an overarching way. It’s a wonderfully loaded term in this context, useful as both a practical and philosophical descriptor. Without traveling too far into painting arcana, suffice it to say that Brody is an alchemist extraordinaire.

Start with regarding alchemy in the sense of transmuting common, ordinary materials into uncommon ones, or a process of changing one thing into another. Here I’m not talking about using paint to make merely prosaic illusions of plastic realities. Yes, there are certainly indications of terrestrial or celestial metaphors to be seen in Brody’s paintings, such as animal forms and aerial views of landscapes, or volatile skies. But in her process of altering pigments and oil to transport us beyond their innate materiality, Brody constructs altogether discrete sensory experiences, independent of recognizable nature, and stunning on their own terms.

In considering alchemy as it might be applied to making abstract imagery, think of it as the practice of reconciling dualities or opposites: temporality and timelessness; permanence and ephemerality; the apparent and the implied; the literal and the metaphorical. Brody’s paintings are on one level really about the paint and, paradoxically enough, the paint transcending its paint-ness in the same way poetry employs words.

The linear elements in such works as the magnificent diptych, “Keep Out,” might be seen as bleeding, or crying, or simply an overflowing, like rivulets  of emotive energy. They’re a drawing out, which is to say an identification, memory, or preservation of pathways - an intuitive sort of cartography to navigate through all those surrounding organic forms. Some of those forms  are in turn indeterminate, cloudy and vaporous, while others are relatively more substantive and defined.

As in many of the other paintings here (15 in all), these amorphous structures bloom toward us and also fade away simultaneously, all the while hovering or perhaps incubating, as if waiting in our present moment. The intimate scrutiny that they invite reveals a subtly mesmerizing depth of entities both veiled and exposed – a layered history of gestures and responses, of diaphanous things emerging and changing, or hiding in plain sight.

Throughout her paintings, Brody has incorporated a product called “interference paint.” This remarkable product’s name seems somewhat antithetical to its purpose of causing certain colors to change right before your eyes - with varying degrees of opalescence, iridescence, or otherwise translucent shimmering - depending on your proximity and viewing angle to the work. Maybe it should be called something more relevant to its effect, such as ‘augmentation paint’ or ‘enhancement paint.’  In any case, there’s often the delightfully uncanny sense that parts of the canvas surfaces are being illuminated from the inside. Brody uses the effect judiciously.  It’s most apparent in those hints of warmer and more verdant colors, or little flashes of metallic accents, that seem to lurk underneath a palette dominated by off-whites, muted greys, browns, and intermediate earth tones.

So as the title of this exhibit tells us, Brody is not shouting. The sensations evoked here are not exclaimed via hyperbolic hues or heavy impasto, but uttered, even sung, quietly. Gazing at all the paintings, especially “Keep Out,” I went in. And what I heard when I got there was the exquisite sound of my looking. That’s alchemy.