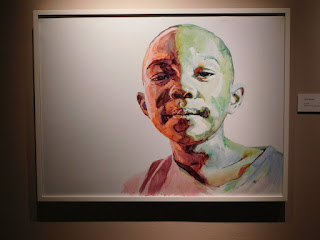 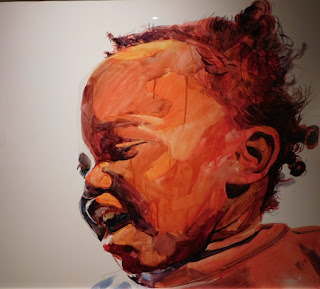 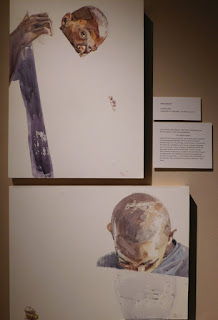 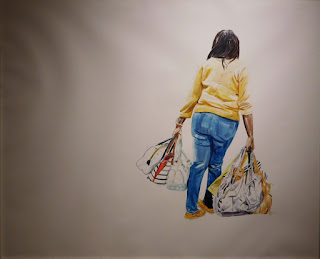 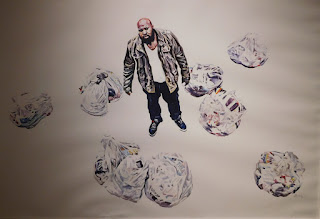 “ …It is remarkable the type of weight people have to carry with them. This thinking allows me to examine my own baggage and ask questions to others. So, how would carrying your personal baggage look?”  - Darius Steward

“I feel most colored when I am thrown against a sharp white background.”  - Zora Neale Hurston

Among the many compelling aspects of the watercolor paintings by Cleveland artist Darius Steward is the scarcity of overall mark-making throughout the picture plane. The sheer starkness of the figure-ground dynamic makes these pictures feel somewhat empty. But that initial, fleeting sensation, induced by an apparent deficiency of an illustrative background, gives way to a more purposeful incompleteness. There’s eloquence in the emptiness here, a meaning to the unfinishedness. Sometimes what’s not specifically described can be an impactful narrative in itself.

Steward writes in his statement that, “Life, life would have to be my biggest inspiration…I want (my art) to talk about hope, progress, and things that can come…and what’s happening today.” In this paucity of overall visual context (these paintings aren’t elaborate “scenes” in the traditional sense), gravity hasn’t fully taken hold yet. The figures and faces from Steward’s family and urban community life - seemingly afloat in vast, nondescript white spaces - have the look of individuals who are not only present and immediate, but also still… becoming.

You might think of them as on their way to an unseen or undetermined destination. There’s a soulful probity in the way these individuals are presented, as if they’re still in the process of being constructed on a field of potentiality, alive in the milieu of possibility.

In one series of four portraits of Steward’s children, each painting is titled with a single alphabet letter. The whole sequence spells out “MORE”, with an additional portrait having a literal question mark as its title, all implying the daunting uncertainties about what the future might hold for these children. Two other paintings under the title of “Venting” are of boys holding blank signs – messages not yet written or received, stories not yet told, lives in waiting.

Another series of three paintings is a poignant remembrance of Steward’s late mother. In “Grin and Bear It, Part 2” she stands, or walks, with her back to us, weighted down with each hand clutching a bunch of handbags -  symbols of all she held to be precious in life, and the heavy responsibility she carried in selfless nurturing of her children. In “My Inheritance,” an especially arresting self-portrait, Steward clearly identifies with that responsibility. He’s surrounded by the bags holding what his mother possessed. He stands, looking up at us, or at the task laying before him, perhaps- that of carrying on his mother’s legacy.

Steward’s watercolors aren’t painted on conventional watercolor paper, which can tend to soak up pigments in a way similar to how fabric absorbs dyes. His paintings are on Yupo paper - a matte-smooth, bright white, waterproof and pulp-free synthetic material. Consequently, these painterly configurations appear to sit on top of and remain separated from the support material. The surface effect is striking. Every fluid stroke of the brush, every push or pull of color, tenuous or bold, retains its watery, translucent character, giving the painted forms a somewhat reflective patina that enhances the luminosity of their hues.

Interestingly, that luminosity is the result of a compositional reversal of sorts. All that featureless expanse of white background in these paintings ceases to be merely a “negative space” or a silent surround. It becomes instead a showing through, a discrete entity, itself a metaphorical figure which can dwell to varying degrees inside the human figures we see.

Here, white is neither a color nor a void, but a light. Indeed, an act of hope.