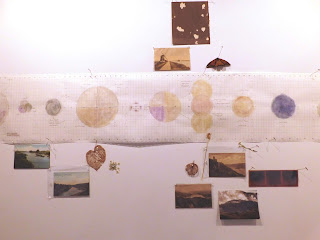 “…Overall, I equate my process as one akin to meditation rather than image making or craft. Repetition is employed to mark time’s passing, and with it I build elaborate surfaces covered with minute hand embellishment.  In this private, performative act of making I became a witness and a recorder.”  - Danielle Rante

Hanging on the walls in one corner of the gallery – an alcove, of sorts, tucked away from the six large works on paper featured this exhibit – is a horizontal stretch of unrolled graph paper marked with words, numbers, and colored sketches of circles. Loosely pinned just above and below is an array of small photos of terrains from around the world, along with various dried botanical specimens.

This seemingly impromptu arrangement suggests a travel log, a navigational chart, or maybe a bulletin-board journal of geographical sites visited and explored. As such, the display is an inviting portal to appreciating the conceptual essence Danielle Rante’s works on paper.

Double Visions indeed, these thoughtfully wrought pieces show Rante to be an inquisitive voyager who transforms the material nature of a place or surface into a poetic contemplation. Her colored pencil drawings are hypnotic compositions, at once atmospheric and architectural, straddling the material and the ethereal, and replete with delicate detail and exquisite ornamentality.  Even more striking are her cyanotypes. To look at them is to be drawn into gorgeous, undulating cyan fields to encounter sublime empyreal dramas, where tiny earthbound floral and organic forms take on a galactic dimensionality. Like star maps.

The cyanotype process (from the Greek word cyan, meaning “dark blue substance”) was invented by the British scientist, Sir John Herschel, in 1842. Not requiring a conventional darkroom or camera per se, images were produced by placing objects directly on to photosensitive (chemically treated) paper and exposing it to light to make what were then called “photograms.” The process was soon used to make architectural documents which we know as blueprints. Interestingly, the botanist Anna Atkins, considered to be the first female photographer, used the process to make an album of collected algae specimens in 1843.

The notion of collecting, examining, and savoring, both scientifically and aesthetically, is a resonant presence in Rante’s cyanotypes. These configurations are made up of multiple, identically-scaled units of paper, arranged in a way that brings to mind the ground grids typically constructed for meticulous archaeological excavations. In Rante’s explorations, the terrestrial merges with the celestial. Our act of seeing becomes itself a spiritual exercise, a meditation. Site becomes mesmerizing sight.