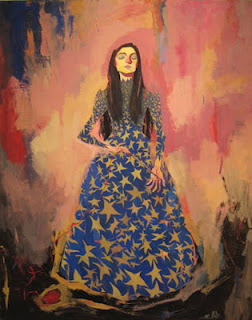 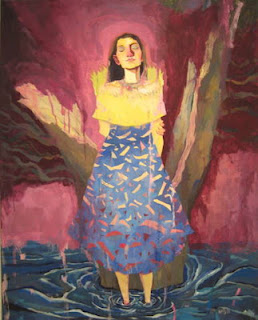 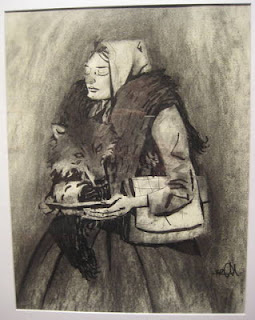 “…I attempt to breathe new life into the fairy tales, myths and literary classics of my youth…My thought was to simplify each into a single narrative portrait of the protagonist with ornaments gathered from her journey…”  - excerpted from Rich Pellegrino’s artist statement for “Resuscitatorum” -

For his recent body of work now on view at Translations Art Gallery, Rhode Island painter/illustrator Rich Pellegrino set about revisiting some European fairy tales, Shakespeare, and the Bible to produce his acrylic gouache portraits of iconic female characters. Hence the show’s title is “Resuscitatorum” –  Latin for refresh or reinvigorate.

Ironically enough, what Pellegrino brings to his subjects isn’t all that ‘refreshing’ or ‘reinvigorating’ in terms of injecting them with any really enlivening or surprising truths.  It’s not like these legendary figures haven’t been re-examined or re-invented before. But his readings do offer a raw, ruminative immediacy through his arresting, painterly energy - one that is considerably less pristine than (though every bit as intensely colorful as) the renderings we traditionally encounter in Disney-style animations. These are decidedly “edgy” paintings.

Their edginess can be seen as conceptual, as in how the artist interprets his characters’ meanings. Are these images just quirkily styled recapitulations of dusty old stories, or still relevant metaphors for real-world life? For those who want to re-familiarize themselves with the original narratives (when’s the last time you read Hamlet or The Tempest, for example?), typed synopses are posted next to each painting. But that’s not the subject of this missive. I’m more drawn to, and simultaneously intrigued and perplexed by, the edginess of their visual aesthetic.

In that regard, there are two (maybe three, if you consider physical surface quality) contrasted modalities at work in each of these paintings. One is the language of illustrative drawing – the kinds of commercial styles you’d encounter in comic books, graphic novels, or animated movies. Pellegrino’s figures and faces seem for the most part to be based on the same model. Their hands are distinctly bony, their mask-like faces broken down into little wedges or planes of color, their noses curiously prominent in their swollen pinkness. They all appear to be sleeping, in most cases quite contentedly, though one could reasonably interpret the closed eyes as serene death. So it’s an eyes-wide-shut sort of thing, perhaps. Are they meditating on their circumstances, savoring where and what they are in time and place?

This brings up the second modality being articulated here – the language of abstraction. All of the figures, representational but certainly not naturalistic in a conventional sense, are painted against backgrounds of layered, brushy splotches of saturated color, often with relatively minimal real world “scenery.”  As visual compositions go, the paintings do hold together as a result of Pellegrino’s very sharp engineering of juxtaposed color relationships and distributions into patterns both decisively frenetic and charmingly organized. Another unifying element is the consistently matte, chalky surface he achieves with his medium.

With rarely a developed illusion of deep space, these are utterly two-dimensional pictorial experiences. The figures don’t quietly emerge from the color fields so much as they boldly co-exist with them. Yet in that sense, for all their central placement in the picture, they tend to play something of an ornamental rather than intrinsically dramatic role. Arguably, it’s in the black and white studies that accompany the paintings where there is a more isolated if not compelling focus on the characters as emotive or “real” entities.

In the end, there’s a subtle air of irresolution about the paintings – an uncomfortable attention to tension. And that might well be intentional on Pellegrino’s part. These storied women are at once euphoric and dysphoric. And encountering them is not too unlike tasting fruit at once invitingly sweet and terribly pungent.