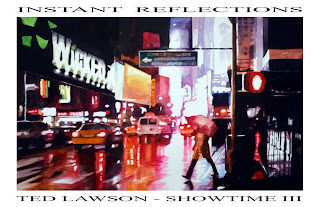 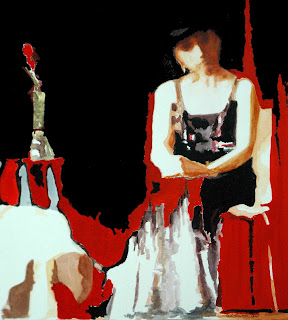 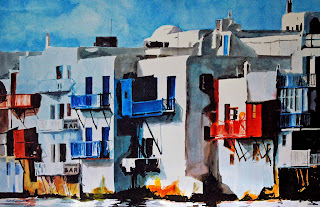 And Then Again…
By Tom Wachunas

As long as I have your attention, I respectfully request some homework from you. Since it’s apparent you don’t mind messing around with reading blogs too much, before you go any further with this entry, please scroll down the page to the Archives section on the right side of this page and click into the 2011 posts, find the December 15 entry titled “Liquid Urban Light,” and read it. As always, thanks.

Ted Lawson easily ranks among this region’s most accomplished and compelling watercolorists. Period. And if you missed his show which was on view at the Canton Museum of Art (CMA) from December 2011 to March 2012, do yourself a great service by seeing his current show at North Canton’s Little Art Gallery, which will be up until July 14. Period. There, I’m done saying what needs to be said about Ted Lawson. I believe I’ve more than adequately met my quota of Lawson lauds (which are richly deserved).

Nahhh, not exactly. See, I was greatly conflicted about commenting at all on this current showing only because it comes so closely on the heels of the CMA show. Something told me that Mr. Lawson would have no really new breakthroughs or big changes in his work that would warrant any substantially fresh comments beyond the December post you just kindly reviewed. Turns out I was right, but only to a limited extent. Without getting into the dicey business of discussing the pros and cons of over-exposure, I do think artists on the local exhibition circuit need to be judicious in how often they make a habit of showing what amounts to be essentially the same stuff.

HOWEVER, at first glance, that only seems to be the case with this latest Lawson offering.  What makes this beautifully mounted collection of 22 works something other than just a reprise of recently familiar work, and very worth visiting, is its mini-retrospective scope, presenting works dating from 2007 and up through five pieces from this year. It’s a delightfully revelatory reminder that Lawson’s prolific output has strongly embraced considerably more subjects and stylistic variations than his recurring, signature Manhattan cityscapes (which largely comprised his CMA exhibit) would indicate. In a sense, what was ‘old’ has a new resonance here, and still holds up as significantly fresh.

Part of this renewed impact comes in noticing how Lawson can imbue his representational scenery with a purely abstract sensibility, in varying degrees. And I think much of that sensibility, in turn, rises from his consistently effective employment of all- white areas and shapes. He uses the white not only for climactic moments of wonderfully effulgent light, but also for establishing a wholly exciting rhythmic element that makes his pictures dance.

In his 2012 painting, “Showtime III,” it’s not the puddled hot colors of Broadway traffic and neon that make the city on a rainy night so spectacular. It’s rather the mesmerizing lambency, the bold lustre of white. Lawson continues to be wickedly playful. Period.