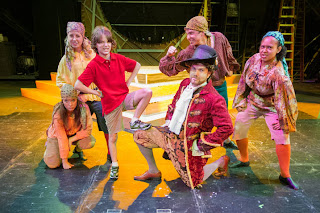 A Seeworthy Dream
By Tom Wachunas

Nary a dull moment goes by in the electrifying new musical revue, directed and choreographed by Michael Lawrence Akers, that concludes this season’s mainstage offerings at Canton’s Players Guild Theatre. Performed by a vivacious cast of 20 (adults and children) and a superb 14-piece live orchestra, “Wishes…Just a Dream Away” is a brisk, joyously family-friendly compilation of 22 songs, gleaned from various movies and live musicals, that impresses on every level. That would include the imaginative incorporation of mesmerizing video imagery directed by James Waters II, and delightfully spectacular costumes by Susie Smith and Kathryn Finn.

The production was co-created by Players Guild Artistic Director Joshua Erichsen, who also designed the scenery, and Steve Parsons, who directed and arranged the music. Joining them in stage development for this ambitious project were director Akers, and Carrie Alexander Spina.

This is not a spoken, structured narrative, but rather the sung dream- voyage of a lonely boy with a vivid imagination. In songs from “Suessical,” “The Little Mermaid,” “Beauty and the Beast,” “The Lion King,” and “Toy Story 2,” to name only some, he encounters a pirate captain and his crew, a mermaid, an admiral, a villain, and a princess. As the boy, 11 year-old Drake Spina is nothing short of endearing in his wide-eyed wonderment, convincingly bemused by, and amused at, the proceedings transpiring around him. His singing is, understandably enough, often colored with boyish urgency. He’s disarmingly tender, crisp and sincere, particularly in his duet with the princess, played by Courtney Vignos-Rininger, in “Somewhere Out There” from “An American Tail”.  Rininger, a sweetly commanding singer, is equally moving in her performance of “A Change In Me,” from “Beauty and the Beast.”

Amanda Medley, as the mermaid, is utterly riveting as she brings magical, soaring emotionality to the powerful ballads “Part of Your World” from “The Little Mermaid” and “When He Loved Me” from “Toy Story 2.” Kathy Boyd, in her character of the Admiral, is sassy and sultry in a thoroughly jazzed, percussive version of “Consider Yourself” from “Oliver!” Late in the second act she has all the infectious vigor of a fired-up gospel singer as she belts out “Dig a Little Deeper” from “The Princess and the Frog.”

A veteran of Carnation City Players in Alliance, Matthew Horning, the Pirate Captain, sings with marvelously subtle authority. His silken tonal control and sometimes understated stage manner serve quite effectively here to imbue all his songs with palpable warmth.

Worth the price of admission is the hilarious and raucous show-stopper “Under the Sea” from “The Little Mermaid.” Horning, sporting red lobster headgear and sounding like he was born in Trinidad, leads the cast, all costumed in fantastical sea garb, as they cavort calypso style around a bedazzled Drake Spina. From high above the audience, sprays of sparkling bubbles descend and hover in the air to complete a jovial dance through the deep. Like so much of this show, it’s an enthralling immersion in aural and visual effervescence.