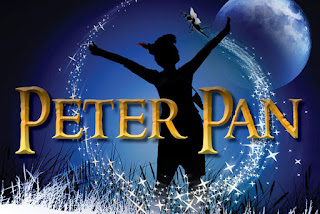 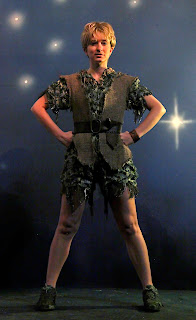 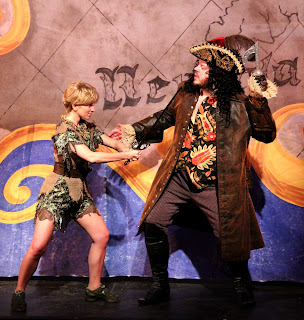 Panning for Gold
By Tom Wachunas

In the song, Never Never Land, a wistful Peter Pan intones, “You’ll have a treasure if you stay there/ More precious far than gold.” The 2008 production of the musical Peter Pan by the Canton Players Guild Theatre (which has, for many years, consistently lived up to its motto, “your ticket to Broadway in your backyard!”) was indeed a dazzling theatrical treasure. So how does the current return visit to Neverland stack up?

Opening night had the feel of a full-out dress rehearsal with a few production issues. But the technical glitches didn’t usurp the show’s overall appeal, beautifully enhanced here by Susie I. Smith’s costume designs and scenic design by Joshua Erichsen.

I take my cues from the looks of wide-eyed wonder on the faces of my grandchildren who were clearly entranced by the iconic story, beginning to end. At the point when Peter Pan stood at the foot of the stage and pleaded with the audience to clap their hands to save his poisoned Tinkerbell (inventively “played” by a darting squiggle of green light), my grandkids, like the rest of the children in the house, squealed excitedly. They inspired me to not grouse too much about problems that I’m sure crew and cast can resolve for future performances.

The cast, directed by Craig Joseph, is a vivacious and sturdy group of performers/singers – the Darling family (including the infectiously energetic Gabe Scott as younger brother, Michael), pirates, Indians (including Sarah Karam as the remarkably supple Tiger Lily) and The Lost Boys. For the most part they stand up quite well to the demanding paces set by choreographer Michael Lawrence Akers. His movement design is an impressive blend of airy grace with strong, earthbound rhythms. All of it is successfully entwined with the high- spirited live orchestra conducted by Steve Parsons, particularly in the show-stopping Ugg-A-Wugg song at the top of the second act - a gem of wild, percussive precision.

In his dual roles of the Darling family patriarch and Captain Hook, Adam Ford cuts a striking enough figure. As Hook, Ford delivers many comedic moments, including his hilarious cavorting in Tarantella and Hook’s Waltz, and his Laurel and Hardy-type antics with the gullible, bumbling first mate, Smee, played to the hilt by the endearing Andrew Knode.

Here, though, is where the grown-up in me (the one who likes to grapple with the darker side of the human psyche) gets the upper hand. The character of Hook is a deliciously complicated one. Yes, he’s malicious and conniving and vengeful. He’s also an inveterate coward, insecure in his own boots, and a vainglorious fop. A megalomaniac with an inferiority complex. This is dense emotional territory and arguably too thick to be navigated by children. Still, I longed to see Hook’s inner tensions played out in a more convincing manner. As it is, Ford’s portrayal is not too threatening - more an entertaining cartoon than a convincing portrait of a conflicted leader.

Pan’s character is similarly conflicted, though for other reasons. He’s an orphaned, insufferably prideful imp, carefree on the outside, brooding on the inside, who thinks kisses are trinkets to be traded and females are for spring cleaning. Adulthood is a horrific plague to him, but there’s also real, selfless heroism alive in his damaged heart.

Amanda Medley reprises her role of Peter Pan from the 2008 production. Once again she delivers a genuinely credible performance made all the more fiery by her wondrously piquant singing and acting. Her considerable giftedness is evident in not only the show’s more ebullient and raucous songs (I’ve Gotta Crow and I Won’t Grow Up), but also in quieter, more reflective moments, such as the lullaby, Distant Melody. It’s a tender, bittersweet duet with Natalie Welch, who is herself authentically charming in the role of Wendy Darling. Poignancy personified.

There’s much that glitters about this show. But in the end it’s Amanda Medley who strikes the mother lode, as it were. Her impassioned understanding of her character’s complexity gives this evening of theatre an aura which is truly golden.