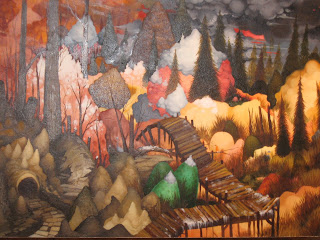 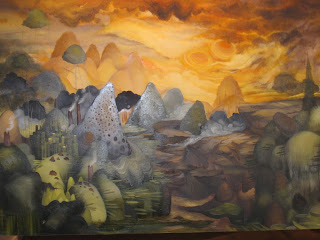 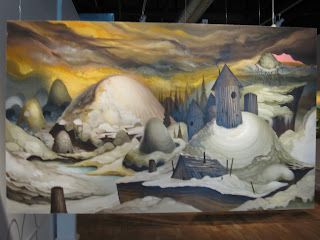 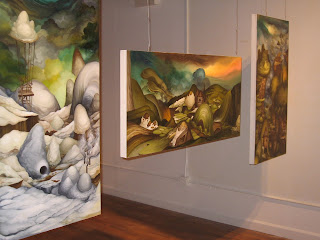 In the past, the scenic content of Steve Ehret’s paintings was that of a fantastical, surreal world typified by bizarre landscapes wherein bonhomie and malevolence seem to coexist. It is a world where bug-eyed biomorphs reign supreme as they mingle (and occasionally collide) with other beings both goofy and goulish. While these characters could elicit our laughter at their theatrics, they could just as often conjure nightmares.

In this new crop of 12 very imaginative oil landscapes on wood panels, however, there’s not a monster to be found. Nor, for that matter, are there any beings, benevolent or otherwise, who might be identified as residents of the otherworldly panoramas Ehret depicts here.

But as the title of the show implies, there’s plenty of evidence that some sort of population lives in and interacts with these environs. Beyond their occasional evocations of Tolkien’s Middle-earth, these locales have a history of their own. Titles of the paintings, such as Franklin’s Cave During Autumn, or Stew’s Landing, or Blue Ridge, Years After the Landslide, give us the sense that we are traveling in an ongoing narrative.

Greatly enhancing this sensibility is the inventive presentation of the work. The paintings are suspended from the ceiling. We don’t simply look at them in the traditionally linear way so much as visit, walking through and among them. The experience is somewhat cinematic. It’s all a wholly engaged unfolding, a magical tour of changing seasons, variable light and atmospheres, shifting geographies and whimsical architectures.

Ehret’s technical style of fantasy naturalism isn’t overly fussy or obsessively detailed. Unburdened by picayune concerns of hyper realism or trompe l’oeil illusionism, the paintings are nonetheless convincing images of enchanting realities. These are, after all, paintings, and Ehret lets us know as much with facile, fluid brushwork that infuses his surfaces with a remarkable lyricism.

Exciting travel plans and vacation getaways have always been a commonly encountered subject in my summertime conversations. But personal “vacation” and “travel” in that context have been absent from my vocabulary for… years. Still, this year I’m quite content to savor an adventuresome visit to the mind of Steve Ehret.

PHOTOS (from top): Franklin’s Cave During Autumn; Islands Of Del Mar; Snowed In At Blue Hen; installation detail
Posted by Tom Wachunas at 8:16 AM