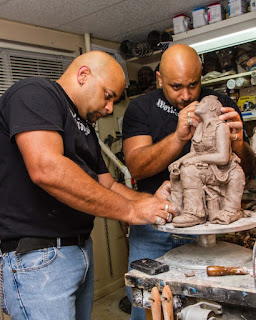 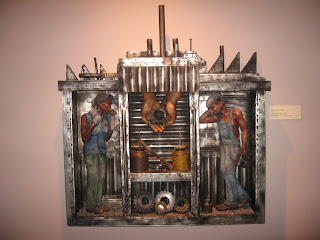 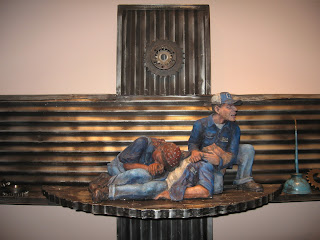 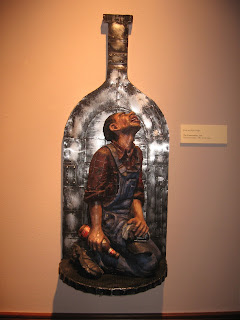 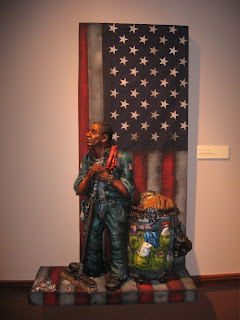 “…A working class hero is something to be…”  - John Lennon

BACKGROUND, excerpted from the Canton Museum of Art web site:
“Identical twin brothers, Kelly and Kyle Phelps, present Blue Collar, an exhibition of expressive ceramic sculptures. Much of the twins' work is about the working-class and the everyday struggles of the common man and woman. The twins grew up in a blue collar environment in Indiana where they were inspired by family members and friends who worked in various manufacturing plants, steel mills, and foundries. These everyday people became working class heroes that have inspired over a decade of working class art…”

Here is a gathering of stunning collaborative works that have cut into my consciousness with an especially spiritual intensity. They conjure an often discomfiting simultaneity of emotions, at once reverential and mournful.

With masterful craftsmanship, the Phelps brothers bring a gritty elegance to the expressive realism of their painted figures (clay/resin casts). Their high-relief sculptures are riveting (pun intended) conveyances of dignity and degradation, ascent and descent, heroism and haplessness, in the working-class culture. It’s a culture now too often distilled in our memories into impotent visions of vast Midwestern tracts littered with abandoned mills, factories and foundries. The artists have also effectively enhanced the context of their dramatic figures by incorporating found industrial remnants such as gears, tools, and corrugated metal.

The recurring iconographic references to Christ’s passion and death raise some intriguing questions, both socioeconomic/political and theological in nature, as if to equate the depicted laborers and their plights with, understandably enough, martyrdom. Real, searing pathos comes through loud and clear in “Blue Collar Crucifix” – an industrial-age Pietà to be sure.

Yet where’s the promise of ultimate renewal? In the piece called “After The Dream,” for example, against the backdrop of a grease-stained American flag, a janitor is sweeping up a pile of Obama campaign handbills emblazoned with the words ‘Hope’ and ‘Change,’ while in the trash barrel next to him we see a crumpled picture of Jesus. And in the piece called “The Communion,” the woeful figure clutching a bottle of Bud is clearly communing with the wrong remedy.

Is there a remedy, then? The overall design of the sculptures is consistently suggestive of religious votive shrines, and rightly so, it seems to me. But these shrines require no ritualized lighting of actual candles, for it’s a powerful, ideological fire that illuminates their heart and our consciousness. In that, you might consider this exhibit as a prayerful plea for reclamation and redemption. And in their commendable labors to remember and pay homage to the blue collar milieu with such compelling renderings as these, the Phelps brothers have accomplished something urgently relevant and heroic in its own right.

PHOTOS, from top: Kelly and Kyle Phelps at work; The Workers Altar; Blue Collar Crucifix (detail); The Communion; After The Dream
Posted by Tom Wachunas at 12:09 PM