"To Everything There Is A Season..."

“To Everything There Is A Season…” 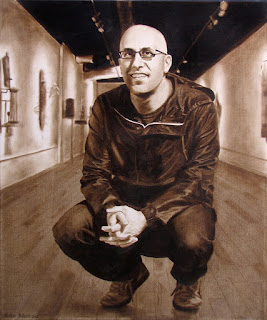 File this one under ‘Thank You.’ One thing I didn’t mention in my last post was that the Doreen St. John show at Cyrus Custom Framing and Art Gallery (you still have until Jan. 30 to see it) is the final exhibit we’ll see under the name “Translations,” – originally a brick-and-mortar gallery in the heart of Canton’s Arts District before it went mobile. TRANSLATIONS was Craig Joseph’s remarkably vital contribution to the Canton cultural ethos of the past several years (that’s him pictured above in a portrait by Heather Bullach).
I don’t think he’d mind my sharing with you the following communication (which I’ve edited only slightly) that he released on November 2, 2015:
“… It has been a wonderful 6 years - both in the space downtown and in the last year of pop-up exhibits all over Stark County. I have enjoyed what I've had the opportunity to do, the people with whom I've been able to collaborate, and the art we've produced…
BUT ... after 7 plays and 15 exhibits in just a year's time, I need a break, and the easiest way to lessen the grind is to remove the "one exhibit (or more) a month" tenet from my life. That's what TRANSLATIONS has been about since January 2010, and so it’s time to put TRANSLATIONS to bed.
Will I still direct theatre? Will I still curate exhibits? Absolutely. But it'll just take a different form from here on out. And it'll just happen without the TRANSLATIONS' name and tradition attached to it.  After I take some time to lay on the couch, read, travel, refresh, have a social life, and come up with some new visions. Which I hope you'll check out when they occur.
Until then,… my inarticulatable gratitude for what all of you - artists and patrons alike - have given me the privilege of doing over the last six years. I look forward to the next adventure together.”
Craig’s breadth of vision and curatorial acumen never ceased to astonish and inspire me, and I’ll truly miss the uniquely engaging concepts and excellent content that TRANSLATIONS so consistently gifted to us -  provocative and entertaining in the deepest sense of those words. My bittersweet sentiments are those of a hooked reader, at once saddened by finishing an enthralling book, wishing the adventure wouldn’t end, yet anxiously anticipating the next one.
So if I’m glum, it’s only because I long for more “authors” like Craig Joseph to continue nourishing the Canton arts milieu. No doubt he will in his way and his time.  In that, I offer both my thanks for past adventures and ardent prayers for the success of his future journeys.
Meanwhile, maybe this isn’t the end of a marvelous story after all. Hopefully, it’s simply the closing of one chapter in a story still being written.
Posted by Tom Wachunas at 8:29 AM