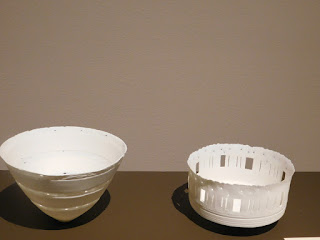 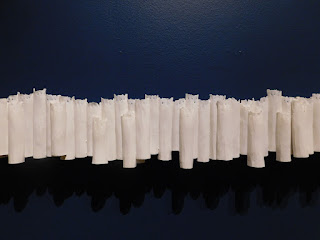 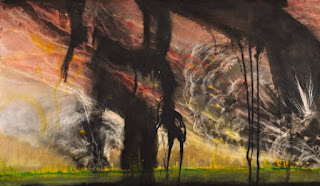 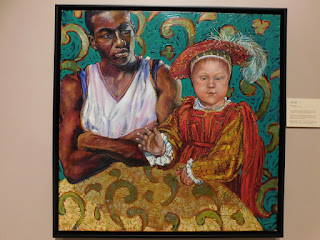 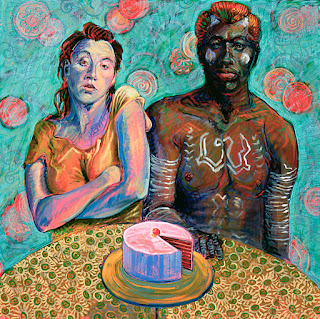 “People are the blooms and treasure of a culture. We all bask in the same light…”  - artist Leslie Shiels

From Webster’s New Universal Unabridged Dictionary:
CONVERSATION : noun, con·ver·sa·tion /kän-vər-ˈsā-shən
knowledge or familiarity based on study or use / a talking together; informal or familiar talk; verbal exchange of ideas, information, etc.

To some extent, the title of this all-Ohio exhibit might suggest that a “conversation” is transpiring just between the three participating artists - Judy Brandon of Cleveland, Leslie Sheils of Cincinnati, and Carol Snyder of Columbus – and their respective bodies of work. Each “speaks,” in a particular dialect, about observations and/or discoveries of a personal (and yes, sometimes challenging) nature. Each is a response to both the physical and spiritual (emotional/psychological/intellectual) milieu of…being alive.

But it’s also important to consider how, ultimately, art lives only if we as viewers choose to be more than merely casual eavesdroppers on the private dialogues between artists and the ideas they engage, which is to say the ideas that speak to them. The best art can indeed call us to enter and willfully “listen” to the artists as they in turn talk to their muses. In the process, we can discover how their perceptions can resonate and actually converse deeply with our own.

Many of Carol Snyder’s exquisite white porcelain pieces – wheel-thrown as well as hand-built – could certainly be seen as utilitarian vessels. Yet for all of their elegant simplicity of form, they seem to have outgrown such a mundane functionality. The forms have been alternately incised, cut through, layered or otherwise altered so that they speak of Snyder’s connection to more primal things such as landscapes or geographical strata, or moments with nature. The clay recalls whence it came, and Snyder joins the remembrance. Here then are delicate memorial sculptures. Undulating and translucent, they’re transcendent, lyrical totems of places seen, roads taken, or, as in her mesmerizing horizontal wall piece, “A Walk in the Grass with Grandpap,” people well met.

Working in ink, charcoal, pastel, and watercolor, Judith Brandon creates  large panoramic landscapes on paper. Most of them are somewhat abstract, depicting varying states of agitation and flux. On one level they could be a dramatic homage to the majestic if not darker forces and textures of nature – earth, wind, water, and fire.

But the pictures take on another sort of dimensionality when we read the titles, or notice the ghostly traces of linear geometric shapes along with texts that hover amid the misty color washes and tonal fluctuations. These you could call Brandon's initial notes to herself, serving as a conceptual armature on which her expressive drawings rest and evolve. On the placard posted next to her “Golden Rule,” for example, she explains that the lines and text (often nearly invisible after all her very facile surface manipulations are done) “…become the geometry and emotional framework underlying each piece.” The conflagrations, the threatening black plumes and drips in “I Know Good People,” become metaphors for something beyond the apparent when we read her accompanying comments: “A visual sudden burst of gratitude and love for the people who have helped me through the years.”  Now the drawing is no longer a doom-and-gloom scenario, but an unfettered celebration of the explosive potency of gratitude as a life-changing force.

Leslie Shiels’ oil paintings are wholly breathtaking visions. Their tactile  surfaces are visceral reveries of rhythmic painterly gestures that punctuate opulent symphonies of saturated color. Though there’s plenty of room for enigma to breathe here, I get the sense that Shiels might be an old soul seeking to understand and reconcile frayed connections between disparate societies, past and present.
Some of her most piquant works are double portraits, set in shallow, decorated space, presenting individuals from so-called First and Third World cultures side by side. It’s an arresting iconography that includes lavish, unifying background patterns of repeated glyphs or symbols. The portraits give us pause to consider how we define ourselves in relation to “the other,” and our historical tendency to codify personhood by objectifying outward appearances.

And what about that missing slice in “Let Them Eat Cake”? Think of it perhaps as a piece offering to us for sweet resolution. First World? Third World? Try One World.

So it is that the call of this superb exhibit prompted me to visit it several times to bask in its marvelous light. Each visit was an occasion of increasingly treasurable conversations with artistic sublimity.