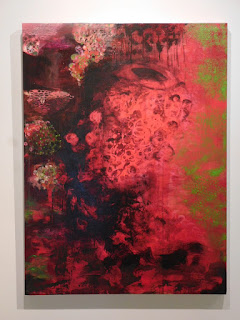 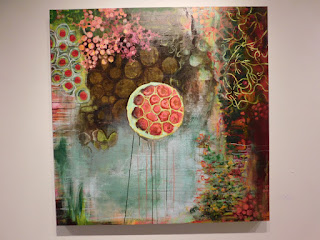 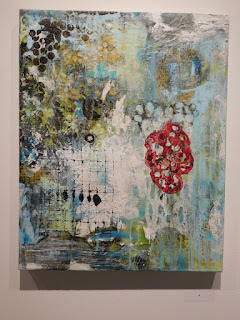 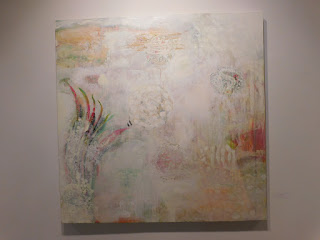 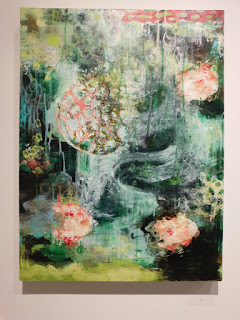 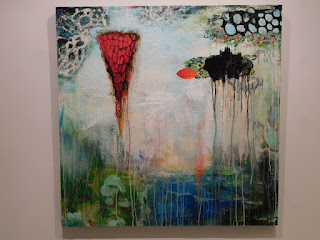 By Tom Wachunas
“Whereas the beautiful is limited, the sublime is limitless, so that the mind in the presence of the sublime, attempting to imagine what it cannot, has pain in the failure but pleasure in contemplating the immensity of the attempt.” ― Immanuel Kant, Critique of Pure Reason

“…The eternal riddle encompasses points in time; it considers decay and rejuvenation. Its innermost secret is revealed in the "other", the spirit world - the ancestral footstep walking behind us.” - Marianne van Lent,  2014

Though it could seem unremarkable to some viewers, among the many aspects that make this exhibit so completely engaging is in how NYC-based painter Marianne Van Lent specifies her medium: fresco secco and dispersed pigment (on canvas or panel). Fresco secco. It’s the very old Italian term for the practice of painting on dried plaster.

While other painters working in some related manner might be understandably content to list their materials simply as “mixed media on canvas,” Van Lent gives us an important insight to her aesthetic. Beyond its literal connotation, fresco secco indicates a subtle alignment with the momentum of painting history. Think of her iconography – even in its clearly abstract appearance - as a continuation of a long tradition, though certainly not limited to fresco secco per se. I mean ‘tradition’ here in the larger sense, namely the one which declared, centuries ago, the raison d’etre for painting to be the transformation of a two-dimensional plane into a compelling illusion or meaningful symbol of “naturalistic” reality.

Modernist painters challenged and otherwise usurped that operative philosophy and, by mid-20th century, declared and liberated the picture plane to be a discrete reality unto itself. In so doing, they offered visions - both representational and non-objective - that we could rightly call metaphysical in character. Abstract painting was a formal departure, in ever varying degrees, from necessarily literal identification with the visible world. Yet at its most potent, such art can nonetheless actually enlighten how we define and perceive “reality” on multiple planes.

So it is that Marianne Van Lent begins by priming her surfaces with a thin layer of plaster. This tactile skin could itself be a metaphor for consciousness – a constant awareness of all the painterly events that have transpired upon it. In that sense, her paintings are self-contained histories of their own making. The gently visceral ripples and creases in the undercoat are still perceptible under multiple layers of luscious translucent washes (the facile glazing of “dispersed pigment” invests her acrylic colors with the distinctive luminosity of oil paint) that seem to float forever in palpable tension with more opaque concentrations of codified, often stenciled shapes, all amid sweeping, gestural brush marks, and all rendered in an exhilarating color dynamic.

While initially inspired by natural environs (glades, woods, or aquatic settings, for example), Van Lent’s imagery is encrypted to simultaneously suggest and transcend familiar physical incidentals. The apparently biological and botanical references to earthly places can just as well evoke processes and mystical phenomena on much larger, and more spiritual, planes. The cellular becomes cosmic, the minute, massive.

Many of the paintings embrace an additional sort of dichotomy: Our (i.e., humanity’s) tentative if not intrusive relationship with nature, which is to say our tendency to undermine the supremacy of spirit. Landscape can conjure, with equal force, an idyllic haven of rest or a scarred battlefield. In “Glade Invaded,” for example, the conical red shape and amorphous black splotch hover menacingly on a misty white field, as if to wound, or kill, serenity.

In considering Van Lent’s “subtle alignment” with the history of painting that I mentioned earlier, I think it’s possible to see her all at once as a Romantic, an Impressionist, a Symbolist, an Expressionist. Her compelling articulations can prompt us to contemplate and savor both the accessible and the enigmatic nature of nature – our own and that of the visible world.

We can regard painters like her as our modern-day shamans – those who purge and intercede, who illuminate old and familiar things with new, magical light. They navigate the sublime – that ineffable state where agony coexists with ecstasy, where the pain of destruction and the rejuvenation of spirit are necessary adjuncts to being alive. To that extent, Marianne Van Lent is also a Realist in the truest sense.