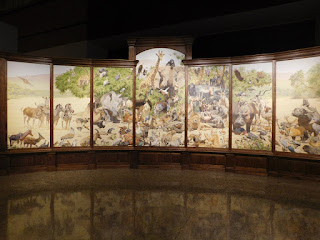 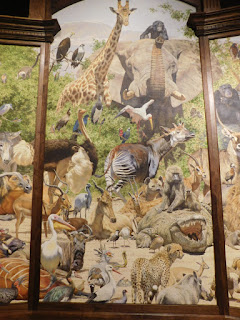 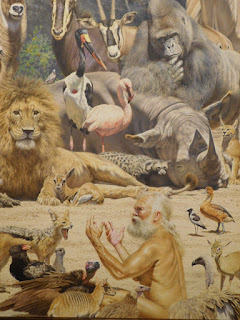 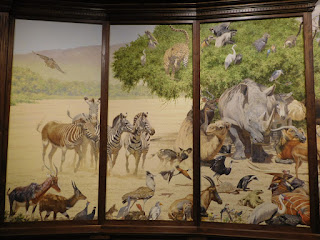 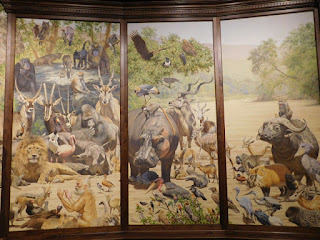 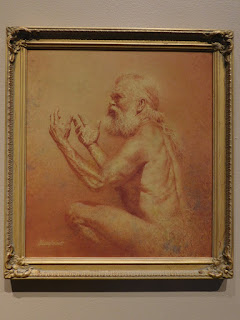 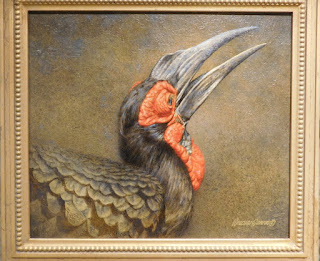 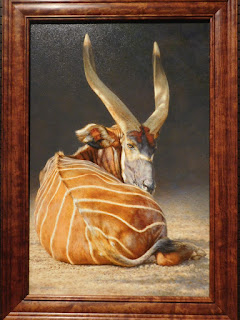 “In wildness is the preservation of the world.” ― Henry David Thoreau

“Until he extends the circle of compassion to all living things, man will not himself find peace.” – Albert Schweitzer

“…Man has been incorporated into the menagerie. He’s been summoned to this gathering of species to answer for some of his previous actions.”   - Brian Jarvi

Before reading much further, PLEASE consider taking the time to click on this link to the web site of Minnesota-based painter Brian Jarvi to see the video and read accompanying text on his African Menagerie: The Inquisition. It’s an artwork of epic proportions, 17 years in the making, consisting of seven connected oil paintings on panels – a breathtaking panorama, 32’ wide and 14’ high:

https://www.brianjarvi.com/welcome/
Jarvi’s motivation for this work began during a journey to Africa in 1989, the first of 12 such trips. Of that first excursion, he has said, “The sights, the sounds, the smells – it felt like landing on another planet. It was jaw dropping. You could witness the cycle of life on a regular basis, which was intriguing to me.”

Jaw dropping indeed. When I picked mine up from the museum floor during my first visit to this exhibit, I felt enthralled in a way I hadn’t experienced since my boyhood. I was maybe nine years old. I remember marveling at the astonishing artistry of elaborate illustrations in a sumptuous Time-Life book about dinosaurs that my parents had given me for Christmas. I also remember being somehow saddened in knowing that those life forms, depicted with such gripping immediacy and realism, were in fact no longer extant.
As if Jarvi’s towering panels weren’t riveting enough, the exhibit also features more than forty additional drawings and paintings. Some are  studies (including pencil and/or charcoal), while many others are sublimely finished oil paintings in their own right – lavishly detailed pages, so to speak, in an ongoing saga of astute, passionate observation rendered with  wondrously masterful technique.

One particularly arresting quality of Jarvi’s monumental centerpiece is the  sensation of immersive warmth. The African sun made palpable. It’s as if the pigments themselves have been infused with sunlight. Uncanny.

And what of “The Inquisition” in the work’s title? Yes, the painting is certainly an imagined scenario, a theatrical fantasy of sorts, and an otherwise unlikely convening of 209 species. But notice the lone, naked human figure seated at the bottom of the panel to the right of the taller center panel. He’s a Caucasian, looking like Leonardo da Vinci, that genius purveyor of the idealized human form. You could think of him in this context as a symbol of Western culture itself, arguably the strongest hand in the disruption of natural dynamics on the so-called Dark Continent.

Something to think about: The stability and diversity of the animal world has been progressively and negatively impacted by the actions of one species – us. The results of our activities have grossly exceeded the kinds of natural occurrences (predictable or not) that can affect the lives and habitats of creatures in the wild. In relation to the survival of Africa’s indigenous wildlife - and for that matter the survival of too many other creatures across our planet – we are not simply a migratory species, but a vigorously, purposely invasive one as well.

And all those meticulously painted animals? Are they a grand jury of abused citizens looking to indict? Or is the naked man there to propose to them a plan for harmony and healing?
The appeal of Brian Jarvi’s art goes well beyond its technical, illustrative excellence.  Jarvi is not just an illustrator (albeit a truly superb one) so much as he is a highly accomplished illuminator. He presents us with urgent questions.

Are we willing to step into the light he so elegantly sheds on our accountability in preserving the dwindling abundance of wildlife around us? Or will the relentless march of “civilized” humanity, all too often driven by greed, neglect, and cruelty, completely kill our capacity – our moral obligation, really - for respect, gratitude, and compassion?

Is it so implausible that in the next generation, some child somewhere might encounter these paintings merely as an academic remembrance – fossils of a kind – of the magnificent life forms that once graced this earth?