A Prayerful Cry from Outcasts 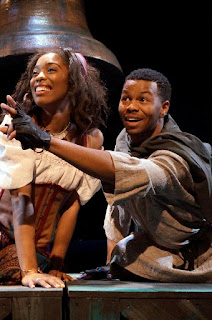 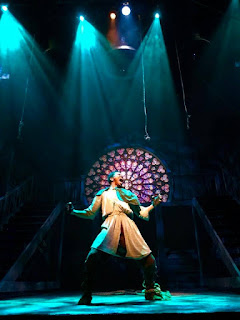 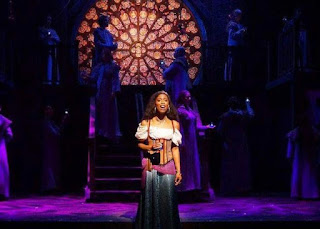 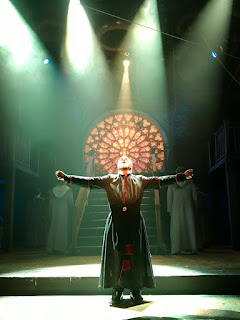 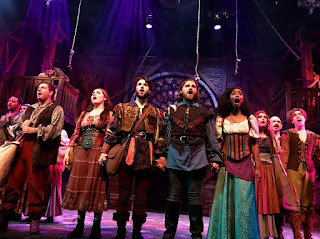 A Prayerful Cry from Outcasts

…There are some days, dark and bitter / Seems we haven't got a prayer / But a prayer for something better / Is the one thing we all share…
- from the song “Someday” by Alan Menken and Stephen Schwartz

Where is it etched in stone that a work of musical theatre must always cheer up the house? The season-ending Players Guild production of The Hunchback of Notre Dame, based on the Victor Hugo novel and with songs from the 1996 animated Disney film, is a far cry from the giddy jubilance we experienced last September in the Guild’s dazzling production of Disney’s Beauty and the Beast. There were moments throughout Hunchback when the famous passage in T.S. Eliot’s poem “The Hollow Men,” crept into my head: “…This is the way the world ends. Not with a bang but a whimper.”  This is the way the Guild’s season ends?

As a theatrical work, The Hunchback of Notre Dame (book by Peter Parnell) is a mercilessly contemplative story – somber, brooding, and seemingly hopeless in its complexity – and arguably flawed by an over-indulgence in expository narrative passages muttered or chanted by robed priests, choirs, and statues. Yet there’s something ineffably spectacular – even courageous - in how director Jonathan Tisevich has effectively let light shine through such a dark tale.

It’s a light both symbolic and literal, revealed in many ways, starting with  the impressive set designed by Joshua Erichsen, in conjunction with the resplendent lighting design by Scott Sutton and offstage live orchestra conducted by Steve Parsons. All of it evokes the ritualized majesty and mystery of Gothic cathedrals in 15th century Paris. Throughout the proceedings, these hallowed halls and shadowy niches often reverberate with explosive choral performances from the ensemble, capturing the glorious polyphonic pomp and solemnity associated with the High Holy Mass of old. The Latin texts and chants, peppered with Kyrie eleison ( Greek, actually, for “Lord Have Mercy”) and Dies irae (Day of Wrath), constantly portend trouble ahead.
Archdeacon Frollo, played here by Jim Graysmith, named his bastard nephew Quasimodo (meaning ‘half-formed’) and regards him as a simpleton to be disciplined in the ways of the Church. Frollo raised him from infancy and forcibly confined him to Notre Dame’s bell tower to supposedly shield him from a morally corrupt world. Graysmith gives us a robust portrait of Frollo’s hypocricy and malevolence, beginning with his guilt-riddled lust for the alluring young gypsy woman, Esmeralda.  After being soundly rebuffed by her, he condemns her to die as a witch and embarks on a murderous campaign to purge Paris of its sinful gypsy population. While the clarity of what Graysmith is saying is often diminished when he sings in his gristly lower register, there’s no mistaking his palpably sinister intent. Chilling.

Matthew Heppe plays Phoebus, a cathedral soldier employed by Frollo. He’s a carousing womanizer when we first meet him, but is soon drawn to Esmeralda enough to pursue her in earnest. Just how earnest, exactly, is a lingering question, as his cavalier demeanor feels a bit too tentative at times. Interestingly, one could reasonably wonder if Clopin, the energetic leader of the gypsies, might be the more sincere suitor. Or is his infectious passion more about loyalty to his community at large? In any case, Sean Flemming brings delightful ebullience to that role.

And speaking of ebullience, there are some notable passages of mirth and magic amidst the darkness, including the gypsy joie de vivre evident in the ensemble numbers choreographed by Michael Lawrence Ayers. And a particularly enchanting scene in Act Two transpires in the song, “Flight Into Egypt,” wherein a statue of the martyr, St. Aphrodisius, played by Jake Sustersic, comes to life and directs Quasimodo to rescue Esmeralda. In a clever illusion, Sustersic appears to be holding his decapitated head in his hands as he sings.
The undeniably brightest lights in this story are the electrifying performances by Desiree Hargrave as Esmeralda, and David Holbert as Quasimodo. What began as Esmeralda’s simple act of mercy in rescuing Quasimodo from the cruelties heaped upon him by Parisians during the annual Feast of Fools becomes a profoundly incorruptible bond of hope and love between societal outcasts. Indeed, when Hargrave sings “God Help the Outcasts,” it’s a soaring, cathartic focal point, a gripping pledge of sympathy and an otherwise bittersweet melding of selflessness, resolve, and achingly real supplication. And whenever Holbert sings, he sheds his contorted posture and slurred speech so that his voice becomes a strong, piercing presence, invested at some points with boyish wonder and joy, at others with a compelling sadness and urgency.

The story ends as it began, with a question: “What makes a monster, and what makes a man?”  We might just as well wonder: What makes lust and what makes love?  While the end is not a happily-ever-after one by any worldly measure, it’s certainly not a whimper. It may be, for some, a dour finale, a mournful tolling of bells in an inapproachable tower. But the larger, more sobering realization here is in effect a Divine revelation – a ringing reminder that the purest love is nothing if not sacrificial. It’s not so much a matter of Dies Irae as it is one of Kyrie Eleison.