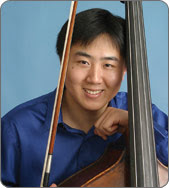 
The February 6 Canton Symphony Orchestra (CSO) concert at Umstattd Hall, with Gerhardt Zimmerman conducting, was a stunning demonstration of effective program pacing - a slow, simmering build-up through four works, into the full climactic boil of the evening’s finale. And remarkably, the musical linchpin through much of this lively and varied program was the double bass as solo instrument.

One delightful and informative feature of CSO concerts are the “Performance Preludes” – informal talks with the audience an hour prior to the concert that are designed to give background on the evening’s program selections. On this occasion, M.J. Albacete, executive director of the Canton Museum of Art, astutely presented a thoughtful selection of recorded excerpts wherein the double bass figured significantly in some composers’ works – Dragonetti and Beethoven, to name just a few. In similar fashion Albacete addressed the general notion of alternative transcriptions of composers’ original works by other composers or conductors, in anticipation of this night’s transcription of Dimitri Shostakovich’s String Quartet No.7 in f sharp minor.

First on the program was “Last Round,” by contemporary Argentinian composer Osvaldo Golijov. This extraordinary eulogy to composer and bandoneon (the accordion-like instrument so central to Tango music) player Astor Piazzolla calls for two string quartets, with double bass player in the center, to perform while standing, reflecting Piazzolla’s own performing stance. To be sure, watching the musicians perform here in this fashion additionally conjured the intensity of Tango dancers locked in choreographed combat. While double bass is not a prominent solo presence in this work, it does provide a constant, pulsing stream of sonorous rhythms and punctuations that drive the relentless, menacing attacks and counter-attacks of the quartets during the first movement. The muscular playing by the quartets was notably true to the composer’s desire that they should suggest “the act of a violent compression of the instrument (bandoneon).” Their transition into the slow, far less acerbic second movement was a marvelous bent-note sigh, giving way to a moving, elegiac melody delivered with fine attention to its achingly sweet tonalities.

Thus the mood was set for the bittersweet “Moon Reflected in Er-Quan Spring,” by the legendary Chinese composer and erhu (2-string violin) player Hua Yanjun (A’bing). The piece, originally written for solo erhu, was quickly transcribed into arrangements for orchestra and various solo instruments after A’bing recorded it in 1950. For this concert, world-renowned double bassist DaXun Zhang was on hand to perform it with accompanying string orchestra. He too performed standing up. But unlike the aggressive posture of the previous work, the stance here possessed the quality of a warm caress. Zhang didn’t merely play his instrument well. He embraced it as he would a dance partner, firmly guiding her through deeply lyrical passages, dazzling in their range of scale and timbre. Against the delicately meditative, shimmering textures of the orchestra’s accompaniment, Zhang’s astonishing skill elicited from this most unlikely of instruments those alternately throaty and soaring wails so characteristic of the erhu.

By now the audience was thoroughly won over by Zhang’s charismatic virtuosity, and otherwise primed for the dizzying scale runs and melodic richness of Giovanni Bottesini’s Bass Concerto No. 2 in d minor. It is a work by a composer who was fondly called ‘the Paganini of the double bass,’ and embraces musical wit and whimsy in the first movement, gentle lyricism in the second, and a bouncing, dance-like ebullience in the finale. Fueled by Zhang’s thrilling showmanship, the orchestra in turn performed with crisp panache.

A somewhat jarring shift in mood followed with the Shostakovich String Quartet, transcribed here for full orchestra by Maestro Zimmerman. He explained to the audience that he felt the work was more than simply the composer’s remembrance of his wife, Nina, and their stormy marriage. His orchestral additions include double basses and three percussionists, and the overall arrangement is intended to reflect the composer’s tumultuous relationship with his government and fellow artists in a volatile era of Russian cultural persecution. Accordingly, Zimmerman’s transcription is explosive, bringing a fresh and startling – though never extraneous – urgency to a work already substantial in its dramatic impact. The orchestra rose to the occasion with searing, emotive clarity.

And so it was as if unfettered joy itself, kept at bay to this point, burst triumphantly into the auditorium with the evening’s final performance - Nikolai Rimsky-Korsakov’s electrifying Capriccio espanol. This is a work of colossal color and sparkle, and the orchestra delivered it with its hallmark style of infectious effervescence, much to the delight of all present.