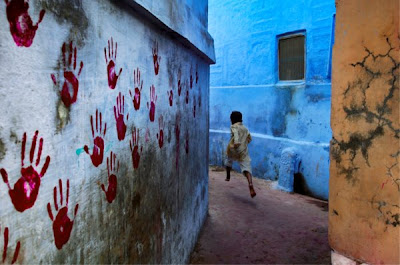 
Accident, or skill? Luck, or intentionality? Serendipity, or destiny? What exactly accounts for that ineffable capacity in some artists for leaving us images that settle into our being like so many unforgettable, timeless melodies? How is it that such artists can – like sorcerers casting spells – conjure pictures so gripping and indelible that they become icons of our human spirit? Whatever ‘it’ is, photographer Steve McCurry owns in abundance.

The retrospective exhibit of nearly 50 of his photographs, currently on view at Joseph Saxton Gallery of Photography, is called “The Unguarded Moment.” It is a title that points to a fundamental, if not ephemeral discipline in producing photographs of the stunning caliber we see here. Call it complete immersion in the present, or intuition finely honed to discern intriguing pictorial possibilities - to frame and concretize what is by its very nature transitory. In short, to recognize magic when it presents itself.

McCurry’s extensive travels as a documentary photographer for National Geographic to such places as Afghanistan, Burma, Cambodia, and India, have earned him prestigious awards while generating a magnificent body of work that yields visions both revelatory and exquisitely mysterious.

Whether depictions of majestic landscapes, the devastation of war and poverty, decaying sacred temples, crowded cities, or simple portraits, the real and immediate beauty of these images emanates from their passionate embrace of the fleeting human dramas unfolding within them. Some of those dramas are quietly startling, as in “Mother and Child on Tonle Sap, 1996,” wherein a mother and her child lay asleep in a hammock, a python slithering on the floor beneath them. Others are unexpected apparitions of hope amid disaster, like “Tailor in Monsoon, 1983,” showing an old man, completely submerged in the flood but for his smiling, stubbled face, and fingers, gripping a salvaged, corroded sewing machine. Still others are imbued with enigma, as in the eerie “Boy in Mid-Flight, 2007.” A boy scampers through an alley, one wall tattooed with deep-red hand prints – strange runes signaling what might be…hello, surrender, or a warning?

In “Afghan Girl, 1984,” one of McCurry’s truly signature images, a 12 year-old refugee peers at us from beneath her tattered red cloak, her eyes telling a hauntingly – or painfully - mixed story of vulnerability, wounded trust, and resolute strength. In the text that accompanies the photograph, McCurry writes, “There is an ambiguity to her expression, a certain something or quality to that picture that people respond to.” Certain something or quality indeed. Actually, it’s fairly impossible to find a picture in this entire collection that isn’t, to some extent, invested with an uncanny power to draw us into its compelling reality.

Our finest art has always, in varying degrees, transcended the existential markers of time and place to speak to our souls. And these pictures don’t just speak. They sing.

Photo: “Boy in Mid-Flight, 2007,” by Steve McCurry, on view in his retrospective exhibit, “The Unguarded Moment,” at Joseph Saxton Gallery of Photography, through April 2, 520 Cleveland Avenue NW, Canton, www.jsaxtongallery.com

ON FRIDAY FEBRUARY 19, McCurry will be at the Canton Museum of Art for a slideshow presentation and Q&A from 9a.m to noon. He will be at Saxton Gallery from 3p.m to 6p.m for an artist’s reception and book signing – pre-order books early (330) 438-0030.
At 8p.m. McCurry will present a lecture, followed by Q&A, at Malone University’s Johnson Center for the Arts, 2600 Cleveland Ave. NW.
Admission to these events is free, but reservations are required by going to www.evenbrite.com and search under Steve McCurry.
Posted by Tom Wachunas at 2:23 PM

This show was amazing! I left the opening night with a renewed connection to humanity visited in the deep gazes of those represented in the images, yet also a deeply felt separation of the worlds in which we respectively live.