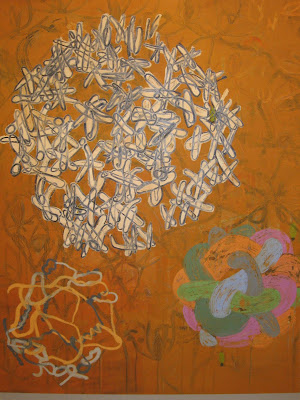 
Recently, I finished reading – or more accurately, navigating - a ten year-old book entitled “The Elegant Universe” by Brian Greene. The experience was a dizzying one – an arduous voyage leaving me with only a feeble grasp of the thinking behind a “unified theory of everything”. At the end of the day I am the proud owner of a dandy glossary of terms that often defy use in everyday conversation with reasonable, socially well-adjusted people – terms like Calabi-Yau space, chirality, fermion, torus, weak gauge symmetry, and Z boson. Ahhh, but the pictures are fantastic.

No, not those dazzling, jaw-dropping digitalized panoramas of starry, deep space dramas or eerie planetscapes. I’m referring to the book’s fascinating illustrations, in lowly black-and-white, of scientists’ models for demonstrating hypotheses about such things as particle physics and multi-dimensional space, to name just a few. So while my general ignorance of hard science remains vast, exceeded only by my ceaseless curiosity, my appreciation of the esthetics of theoretical models is undiminished. That appreciation was recently enhanced by the current exhibition of oil paintings and works on paper by Jack McWhorter, at Malone University’s Johnson Center for the Arts.

The exhibit, called “Forces Constant,” is a gathering of six oil paintings on canvas and 12 framed oil works on paper. McWhorter is an associate professor who teaches painting at Kent Stark. If I read his statement for the show correctly (and it is fortunately written in language far less arcane than Greene’s book), he is inspired by, among other things, the interface of science with art, and the models that scientists employ to illustrate theories about various properties of the universe, or to describe ephemeral relationships within larger systems of interacting phenomena. Which all sounds quite cerebral and suspiciously obtuse, until you get to his phrase, “…formalization of intuition.” Now, the floodgates of imagination are opened, and the paintings begin to take on an efficacious logic of their own. And what abstract painter would have it any other way?

McWhorter’s images aren’t handily explainable as static pictures “of something” in the prosaic sense of capturing familiar superficialities as much as they are essences. For all of their recurring structures and symbols, they are nonetheless (to use one of those pesky cosmology terms) poetic singularities. Or perhaps they’re arrivals, carrying with them ample evidence of the sometimes circuitous paths that led to their current destination, their “look.” In that regard they also embody the sensibility that at any moment they could be moving on. Certainly on one level, then, these are painterly snapshots of structures and relationships in flux – portraits, as it were, of process.

You’d think that such heady (and certainly playful) forays into abstraction as these are - with their overall appearance of loose, gestural spontaneity - would generate highly tactile surfaces lush with paint. Surprisingly, these configurations are thinly rendered, yet still possessing a raw, even dense physicality. The paint isn’t so much laid on the surface as it is thoughtfully “written” into it, then often brushed over and re-written, to produce intricate, translucent matrices of lines and shapes that undulate in ambiguous space, at once shallow and infinite. Equally thoughtful is McWhorter’s rich palette that, whether earthy or ethereal, is easy on the eyes and certainly no less engaging than his energetic drawing.

Having said all of that, the question remains: what, exactly, are we looking at? For example, are the separate clusters in “Three Charged Bodies” variations of a single entity undergoing a metamorphosis? Biological? Chemical? Psychological? Astronomical? Oddly enough, they do bring me back to Greene’s discussion of the extra spatial dimensions that necessarily emerge from String Theory into something called ( I can’t begin to tell you how exciting it is to be able to finally use this term in a full sentence) Calabi-Yau space.

But really, these paintings are, in a larger sense, intriguing and visually thrilling metaphors for the relational thinking that is the heart of artistic intuition. I think. And one of these days I might tell you how they remind me of Laplacian determinism.


Photo: “Three Charged Bodies,” oil on canvas, by Jack McWhorter. On view through February 26, in his exhibition called “Forces Constant,” at the McFadden Gallery, located in the lower level of the Johnson Center for the Arts, Malone University, 2600 Cleveland Avenue NW, Canton
Posted by Tom Wachunas at 2:32 PM