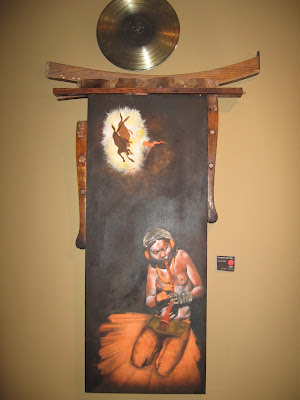 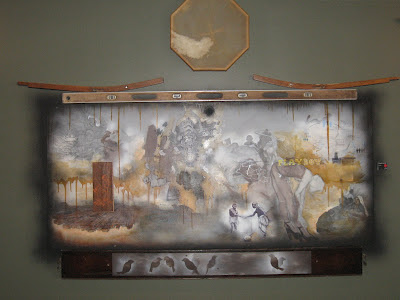 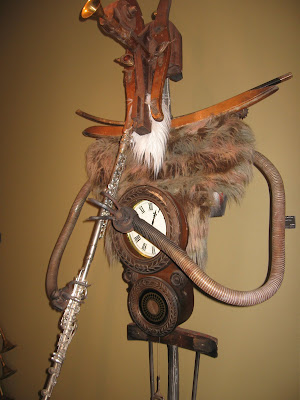 His palette is rarely festive. His thematic content is a dense conflation of earthly scenarios, myth-like fantasies, and personal commentaries, often generously colored with surreal whimsy. His materials are a dumpster diver’s delight.

The art of painter and sculptor Joseph Close looks like it’s made from the stuff of junkyards: salvaged furniture remnants, industrial bric-a-brac, and all manner of found objects. More ingenious than merely clever, however, there’s nothing gratuitously cute or kitschy about his ambitious constructions. Made from castoffs, they successfully cast off the insouciant gee-whiz-what-can-I-do-with-these-old-car-parts-and-jewelry mentality behind much of the popular trash art being made these days.

Additionally, Close is at his best when he enhances the emotional heft of these assemblages by incorporating his facile handiwork as a remarkably gifted figurative painter. There’s an ineffable rightness and cohesiveness about his works that fuse painted imagery with variously combined appendages of stressed wood, metal, or fiber. They often have the look of ritualistic or ceremonial icons, or preternatural artifacts fashioned by an old soul.

That said, some of the works in his current one-man show at Cyrus Custom Framing & Art Gallery exude a gravitas that can be at times darkly enigmatic or arcane. But even at their most chromatically dreary (like the early Cubists’ canvases) or conceptually obtuse, what keeps these works compelling enough is their narrative spirit. There are stories to be found here, some more accessible and/or light of heart than others.

Both “Pop and the Guru” and “Gaia and Rabbit,” for example, are imbued with a folkloric sensibility that’s both mystical and charming in a quietly brooding sort of way. Pieces such as “Symphony,” “Moses ‘Rabbit’ White,” and “Snow and Clarence” are relatively more celebratory in nature – playful homages, so to speak, to music.

Indeed, in this collection, Close seems to have devoted particular attention to a musical Muse. He has titled his exhibit “Step Wise” – as in stepwise, here used in the word’s musical application of a gradual progression of adjacent tones. It’s an apt title when considering that instruments, or parts thereof, are a repeated motif throughout the show, and usually allude to the world of jazz. And to a certain metaphorical extent, the ‘cool’ lyric spirit of these pieces suggests the be-here-now rawness of free-form jazz improvisations.

Nowhere is the aura of gritty, poetic immediacy more apparent or haunting than in “Entrophy.” The carpenter’s level perched on the top edge of the painting might symbolize the higher processes needed to bring equilibrium to the expressionistically rendered images below – a subtly epic montage of societal structures in flux. A balancing of chaos and renewal, perhaps. Like many of the works here, it’s a story at once fleeting and gripping, and an otherwise deeply sensitive embrace of ascending human spirit amid worldly degradation.