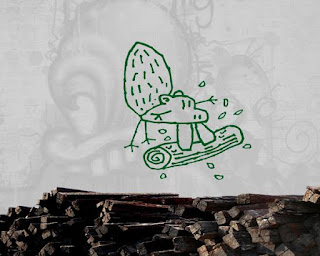 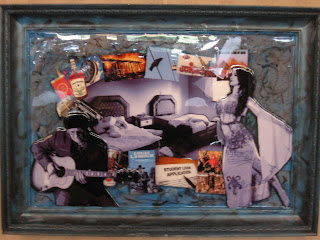 A Manic Montage
By Tom Wachunas

“I have very little tolerance for the assumption that art should coddle, entertain, or intrigue us soley on the merits of familiar, conventional rules of composition, skill, or methodology. I should hope that by now we’re smarter than that.”  - June Godwit, from “There’s Something In My Cheek But It’s Not My Tongue”-

After a somewhat protracted hiatus (a story I’ll save for another time, maybe), Gallery 6000 has snapped to attention with some crackling new, eye popping art. Hmmm. Snap…crackle…pop? Sounds  like it could be a title for an exhibit. And so it is.

Compared to Craig Booth’s earlier, relatively more straightforward ventures into digital art photography, his works here are considerably more evolved and complex in visual textures and multiple perspectives. You could arguably call them snippets of reality from a pop-culture diarist.

Booth’s incorporation of collaged images mounted in relief (many clearly appropriated from ‘found’ sources) gives his often surreal content a mock-3D appearance, and a sculptural heft. Their scope is dreamlike, to a certain extent even cinematic, and not unlike the strange narratives you might find in a modern graphic novel. A few have the aura of a William S. Burroughs-type fantasy, as in “Drunken Poets Dream.” Others exude an air of free-association with personal memories. With their surfaces uniformly encased in a generous coat of high-gloss clear resin, the pictures are densely composed moments and suspended as if under water. And with their saturated colors sometimes reminiscent of the psychedelic era, these snappy pictures do indeed pop.

Rick Huggett’s pieces are digital photomontages that incorporate vinyl decals. Five of them feature cartoonish critters (a bat, a cow, a beaver, a mouse, and a newly-hatched chick) rendered in his somewhat trademark style of jittery, boldly colored contour lines. They float against ethereal (printed in extremely light gray) background images. His seemingly arbitrary juxtapositions of photographic realities with the oddly refined crudity of his logo-like drawings certainly have a childlike if not enigmatic goofiness about them.

It would be easy to write off these reductivist configurations as inane or simplistic. But I think there’s something more engaging and sophisticated going on here. Maybe they’re a collective commentary on homogenized depersonalization and random acts of meaninglessness. Or perhaps a coolly distilled response to the boggling sensory overload so easily encountered on the Internet. Visually, and ironically enough, for all of the open space in Huggett’s compositions – occupied yet eerily barren – I’m reminded of the ridiculously cluttered look and content of web pages such as those on Facebook. More ironic, we’ve immersed ourselves in a technology that on the one hand promises connectivity with flesh-and-blood reality, and on the other pares life down to the www language of codes, hyperlinks, icons, and trends. And we seem to ‘like’ it.

One of Huggett’s pieces, showing a funky spotted cow wearing a bell and floating next to a carton of cultured lowfat buttermilk, is called “Ring Bell, Win Prize!” Got life? Click mouse, press Enter.  LOL.