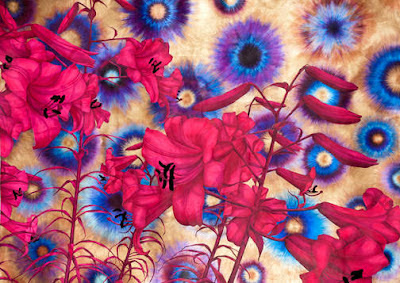 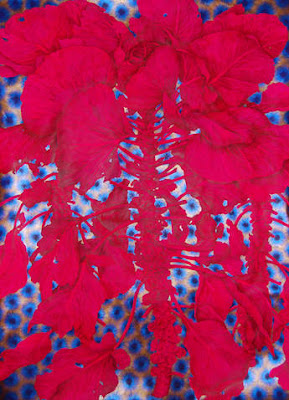 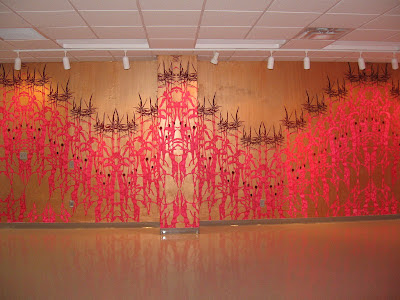 Some visual phenomena warrant fresh descriptive vocabulary. Case in point: “Fluorescence,” the stunning exhibit of seven new acrylic paintings on paper by Sarah Fairchild – an artist and arts educator living in Columbus - recently opened in the Main Hall Gallery at Kent State University Stark campus. I don’t mind telling you that the last time I saw anything on a wall this ecstatically hallucinatory was in 1970. To the blaring strains of Pink Floyd’s Ummagumma LP (antique 12” vinyl disc), a herd of multicolored elephants was waltzing through a psychedelic rain forest splayed across the white walls of a friend’s apartment. No, not a Disney movie. Just my first acid trip. I know, I know. Those of you who know me might be thinking, “This would explain a lot.” But I digress.

Suffice to say that rarely have I seen paintings of a horticultural nature (mostly garden vegetables here) rendered in such a uniquely mannered way, not only in their lavishly meticulous detail, but also in palette and composition. Rarer still is to see how this particular physical space has been transformed into a wholly riveting, and certainly magical visual encounter.

Even the gallery air itself seems alive with a pervasive, hushed, faintly reddish glow. It’s a delightfully theatrical effect due in large part to how these works collectively reflect the gallery lighting. All of the leafy forms are painted in analogous fluorescent pinks and magentas that hover dramatically against variously-hued backgrounds shimmering with subtle metallic iridescence.

Welcome to Sarah Fairchild’s phantasy garden. Here, the lush, warm plant life appears so tactile and dimensionally substantial (often aided by the integration of accents in dark nylon flocking) that it’s hard at first to believe these are, after all, flat paintings. Her forms are like relief sculptures floating in atmospheres suggestive of phosphine – that physiological sensation of feathery light blooms you see when pressing on your eyeballs through closed lids. And for all of their beautiful exactitude as representational imagery, many of the paintings’ interior passages are intriguingly abstract. Some of those passages are playful reversals of the figure-ground dynamic, as when little chunks of background color show through holes in the leaves.

Throughout the gallery space there is a type of vaguely ‘haute couture’ wallpaper sensibility at work. In fact, in her statement for the show, Fairchild at one point cites a kinship, albeit thoroughly modernized, with the wallpaper designs of Charles Burchfield. It’s true that living within Fairchild’s bold configurations are echoes of the charged ethereality that occupies so many of Burchfield’s more haunting landscape paintings. But Fairchild pushes that ethereality into even more ornate and intricate realms of pure design, such that each individual leaf, stem, shadow, or snippet of “sky” is often a microcosm – at once part of the whole and a whole unto itself.

Speaking of wallpaper, one work here is indeed just that. “Maize” (acrylic, silkscreen, and nylon flocking) is adhered directly to an entire wall of the gallery, measuring 104” x 336”. This utterly mesmerizing vision gives new meaning to "color field" painting. The cornstalks seem to simultaneously stand at attention and vibrate with repeated, fascinating symmetries that in some ways bring to mind Rorschach ink blots.

Good enough to eat? Fairchild’s distinctly irradiated palette might suggest a tentative if not volatile relationship between contemporary agricultural technology and the purity of the food we ingest. To that extent, her renderings of edible plants are arguably not “appetizing” in a traditional sense. But in this spectacular manifestation, they do provide eminently satisfying cerebral sustenance, along with amaizing visual grace.

“Fluorescence” will be on view through May 4 at Main Hall Gallery, lower level of Main Hall on the Kent State University Stark campus in Jackson Township. Gallery hours are 11 a.m. to 5 p.m. weekdays, and 10 a.m. to noon on Saturdays.