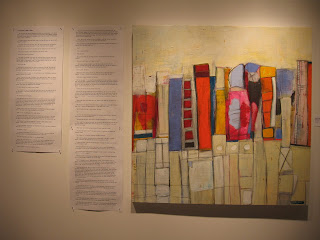 
“Blind Date: The Romance of Word and Image,” is the name of a bold and fascinating exhibition now on view at Anderson Creative Studio in downtown Canton. First, let me tell you why I think it’s bold.

For as long as I’ve been writing about art (nearly 25 years), I’ve been an avid observer of how people in general look at art in a gallery or museum setting. I don’t mean ‘look at art’ in the sense of how people feel, think, or theorize about it. I mean how they are physically with art in real time and space – their posture, their eye movements, and the amount of actual time they spend in its immediate proximity. Over the years I’ve noticed that too many (I’m ever-closer to amending that to MOST) people treat the experience with a hurried nonchalance, absentmindedly breezing through exhibits with the vague hope, perhaps, that something will “catch their eye.” They simply look too fast. While I’m sure there are those who will disagree, I’m nonetheless convinced that we live in a society that discourages thinking too long or hard about what, exactly, we’re seeing. Truly dedicated art viewers seem to be a minority among us, if not a dying breed.

What makes this exhibit bold, then, is its unabashedly clear demand on our time. For here, to wholly internalize what is before us, we must not only look at the visual content, but read the accompanying text in full if we are to assess a connection between the two. In a way, we as viewers are witnesses to a performance, or marriage of sorts, between visual artists and writers.

The broker of this clever union is performance artist and writer –and here, curator- Craig Joseph. He paired 15 visual artists with 15 writers (a combination of individuals from Canton, Chicago and Minneapolis). The visual artists made works given to the writers to inspire literary works in a variety of genres, and in turn the writers provided material on which the artists based their visual pieces in a wide variety of media.

What’s most interesting here is that while each work in the show is necessarily an integrated presentation of object or image with a text, both the literary works and the visual works (with only a few weak exceptions) function as engaging, stand-alone pieces in their own right. Call it an exercise in simultaneous autonomy and symbiosis. In the end, this is a refreshingly successful collaborative project of remarkable substance.

Also interesting is how the writers’ chosen genres link up so effectively and appropriately with the visual artists’ chosen mediums. Clearly, the magic of artistic intuition is at work here. “Nativity,” a deeply moving poem by Carter Smith, for example, enhances the intensely personal, even mysterious quality of Joseph Close’s haunting “The Avatar and the Nash Equilibrium.” A similar chemistry is at work in the relationship between Michele Waalkes’ shimmering fiber piece, “The Verge,” depicting a church-like interior, and the reflective musings in the poem, “Shadows,” by Kris Lindquist.

One particularly good example of committing ample time to appreciate the depth of a work can be found in the collaboration between painter Marci Axelband and writer Judith Christy. Christy’s “Bad Connection” might be the longest written work in the show, but reading it all the way through yields a satisfying sense of real connection. Her narrative reads like a captivating scene from a noir film or play, telling the story of a phone conversation between a husband and wife discussing their impending divorce. Axelband’s abstract “Boxes” is captivating, too, and could be a crowded cityscape, or perhaps an elaborate phone doodle on a grand scale, depicting stylized ‘figures’ and ‘ghosts’ locked together in claustrophobic tension.

I found myself increasingly absorbed in reading each line of the story, my eyes darting back and forth between text and painting, looking for, and ultimately getting the gist of the works to my delight. This process is necessarily repeated in viewing each collaboration in this show and, as in the Christy-Axelband work, generally delivers an edifying result.

It is indeed a process that understandably asks us to go against the grain of our normally attention-fatigued, brain-numbing routines and be more intentional with our time. And in some ways, this exhibit challenges us to be willing to be enchanted. Think of it as both taking the time to savor a marvelous art show as well as giving time to these artists and writers who have surely earned it.


Photo: Installation view of text for “Bad Connection” by Judith Christy, and “Boxes,” pastel, acrylic, and water-based oil by Marci Axelband. One of 30 collaborative works on view in “Blind Date: The Romance of Word and Image,” at Anderson Creative Studio, 331 Cleveland Avenue NW, through January 31. Gallery hours: Noon to 5p.m. Tuesday through Saturday.
Posted by Tom Wachunas at 1:30 PM

My family and I made this exhibit our first stop on "First Friday". We were all so delighted to view it! I, too, love the concept and was especially moved by the Tim Belden/Nick Brewer piece toward the back of the studio. While I don't remember the title, it was a sweet tribute to Tim's sister, Kate, as we later learned from him at the Saxton Gallery. As always, I've enjoyed your comments here, Tom. Thanks for sharing.