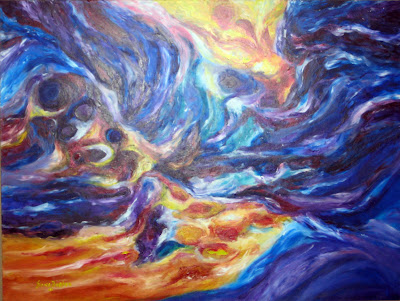 For the better part of the 14 years I resided in New York City, I was sure that despite the fact that being a painter was an unreasonable pursuit by modern, “real world” terms, I had nonetheless found a place that welcomed and even nourished that unreasonableness. New York is, after all, famous (or infamous) for such sympathies. For me it was a safe place where even the most unusual, unorthodox visions and voices could thrive.

Since coming to Canton some 18 years ago, my sense of our city remains one of stubborn optimism in the face of a sociocultural milieu resistant to fully -or at least consistently- embracing and supporting (both commercially and intellectually) the level of artistic energy and daring that I experienced in New York. Having said that, I am thrilled that there are artists residing here who continue to hone skills and visions that are, in varying degrees, bold, challenging, and genuinely refreshing. In that realm, I offer for your consideration the work of four painters – Gene Barber, Martin Bertman, Aaron Hubbard, and Isabel Zaldivar- in the exhibition, “Abstractitudes,” now on view at Gallery 6000.

Much of the raw physicality in the acrylic canvases by Gene Barber, such as “Life Before Man,” comes, simply enough, from his technique. His bare-hands application of paint imbues the works with a gestural immediacy and certainly a resonating emotional intensity, all rendered in bright, saturated colors. Forms seem to rise and fall like so many gaseous clouds and liquid streams, conjuring, perhaps, ghosts of a volatile, primordial soup.

The acrylic ink paintings by Isabel Zaldivar have a similar overall sensibility, though the loose forms in her pictures have a more concentrated, tactile appearance. Indeed, her paintings revel in intricate pictorial textures that are comparatively “down to earth,” suggesting mysterious, sometimes turbulent landscapes. Amid the many amorphous, churning pools of color that make up the compositions, there are judiciously placed oases for our eyes to rest – shapes that could be a patch of sky, a small field, or calm bodies of water. Subtly hidden throughout the rich depths of “Sanctuary,” for example, several birds are nestled.

The ambitious canvases in the “Cartographicalanarchic” series by Aaron Hubbard are clustered meanderings of dots and puddles that float in cloudy seas of “background” color. Large “islands” of poured paint are surrounded by smaller groupings of drips and spatters, many of those in turn emphasized with surrounding circles or irregular outlines rendered in marker. The overall effect is reminiscent of aerial views, or maps of archipelagos. But these delightfully strange pictures - at once abstruse and intriguing – are suggestive of far more than superficial geographies, I think. On one level they could very well be metaphors for the human pursuit of relational community, or even the pursuit of meaning itself.

The enigmatic spirit of the paintings by Martin Bertman, on the other hand, seems relatively more accessible, if only because in this group, they exhibit a pictorial content somewhat closer to what I would call representational reality. But it is a content nonetheless abstract at heart. Bertman’s images are compelling arrangements of decidedly personal symbols, executed with fluid painterly confidence. All of his paintings here are executed with a keen eye for compositional elegance along with, as I’ve noted in the past, an enthralling color sensibility, as in “Interior,” or “Entwined.”

I’ve also noted in the past that I have no axe to grind with purely representational painting. Canton has an abundance of remarkably talented, practicing traditionalists, many of them to one degree or another successful in finding a local market for their work. But Canton is far from a hotbed of abstractionist expression, and I’ve tended to view the local public at large as somewhere between tepid and nonresponsive in its embrace of abstract art in general. So I think shows like this one send an important message. The work being done by artists such as these, while often seen as outside the comfortable pleasantries of “normal” or “popular” art, deserves our undivided attention and respect.

What always fascinates me about the kind of abstract painters we see in this show is their fundamental surrender to the substance, the physicality of paint itself. Such painters have evolved distinct visual languages. Those languages are free from the constraints of manipulating paint to merely recapitulate visible reality. They are in fact languages exquisitely endowed to articulate the drama of being alive, languages that define things spiritual and metaphysical. Things on the fringe of our perceptions. Things that need to be illuminated.