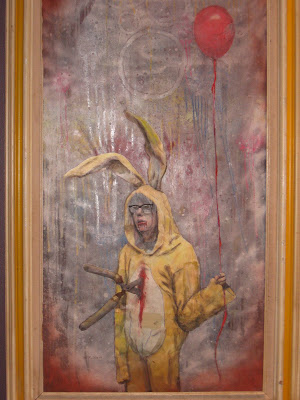 
After attending this year’s opening of the Stark County Artists’ Exhibition at the Massillon Museum, I couldn’t get the lyrics, “Killing me softly with his words…,”out of my head for the rest of the evening. Some of you may have read Dan Kane’s revelatory piece in the January 15 Repository Ticket section wherein several artists in the show talked about their entries. Bili Kribbs said that his painting, “Zombunny to Love,” (depicting a young man in a bunny suit, holding a red balloon on a string, and bleeding from the garden clippers sticking out of his chest) was simply a portrait of a friend in a Halloween costume, albeit an unsettling one. So the cat was out of the bag, or more precisely, the bunny out of his hole. What was interesting to me was watching how viewers looked at the piece, trying to decipher its “meaning”. Many of them clearly hadn’t read the article, and were genuinely puzzled if not mortified in their reaction to the work.

But even with knowing beforehand what was on the artist’s mind (which unfortunately killed any sense of mystery or surprise for me), the painting still exudes a daring, raw, even courageous energy. It is an energy that is sadly missing from this show as a whole. So yet another song began to invade my head, “Is That All There Is?”

For at least the previous seven or eight years, I have left this annual exhibition fairly well satisfied that I had seen a substantial – at times spectacular - cross-section of the rich, varied, and bold artistic talents to be found in Stark County. Not so this year. In fact, this show is distinctly lethargic in comparison. Call it handsome but toothless. How can this be?

Any juried show has the built-in problem, or challenge, of jurors overcoming their personal agendas and tastes in an effort to select the best material available for an exciting exhibition. And in light of 264 entries submitted for consideration, one would think we were in for a blockbuster show. Here, Mary Gray, director of the Riffe Gallery in Columbus, and Susan Vincent of SPACES in Cleveland, selected 53 works by 43 artists. While second-guessing jurors’ criteria is generally an exercise in futility, I nonetheless wonder about it anyway. Honestly, there have been occasions when I envisioned myself grabbing jurors by the shoulders and shaking them just short of an assault charge, desperately pleading, “What on God’s good earth were you thinking?!” Case in point here: awarding Second Place to Michael Nutter’s unimpressively impressionistic oil painting, “Song of Chikadee.”

If, on the other hand, the goal here was to assemble a show that would be, in the aggregate, academic, safe, and pretty, then this is a gloriously successful celebration of the unremarkable. With some notable exceptions, to be sure.

Kristine Wyler’s spectacular oil, “Grand Finale,” makes another appearance in a group show and, short of being in the presence of the real thing, remains among the most stunningly executed sunsets I’ve ever seen. Stunning, too, is the pastel work by Brian Robinson, “A Twelve Dollar Balloon,” in good company with the masterful oil pastel work by Diane Belfiglio, “Potomac Patterns IV”. For impeccably designed pictorial structure and vibrant color, there is the large and marvelous still-life oil, “Braeburns and High Biskets” by Cleo Clark-Williams, along with the Third Place-winning watercolor, “Target on Times Square,” by Ted Lawson. With all due respect to Mr. Lawson (and he is due much), the decision to include three of his works in this show was glaringly indulgent. Any one of them would have been sufficient enough evidence of his particular esthetic.

And speaking of over-indulgence, more than a quarter of the works here are in the medium of photography (or digital enhancements), and most of those are irritatingly ordinary. Michele Waalkes’ “The Unknown,” which took Best in Show honors, is not a photograph in the strictest sense, but rather a photographic transfer on to sheer fibers. Still, it’s refreshingly elegant, original, and mesmerizing to behold.

The show is decidedly lacking in sculpture and very thin on abstraction. In the former category, Tom Wentling’s wood construction, “The Inevitable,” is a gem of pure mystery and dark charm. In the latter realm, the two large ink and pastel drawings by Becky Breckenridge are a surprising and needed blast of fresh air, even though they owe some debt, perhaps, to the “automatic drawings” of mid-20th century Surrealists.

In the end, it’s difficult to believe that the very limited presence of Stark County’s “cutting edge” contingent in this show is a result of those artists not submitting work for consideration. Short of taking a poll of both artists and jurors, however, we may never really know why they’re not here. In any event, their absence this year makes for a comparatively lackluster show that is ultimately a disservice to both the artist community and the public at large. Better luck next year.