A House On Fire 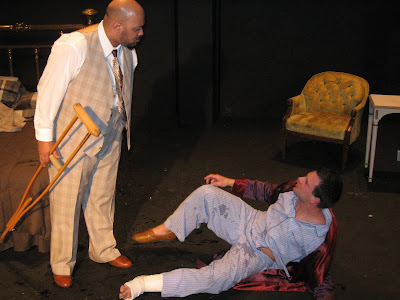 A House On Fire


I’m not sure when the word “dysfunctional” became the universal descriptor for damaged or destroyed human relationships, or socially aberrant behavior in our culture. But these days it seems like the term is ever on the tips of our tongues - an integral part of our social and medical vocabulary, and otherwise popularly if not reluctantly accepted as a given condition of modern life. Encountering the horrific interactions of dysfunctional families can be a bit like witnessing a house fire at too-close a distance. Morbid curiosity gets the better of us. Despite being singed by the heat, we just can’t seem to avert our gaze, mesmerized by the sheer scale of the devastation unfolding before us.

Tennessee Williams’ 1955 play, “Cat On a Hot Tin Roof,” has a similar effect. As stage literature, it is a searing, brilliant, and brutally honest examination of a dysfunctional Southern family. So honest, no doubt, to the producers of the 1958 film version, that they toned down the original language and content which they deemed too “controversial” for the movie-going public of the day. Measured by most of today’s entertainment standards and practices, though, Williams’ unedited script could be comfortably slotted into primetime television without remarkable fanfare or protest. Still, and interestingly enough, its themes remain both relevant and, to a considerable (though perhaps more palatable) degree, uncomfortable.

I can’t think of a more effective way to experience the full impact of this dramatic masterwork, however, than to see it performed live in a black-box theater context. So it is appropriate that the current Players Guild Theatre production of the work, directed by Jon Tisevich as one of the entries in this season’s Stripped Away series, is being performed in the intimacy of its William G. Fry Theatre. In that context, the explosive nature of the narrative, delivered here by a disarmingly credible and sharp ensemble cast, takes on a distinctly visceral, in-your-face urgency.

A troubled Southern family reunites to celebrate the 65th birthday of its dying patriarch, Big Daddy, a bitter and surly plantation owner who shamelessly flaunts disdain for his wife (Big Mama), and believes a false medical report that he doesn’t have terminal cancer. That’s just the first of many lies that fuel the frictions and hypocrisies dividing his sons, Brick (childless with wife Maggie, “The Cat”) and Gooper ( three children and a fourth on the way with wife Mae), vying for the family fortune. Brick, clearly Big Daddy’s favorite son, is an ex-pro football player who turns to alcohol after the suicide of his best friend and former teammate, Skipper. Suspecting Maggie of having an affair with Skipper, he refuses to have anything to do with her, and is completely numb to her passionate pleas for reconnecting on any level. As the story unfolds, it’s clear that brother Gooper, Mae, and Maggie have seriously questioned the depth and nature of Brick’s relationship with Skipper, stoking Brick’s drunken outrage at the very idea of homosexuality. Lies, innuendos, resentments, greed and jealousies smolder and eventually ignite into a thunderous confrontation of confessional rage between Brick and Big Daddy in Act II that in turn overruns the entire family in Act III.

The performances offered by the cast here are, in general, so crisply defined and genuine that they take on nearly operatic proportions. As Maggie, Tiffani Hilton turns in a largely seamless, powerful, and authentic portrait of a witty, sensual woman - lonely, and desperate for loving attention, while consumed by longing, envy, and suspicion. Both Jennifer Davies as Mae, and Daryl Robinson as her husband Gooper, are well matched to their roles that at first seem understated and inconsequential. But as the story unfolds, their skillful display of feigned affection for Big Daddy is really an effective burlesque - a subtle (and very integral to the story) masking of their cocky airs and egocentric sense of entitlement. And Carrie Alexander Spina as Big Mama delivers a convincing presentation of the doting matriarch whose stubborn denial of the realities around her turns from bubbly, delusional naivete to a torrent of tearful, very real frustration and anger.

But it is the marvelously crafted volcanic crescendo of unguarded emotional tensions between Big Daddy, played by Christopher Gales, and Brick, played by Aaron Brown, that sears this story into our memory. Gales is a monumental force to be reckoned with, both as his character and in his riveting presence as an actor. Equally, Brown has immersed himself in his role with astonishing, even scary intensity.

Tisevich’s choice to cast two black men in this production – Gales and Robinson - would seem, at the very least, curious. But in so much as the play addresses the decaying dynastic system of Southern society and its attendant moral flaws, the casting points unapologetically to the play’s larger indictment of dysfunctional behavior in general. So as audience, we are effectively absorbed into sordid truths of the human condition regardless of historic or geographical setting. “Mendacity is the system in which we live,” Brick reminds his father. Moral turpitude respects no boundaries - neither chronological nor demographic. Mendacity. A system of lies.

The play ends on an exhausted yet subtly hopeful, perhaps even redemptive note. Catharsis is necessarily painful, and born only out of confession. Call this production an eminently successful exercise in honesty and courage.


Photo, courtesy Jon Tisevich: Christopher Gales (left) and Aaron Brown in a scene from “Cat On a Hot Tin Roof,” at the Players Guild Theatre, 1001 Market Avenue N., Canton, Through February 7. Shows at 8p.m. Friday and Saturday, 2:30p.m. Sunday. Box Office (330) 453- 7617 or visit www.playersguildtheatre.com
Posted by Tom Wachunas at 5:44 AM

Thank you for coming to see our production of Cat on a Hot Tin Roof at the Players Guild. I am delighted that you enjoyed it. I would like to invite you to see one of our final 3 productions of Crazy for You at Kent Stark's Theatre. We play this weekend on Fri and Sat at 8pm, and Sun at 2:30pm.