All Noisy on the Western Front 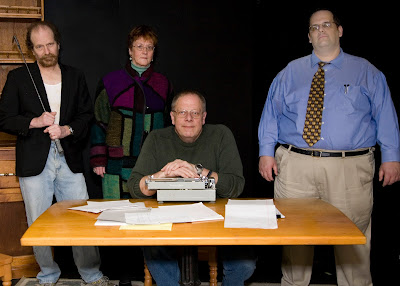 All Noisy on the Western Front


On its surface, Sam Shepard’s 1980 play, “True West,” is a jarring tale of sibling rivalry between two estranged brothers who clash in their mother’s suburban Southern California kitchen while she’s away on vacation in Alaska. Austin, an educated family man, is house-sitting, busily working on the movie screenplay he hopes will finally launch his Hollywood career. The unexpected arrival of his disheveled, nere-do-well brother, Lee, a beer-guzzling petty thief, puts an end to Austin’s concentration, bringing an ominous meaning to the notion of writer’s block. In a surreal turn of events, Austin’s producer, Saul Kimmer, decides to back Lee’s as yet unscripted, lame idea for a modern Western. This shatters Austin’s hope for show business glory, and hurls the brothers into a bizarre role reversal, culminating in a murderous confrontation in the presence of their befuddled mother.

I recently read excerpts from an old interview with Shepard, wherein he said that the play was simply intended to be a look at the reality of human “double nature,” without the trappings of epic symbolism or metaphor. Fair enough. The play can arguably stand on its own as an engaging enough two-faced romp at once comedic and tragic, absurd and all too real. Still, the story is so intricately laden with the characters’ present circumstances and past remembrances (both overt and veiled) that it fairly screams for drawing a bead on larger “issues.” If nothing else, and for all of its quirky hilarity, it is nonetheless difficult not to see this play as a sobering examination of the volatile gray area – or white noise - between societal approval of our dreams of cathartic adventure, and the consuming repression of our cynicism, our darker longings, and our failures.

Was it a secret potion that director Phillip Robb slipped to his cast members that caused them to embrace their characters (or caricatures?) with the startling confidence and credibility they so generously display here? In the intimate black surround of the Kathleen Howland Theatre, that credibility is necessarily – and in this case, flawlessly - magnified. So call it the wizardly product of Robb’s 38 years of directorial experience in Canton (including 138 plays at Kent State University Stark campus), in concert with the remarkable acting abilities of the performers. Once again Robb demonstrates an edifying grasp of a story’s heart muscle, while recognizing his actors’ considerable gifts for giving it breath and breadth.

In the role of Lee, the electric Verne Davis is indeed a live wire, dancing and sputtering about as he boasts about his illicit activities in the desert and in suburbia while flinging resentments, insults, and taunts at his brother. As Austin, Rod Lang delivers an equally riveting portrait of a proud but vulnerable man increasingly frustrated and disillusioned by both his unrefined, hurtful brother, and his life as a whole. The entire play evolves within a constant state of growing tension between Davis’s mischievous charisma and Lang’s amplified fragility. A strangely poignant respite from the growing storm between their characters comes during the second act. Here, Lang’s besotted character is sprawled on the floor. He truly owns the stage as, with delicious drunken abandon, he relates to his brother the insane, hilarious story of how their father lost his teeth to a cheap dentist in Mexico.

Barry Wakser as Saul Kimmer turns in a somewhat understated reading of the Hollywood producer. But his amiable if not cloying nonchalance works effectively to fuel the irony of the situation (and Austin’s bitterness), particularly with his glib assessment of Austin’s screenplay for a love story: “Nobody is interested in love these days, Austin…”

When Denise Robb makes her brief but very memorable appearance as the mom returning home earlier than expected, she finds an unholy mess. There is an air of quiet desperation about her as she surveys the chaos, her eyes distant and glazed as she notices her dead houseplants. She regards her sons as squabbling boys who need to take their fight outdoors. They don’t, and this is how their frontier dreams of artful adventure ended – not with a bang but a phone cord strangle-hold on the kitchen floor.

The play concludes with an irresolute freeze-frame, leaving us with lingering questions about the brothers’ struggle. One is: Have we commodified art to the extent that its ideals are no longer relevant to a meaningful or fulfilling life? This performance makes the question a compelling and oddly beautiful one to consider.