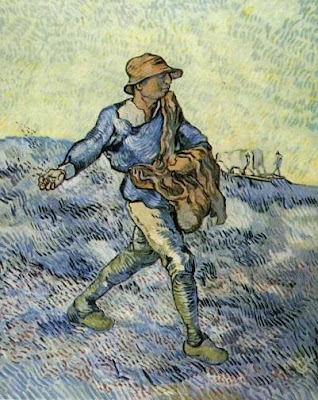 
Though I didn’t know it at the time, the course of my life as an artist was plotted and set by the early 1970s. At that point during my undergraduate studies in painting and drawing at The Ohio State University, the provocative and controversial Dexter Sandap (who unfortunately has long since fallen out of the public eye) was a visiting artist in the Department of Fine Art and had installed a sprawling one-man show at Hopkins Hall Gallery. I vaguely remember all the surrounding publicity hype. I also remember what appeared to be an entourage of art student assistants responsible for the actual mounting of the work in the gallery. They in turn seemed to be supervised by a faculty member who invariably left an impression on me every time we wordlessly passed each other in the halls. The wire-rimmed, black-tinted glasses he wore (often indoors) added much to the mystery that seemed to hover around him like an aura. I promised myself I would meet and talk with him some day.

And so I did. Within the year (or was it two?) following the Sandap exhibit, I was a member of the “entourage,” mounting yet another sprawling gallery show – this one called “The K-S Dimension.” This astounding and ambitious exhibit was comprised of objects discovered by world-famous astrophysicists Kreunstra and Struckhold. They theorized that most of the artifacts on view were actually ordinary household objects from earth, appropriated by aliens from another dimension, then “sent back through” in various altered states as an elaborate attempt to communicate with us. Most of the show looked suspiciously like 1970s modern art.

The K-S Dimension was, of course, a complete fiction - its pictures and objects meticulously fabricated by undergraduate studio art students enrolled in “Intermedia,” which would ultimately become known as Expanded Arts. So too Dexter Sandap. In fact, Dexter Sandap was an anagram for Expanded Arts. The “supervisor” for these projects was Professor E.F. Hebner – “Hebe” to his many friends and students.

In those days, it seemed to me that explaining just what it was that Hebe was teaching, or the art that his students were making, was always a challenge most vexing – a futile exercise in justifying to our many critics the purely ephemeral processes we engaged. But there were at least as many enthusiastic supporters who knew what we knew: This was something utterly original and exciting, and worth pursuing.

Hebe didn’t “teach.” He simply gathered witnesses to look at a thing long and hard, and thereby encouraged seeing. His methods weren’t instructional. They were invitational. What we “learned” wasn’t something quantifiable or formulaic that we memorized and repeated on command. Under his guidance we embraced and celebrated the magic of metaphor and the poetry in our own identities. Our canvas was the vastness of possibility itself, upon which we rendered fresh, wild configurations of light and sound and movement unfolding in time. I often refer to him as my artistic mentor, realizing full well that such an assessment of the man is far too narrow. He was for me the revealer of vision itself, a milieu, an expanded, life-long moment of discovery. And I know that in his endearing humility (I can just see him blush right about now) he might well resist such measuring. No matter. I’m not quite finished.

Hebe passed away on March 9. He was 84. I was privileged to see and review (herein, July 26, 2009 post, “Abstractitudes”) his last one-man show in Columbus. Looking back at the close of that review, the words seem hauntingly relevant to not just paintings, but a life beautifully lived and shared. “As viewers we become privy to exposed essences floating in a kind of dream state. And as with all good dreams, these images resonate and linger, gentle in their clamoring to be remembered.”

Hebe was a skilled, passionate gardener. Over the years he encouraged my own avid pursuit of gardening. He would be pleased, I think, to know that I regard the garden as both ongoing piece and ongoing peace. And while the man himself no longer clamors gently in paint or soil, I will remain forever inspired and nourished by the sweet fruits of his labors, grateful that he planted his life so lovingly in mine.

"A recent review alluding to Sandap's sudden shifts in style and approach called him 'bizarre and inconsistent,' failing to grasp that this shifting, kaleidoscopic attitude is the basis of Sandap's art. The very metapmorphosis that changed Dexter Sandap from a midwestern nobody into one of today's more respected tradition-breaking artists is still at work. Change itself is Sandap's trademark as a growing artist in these changing times." -From The Sandap Story by Tex Spaderano