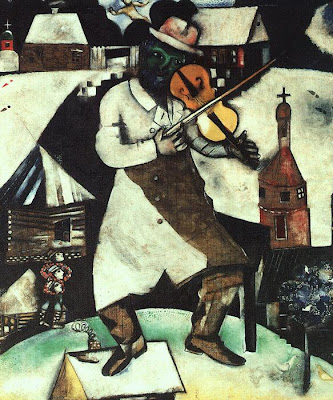 
Everything about the current Players Guild Theatre production of “Fiddler on the Roof,” directed by Jonathan Tisevich, indicates a masterfully crafted conspiracy to entice. The set, with its tiered stage and sweeping, wooden wings, reads like an austere, sculpted collage - an abstraction of Old World atmosphere - successfully conveying a ramshackle yet dignified Jewish village in 1905 Russia. The lighting is a lush tapestry of color washes alternately warm, cool, often haunting. The costumes are authentic right down to the last cap, kerchief, and fringed prayer shawl. And the live eight-piece orchestra, under the direction of pianist Steve Parsons (and always in perfect aural balance with the actors’ vocalizations), is a facile interpretation of the Yiddish musical milieu – airy and plaintive, as well as infectiously celebratory.

The story is set in Anatevka, Russia, and built around the poor Jewish dairyman, Tevye, his wife, Golde, and their five daughters as they negotiate tough times under an oppressive Tsarist regime. “Without our traditions our lives would be as shaky as a fiddler on the roof,” Tevye explains in the prologue. He adds that the villagers’ devotion to God’s law is the only way to keep balance in their difficult lives.

Then, the full 31-member cast delivers the opening song, “Tradition.” It’s one of several songs (including “If I Were a Rich Man” and “Sunrise, Sunset” among others) that have assured this production a place in the canon of American musical theatre as an endearing, true classic. But the performance of “Tradition” here is more than just endearing. It’s a glorious, explosive display of choral thunder that sets the tone for the story’s approaching storms. Those storms are in the form of various challenges to Tevye’s confidence and security in the traditions he holds so dear, threatening to tear his family – and his village- apart.

Both Larry Weinberg as Tevye, and Carol Sampsel as Golde, look, speak, and sing their parts with commanding, uncanny finesse. Weinberg is utterly magnetic as he soliloquizes and prays about his plight, always with a sparkling glint of both sad resolve and hope in his eyes. Sampsel is every bit the watchful, earthy housewife, her sometimes stern demeanor sweetly tempered by her motherly doting. Together they deliver one of the evening’s most tender and heartrending moments as they sing to each other “Do You Love Me?”

Heartrending, too, is the soaring purity of Amanda Medley’s voice in her role of Tevye’s daughter, Hodel, as she sings “Far from the Home I Love.” In another of many memorable scenes, Jason Green, playing the tailor Motel (pledged to marry Tevye’s oldest daughter, Tzeitel), cavorts and sings “Miracle of Miracles” with boyish glee, overjoyed at his arrival into full manhood. And For sheer show-stopping spectacle, there’s the scene of Tevye’s dream, wherein he is warned that Tzeitel will die if she marries the butcher Lazar. Lazar’s first wife, Fruma-Sarah, appears as a 10-foot tall ghost to deliver the warning. In that brief but unforgettable role, Courtney Vignos is electrifying as she deftly melds hilarity with hysteria.

Choreographer Michael Lawrence Akers has fashioned an engaging collection of dances imbued with folksy charm as well as solid athleticism. Nowhere is that combination more riveting than in one of the wedding dances featuring several village men performing a dance while balancing wine bottles on their heads as the enthralled women cheer them on.

In his program notes, director Tisevich presents a compelling case for seeing this production as a relevant, even urgent message for our own time and current societal malaise. Against the scrim, as it were, of the recent Forbes Magazine determination that Canton and Cleveland are miserable places to live, he asks the audience to consider identifying and playing its own “part,” like the people of Anatevka, in advancing a tradition of hope, compassion, and joy in the real world. The idea resonates all the more poignantly when seen in the light of the musical’s closing scene. The ever-present Fiddler passes his fiddle on to the next generation as it trudges resolutely into an uncertain future.

So once again Tisevich has, with a remarkable community of truly exceptional local talent, facilitated a powerful and inspirational theatrical experience. For the Players Guild Theatre over the past few years, this has indeed become a …tradition.

For other reviews and commentaries on the performing and visual arts in the greater Canton area, visit ARTWACH at www.artwach.blogspot.com
Posted by Tom Wachunas at 4:10 PM