An Eloquent Synthesis of Light and Form 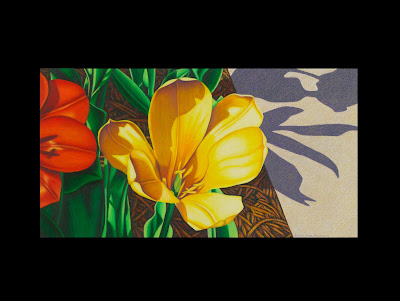 An Eloquent Synthesis of Light and Form


A hearty congratulations to local artist Diane Belfiglio on her solo show at the Butler Institute of American Art in Youngstown. The show, called “Transitions,” opens this Sunday, February 13, from 1 to 3p.m. in the Giffuni Gallery, and runs through April 3. The small but stunning catalogue is now locally available for $6.00 at The Canton Museum of Art, The Massillon Museum, and Second April Galerie. This is one very beautiful show, and well worth your time and travel. What follows is the catalogue essay that I was honored to write.


My first encounter with the work of Diane Belfiglio was in 1998. I say ‘encounter’ because I remember not merely ‘looking at’ them so much as feeling immersed in, and bathed by, their sumptuous light. Not a captured or illusionist light, but a light that seemed to actually, even magically emanate from the picture plane itself. It was a pleasantly haunting light, faintly suggestive of Edward Hopper’s work without the loneliness, or the great Impressionists, such as Monet, sans impasto. How was this possible with such flatly applied acrylic paint? It was clear to me that the artist was by then an accomplished master of illuminated color and its subtle interactions with precisely rendered, hard-edge architectural forms and their shadows.

In the years since those earlier canvases, Belfiglio never faltered in that mastery, and continued to explore the aesthetic marriage of light and architecture- the joining of the ephemeral to the physical – with consistently enthralling results. While maintaining a disciplined eye for tight structuring of well-defined shapes with intriguingly- cropped perspectives, she would become ever more adept at imbuing her images with real warmth and optimism. For all of their crisp faithfulness to the recognizable world, her images never succumbed to the often cold and numbing flamboyance of Photorealism, even though the camera remains an invaluable tool in framing her imagery.

Since venturing into the medium of oil pastels in 2008 with her Jamestown Geometry series, Belfiglio has honed her vision still further. The point-counterpoint play between solid, detailed volumes and shadows (equally solid in appearance) that characterized her architectural paintings was still very much present. But the quantity (and variety) of architectural shapes was reduced, and the overall structuring of the pictorial information was becoming more distilled. While the imagery remained ostensibly representational, a more refined sort of ‘abstraction’ was emerging in the sense that her compositions were becoming purer and simpler. These were intriguing articulations of light-drenched patterns, as in Jamestown Geometry IV, exuding a soft, lyrical quality. That softness and lyricism is in large part intrinsic to the pastel medium, which lends itself well to laying in subtle color areas by overlapping short, mincing strokes. Additionally, her exacting technique brought a refreshing, visually textured surface interest to her images.

The artist continued to combine and, and she has stated herein, streamline these elements through her Potomac Pattern series, as in her elegant Potomac Patterns II. Physical architecture was still a focus in the following Mount Vernon Memories series, as we see in the sure-handed simplicity of Mount Vernon Memories III. A consistent aspect of these series is that when she incorporated natural forms (tree foliage, or a patch of grass, for example) it was as a supporting accent, or backdrop. But a shift in focus – a reversal, really - was immanent. It began to present itself as she realized that the oil pastel medium seemed more effective in rendering organic forms rather than the crisp junctures and surfaces of brick walls, planed wood trim, and concrete that she had mastered in her acrylic paintings. By 2010, the predominant formal content of her images had fully evolved into floral themes, with a gently reminiscent nod to Georgia O’Keefe’s stylized abstractions of lush blooms.

These most recent works are an eloquent, graceful maturing of Belfiglio’s overall aesthetic concerns. M.J. Albacete, Executive Director of the Canton Museum of Art, has recently written that, “…her oil pastels – true to the medium- are layers of blended color that seem to come from the hand of a dual personality. She is both a colorist and a precisionist, and pretty much without equal in the contemporary art scene.” And Louis Zona, Director of the Butler Institute, has observed (in his statement for this catalogue), “…I would suggest that Diane Belfiglio’s compositions are extraordinary examples of formalism and demonstrate a wonderful understanding of the effectiveness of a strong visual organization in the delivery of a concept.”

Indeed, it seems to me that the concept of achieving a pure and mesmerizing synthesis of form and light has been at the heart of this artist’s creative pursuits all along. In a statement that accompanied her exhibit at Canton’s McKinley Museum in 2001, she had written, “I was educated in a professional art world that has been characterized by its shock value, biting social commentary, and ‘in-your-face’ commercial images. In contrast to that world in which I was raised, I am simply endeavoring to create in my art a respite for weary souls.” Ten years later, that statement still speaks to her consistent creative vision and aesthetic standards, and resonates deeply in our splintered culture so often enamored of pop junk, ugly sensationalism, and collective angst.

Belfiglio’s floral drawings – with their astonishingly luminous colors and wondrous detail – are exuberant, uncluttered constructions of serene jubilance. To this body of work the artist has brought an increased, vigorous compositional elegance. In several of the drawings, such as Sunlight on Scarlet and Daffodil Diagonals III, she employs a diagonal thrust to great effect, investing them with a sense of quiet drama. You could regard them as you would concerto orchestrations. Think of the luscious blooms as joyous solos, soaring above, but in exquisite harmony with, the richly supportive shadows.

The underlying spirit of bon homie in these drawings is a compelling and unabashedly beautiful witnessing of light, at once fleeting and imperishable, amid our postmodernist milieu of noisy, dark pluralism. As such, they are inspiring, persistent acts of courage. And I dare say, with this show, she has arrived.